How the economics of urbanization changes between rich and poor nations

Insights about the economics of cities have been developed largely from studies in the United States and Europe. But do these insights apply with equal force in the developing world, where in coming years the majority of the world’s urban population will reside? The authors of “What Is Different About Urbanization in Rich and Poor Countries? Cities in Brazil, China, India, and the United States” explore whether key concepts about the patterns of urbanization in wealthy, largely Western nations apply more generally.

READ MORE: An explanation for the rise in CEO pay? Stable option grants

Juan Pablo Chauvin, Edward Glaeser, Yueran Ma and Kristina Tobio focus on three concepts: spatial equilibrium, the notion that differences in wages are offset by differences in costs of living and amenities across metropolitan areas; human capital externalities, the proposition that the productivity of workers of similar characteristics is larger in better-educated areas; and agglomeration economies, which suggest that urban density and proximity increase productivity and local economic success. They find limited support for the spatial equilibrium concept in developing nations, but they find evidence in favor of both human capital externalities and agglomeration economies. 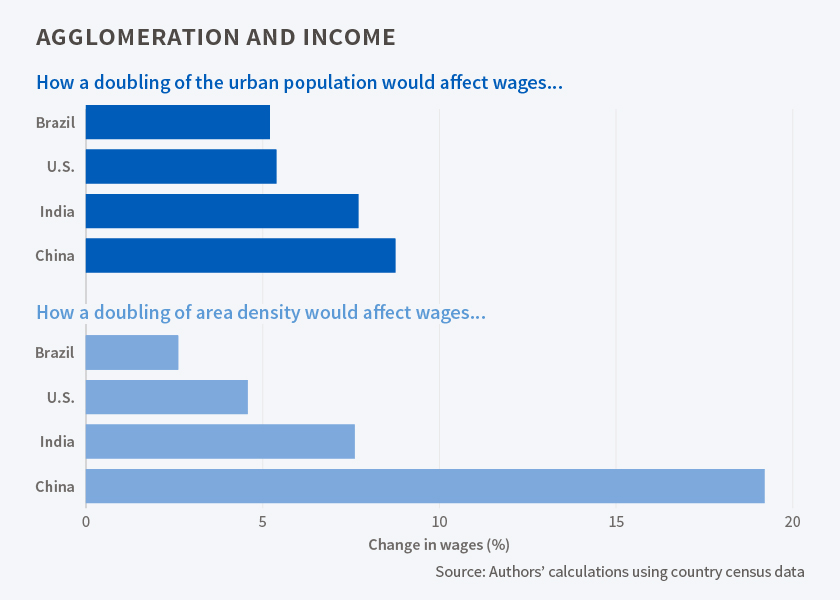 The researchers test for spatial equilibrium by investigating if rents rise when earnings rise, if real wages decrease when natural amenities are more desirable and if income is uncorrelated with self-reported happiness. They find exceptions to all three of these predictions of spatial equilibrium. Rents respond strongly to earnings in the U.S., Brazil and China, but not at all in India. In the U.S., real wages are lower in areas with the natural amenity of temperate climate, with average temperatures near 70 degrees Fahrenheit. But the researchers find no relationship between climate and real wages in India or China, and in Brazil, real wages are higher in more temperate areas, primarily because nominal wages are much lower in Brazil’s hottest regions. There appears to be a positive income-happiness relationship across Chinese and Indian metropolitan areas, but less so in U.S. cities.

READ MORE: Minority students get a boost from high-achievement classes

Skills appear to matter for urban success, and agglomeration increases productivity in all four countries studied. But the data from the United States are noticeably more consistent with spatial equilibrium than the data from Brazil, China or India. Why? One explanation, say the researchers, is that “the spatial equilibrium framework is not particularly relevant in poor, traditional economies, where human-capital heterogeneity is enormous and people remain rooted to the communities of their birth… It seems quite possible that spatial equilibrium emerges with development as human capital becomes more widespread and as people turn to markets instead of traditional social arrangements

Left: A night view of the old houses surrounded by new apartment buildings at Guangfuli neighbourhood in Shanghai, China. Photo by Aly Song/Reuters