The role of women in civic, political and economic life has expanded slowly but steadily over the past century, as women have secured voting rights and assumed increasingly diverse and powerful positions in the public and private sectors. Yet measuring the impact of this inclusion has been challenging, in part because it has been difficult to find examples of women taking on new roles in which they do not reflect the views of those who elected or appointed them.

In “A Jury of Her Peers: The Impact of the First Female Jurors on Criminal Convictions,” Shamena Anwar, Patrick Bayer and Randi Hjalmarsson analyze verdicts in England before and after women began sitting on juries in criminal cases.

England’s Sex Disqualification (Removal) Act of 1919 provided a unique opportunity for the researchers to study the effect of female jurors on real-world decisions well before women being on juries in equal numbers to men became the norm and made it more difficult to measure how gender influences results. They found the inclusion of women was followed by large, significant changes in some conviction rates, specifically for sex offenses and violent crimes against women. 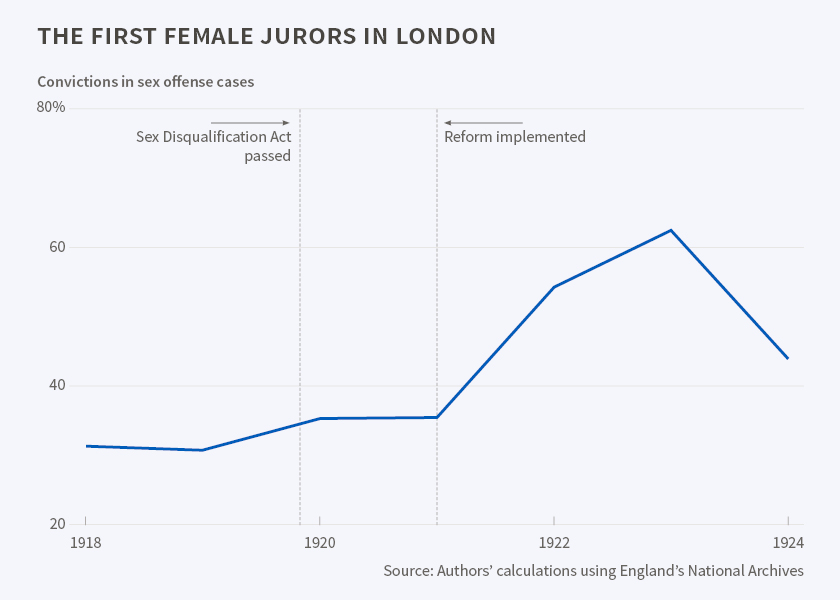 The researchers reviewed hand written records of more than 3,000 cases in the Central Criminal Court of London and surrounding communities from 1918 to 1926. The Sex Disqualification (Removal) Act was implemented in 1921, and court records immediately before and after implementation provide a wealth of information about the types of cases, verdicts, gender of defendants, victims, jurors and other valuable data.

Meanwhile, there was a decrease of 10 percent in the conviction rate for property crimes and 13 percent for violent crimes overall. There also was an important shift in conviction rates within the violent-crime subcategory. Prior to implementation of the act, the conviction rate differential between crimes involving male and female victims was essentially zero. After the reforms, that conviction rate differential changed dramatically, with cases in which the victim was a woman now 20 percent more likely to lead to convictions compared to cases in which men were the victims. The inclusion of women also increased the likelihood of juries being discharged without reaching a verdict on all charges and increased the average time taken to reach a verdict.

“Taken as a whole, the results of our analysis imply that female representation on juries substantially affects the likelihood of conviction for a subset of cases — sexual and violent crimes — in which female jurors might have viewed the alleged behavior or its impact on the victim from a different perspective than their male counterparts,” the researchers conclude.

Left: A view inside Courtroom 201, where jury selection is to begin. Photo by Brennan Linsley/Pool/Reuters