Editor’s Note: A few weeks ago, we asked you to take the bubble quiz, based on Charles Murray’s 2012 book, “Coming Apart: The State of White America, 1960-2010,” meant to test how well you knew the average white American. Today, Charles Murray continues his exploration of the scores and ZIP codes from the bubble quiz in a third post. You can find his first post analyzing the results here and his second here.

The scores on the bubble quiz are fun to play with, and they provide insights into the geographic profile of social isolation among the new upper class. But one of the richest aspects of the dataset that the PBS NewsHour has made possible is the information that respondents provided on the ZIP codes where they lived at age 10, the ZIP code where they live now and their ages. It brings a very large sample — more than 57,000 when I conducted this most recent analysis — to bear on the issue of how successfully the new upper class perpetuates its status into the next generation. Today, I’ll give you early answers to two questions.

First question: How is the socioeconomic status percentile of your ZIP code at age 10 related to your chances of getting into an elite ZIP code when you are an adult (age 25 and older)? 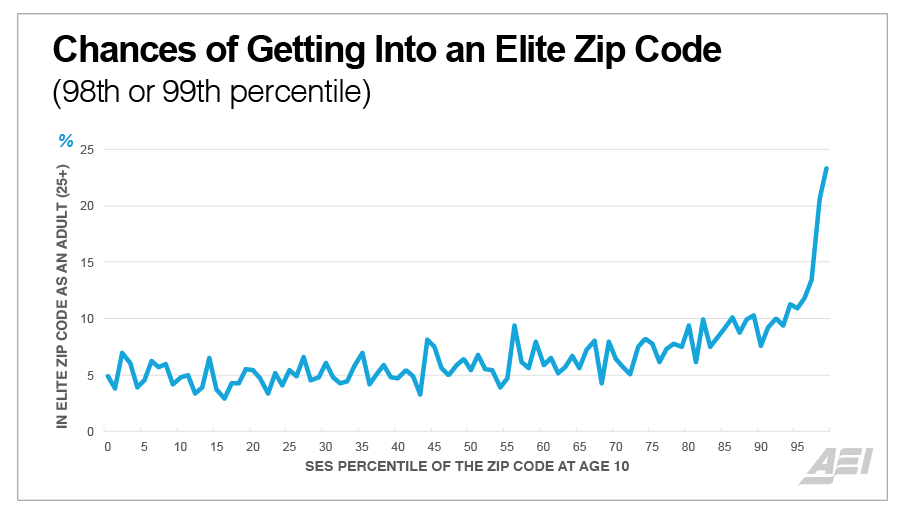 The good news is that as children, people in this sample at the very bottom of the ladder had nearly as good of a chance of getting into an elite ZIP code as those in the middle. The upward slope of the trend line from the lowest percentile through the 55th is nearly flat and doesn’t get much steeper thereafter — up to a point. For example, only 9 percent of people who were in a ZIP code at the 93rd percentile at age 10 got to a ZIP code at the 98th or 99th percentile as an adult, compared to 5 percent of those who were in the very bottom percentile at age 10. (By the way: the sample sizes were substantial across the range. The smallest sample size for a percentile was 246 and the mean was 486.)

READ MORE: What does your bubble quiz score say about you?

The bad news for those of us who like the idea of a society in which people go from shirtsleeves to shirtsleeves in three generations is that the youngsters in the elite ZIP codes at age 10 were strikingly efficient at staying right where they were — a 22 percent success rate for those at the 98th and 99th percentiles at age 10. 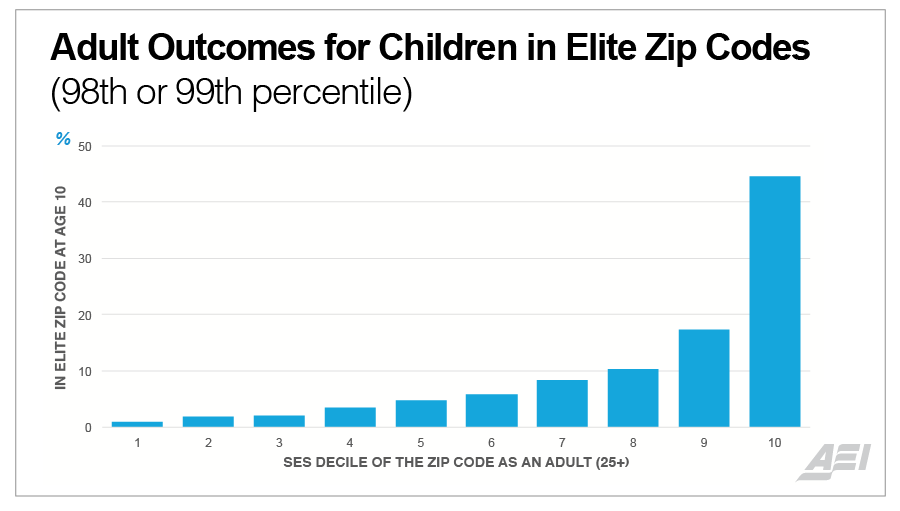 It is true that 78 percent of these privileged children fell down the socioeconomic status ladder, but most of them didn’t fall very far. Almost half of them remained in the top socioeconomic status decile. More than a quarter of the rest live in the ZIP codes in the eighth and ninth deciles. Only 13 percent of them live in ZIP codes anywhere in the bottom half of the distribution.

Some observations and cautions about these two graphs. First, we aren’t necessarily looking at parents who are using their own wealth and status to ensure that their children remain secure at the top regardless of their own ability. One of the themes of my own work, expressed in both “The Bell Curve” and “Coming Apart,” is that the last half century has seen a major increase in the incidence of highly talented people marrying other highly talented people. The nub of the argument: The highly successful male in 1950 was likely to have married the girl next door or perhaps an undergraduate classmate in his early 20s, in an era when few men thought that brains in a woman were sexy. The highly successful male by the end of the century was likely to have married later in life from a pool of women in his college or in his professional life who were just as talented as he.

When the most successful couples are passing along not just money to their children, but ability as well, status from generation to generation gets stickier. (Statistics nerds among you: Yes, regression to the mean moderates this effect, but doesn’t nearly eliminate it.) How much stickier is another question. Privilege may well have become more entrenched for reasons having nothing to do with the ability of the children in the next generation. I’m just saying that the situation is probably not as bad as it looks.

What about the skewed nature of people who watch PBS NewsHour and take the time to go online and fill out a 25-question quiz? Consider, for example, the people who were in the bottom few deciles of socioeconomic status at age 10, but as adults watch PBS and take online tests. It seems likely that these are skewed in the direction of people who have risen in socioeconomic status by adulthood, which implies (I think — I’m open to alternative arguments) that the percentage of those who started in the bottom and stayed in the bottom is underestimated, not overestimated, in the sample. On the other hand, perhaps those who were in elite ZIP codes at age 10 and are in low socioeconomic status ZIP codes today don’t watch PBS any more even though their parents did and are disproportionately unlikely to have taken the quiz. I don’t know how to balance out these alternative biases.

One other striking feature of the data: Both graphs are based on those who are now 25 or older. When I began the analysis, I said to myself that a lot of people in their late 20s and through their 30s are still getting started in their careers and can’t afford housing in the top ZIP codes. I expected to see growing proportions of older people in the top few socioeconomic status percentiles. Wrong. On the contrary, the regression analyses I have done so far indicate that the likelihood of being in the top few percentiles decreases slightly along with age after controlling for other factors. How can this be when it is impossible that the mean income of talented 25-year-olds is anywhere near their eventual income? One explanation is that the increase in earnings over the lifespan, and hence increased ability to live in a high-socioeconomic status ZIP code as one gets older, is more than counterbalanced by a birth cohort phenomenon, which would be consistent both with an increase in assortative mating and with an increase in the entrenchment of privilege.

I conclude with a caveat that you should apply to all the posts in this series: I am reporting the results of ongoing passes at the data that ordinarily would never see the light of day. There are many ways in which longer and more detailed examinations may lead me to modify or even discard some of the statements I have made. You are seeing what social science looks like in the “Isn’t that interesting?” phase, not the “Never mind” phase.

Left: Charles Murray continues his exploration of the scores and ZIP codes from the bubble quiz in a third post. Photo by Randall Hill/Reuters