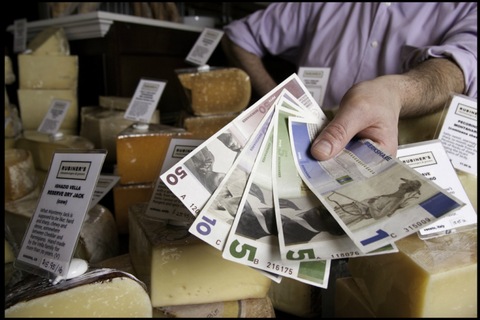 What if you used a different currency to buy a sandwich from your main street deli than you did to make a purchase at the Wal-Mart 10 miles outside town? “BerkShares,” the local paper currency of Berkshire County in Massachusetts, lets you do that. The popularity of BerkShares has ebbed and flowed, but with about $130,000 worth of notes currently in circulation, the number of businesses accepting the currency has jumped to about 400 from the 100 that initially participated in 2006.

Shooting a Making Sen$e segment on the phenomenon in Western Massachusetts, which is slated to air on PBS NewsHour Thursday, Paul Solman spoke with Alice Maggio, the local currency program director at the Schumacher Center for a New Economics in Great Barrington, named after British economist E.F. Schumacher, the author of the 20th century classic about acting locally, “Small Is Beautiful.” What follows is their extended conversation about the evolution of the currency, its reach and Maggio’s hopes for more region-specific currencies that would be used instead of the U.S. dollar. Keep the Business Desk tab open; we’ll return this afternoon with a web-exclusive video about artists in the Berkshires who use BerkShares.

Alice Maggio: BerkShares evolved from a lot of experiments in this area with local currency. There have been Berkshire Farm Preserve notes, Monterey General Store notes and Deli Dollars, all experiments in funding upfront the costs of a business that everybody believed in and everybody understood already. So the Deli Dollars was the best example of that. There’s a deli in town and it needed to move but the owner couldn’t get a bank loan. So he turned to his customers and asked: Will you fund my move? And so he issued Deli Dollars. The customers could buy a Deli Dollar for $8 that was worth $10 when redeemed. So he basically financed his own move.

Paul Solman: So then how did BerkShares start?

Alice Maggio: Well, after these different experiments, the merchants on Main Street in Great Barrington said, “Hey, we want to do the same thing. We’re local businesses; we need some support, too.” And so they worked out a program called BerkShares in the early ’90s. It was sort of like a promotion: during the summer you could get one BerkShare with every purchase you made from a local business, and then at the end of the summer, there was one weekend where you could redeem them. And from there, people said, “Well, why are we doing this just in the summer? Let’s just do it all the time.”

Paul Solman: And so when did it become a viable alternative currency?

Alice Maggio: BerkShares were issued six-and-a-half years ago, in 2006, and they’ve been issued through 13 branches of five local banks, where you can exchange dollars for BerkShares. And then you spend them in the local businesses. So we started off with maybe 100 businesses participating in 2006 and we’ve grown to about 400 businesses.

Paul Solman: So how many BerkShares are in circulation?

Paul Solman: And how much money in BerkShares are in the vaults of banks?

Alice Maggio: We printed about $1 million worth of BerkShares and we’ve estimated that 4.3 million BerkShares total have gone out of the banks. Obviously they have come back in and circulated through.

Paul Solman: How widely can I use BerkShares?

Alice Maggio: Well, there are so many different kinds of businesses that accept BerkShares. There are excavators, dentists, lawyers, accountants…so there’s lots of services…

Alice Maggio: Tanglewood doesn’t accept BerkShares yet, but there are lots of arts organizations. There’s the Mahaiwe Theater, which is an old vaudeville theater that’s beautifully restored. We just bought tickets for a show in October using BerkShares. We’re also putting on a big BerkShares event there in the fall. Then there are all sorts of goods that are produced here. There’s lots of local food, lots of restaurants that accept BerkShares. And then there are things like ukuleles that you can buy with BerkShares and that are produced right here in the Berkshires.

Paul Solman: Geographically, how far can I go before I run out of places that will take BerkShares?

Paul Solman: That’s within the county.

Alice Maggio: It is. It’s a little bit beyond the center of BerkShares’ activity. BerkShares are usually used in south county, because that’s where the banks are that have them in the vaults.

Paul Solman: So would you be happy or unhappy if Wal-Mart signed on?

Alice Maggio: Well, we don’t really worry about Walmart signing on because Wal-Mart is sort of antithetical to the BerkShares spirit. We want to support locally owned stores that are employing people with living wages and producing things here for local consumption. Wal-Mart’s business model is to export the money they take in to their corporate center. So it wouldn’t make any sense for them to take BerkShares because BerkShares stay here.

Paul Solman: Well, but it would make sense if everybody in town was using Berkshares and would stay away from Wal-Mart because Wal-Mart didn’t accept BerkShares, right?

Alice Maggio: I would be very surprised if Wal-Mart started accepting BerkShares, but it would be a good thing because it would be an indication that they were interested in the local economy.

Alice Maggio: I don’t think McDonald’s will happen any time soon. We have a chain supermarket here that’s owned by a company out of Springfield and when BerkShares first started they looked into the program, but they realized that it just didn’t match up because if they were taking in BerkShares, they would have to change them all to dollars, which they could do, but then they would be losing 5 percent of what they had taken in. It just didn’t make sense for their model.

Paul Solman: We were told that initially, there was a lot of action in BerkShares, then less and now maybe a little bit more. Is that an accurate reflection of what’s happened?

Alice Maggio: Well, I think that the interest in BerkShares and the use of BerkShares goes up and down, because you have to be constantly reminded about something that’s out of the ordinary. So people often go back to using U.S. dollars, or credit cards especially, because it’s just easy. And BerkShares are just a little bit out of your normal habit.

Paul Solman: But wouldn’t it be a bad thing if every community in the world was simply trading within itself?

Paul Solman: So that’s why you call it a complementary currency?

Paul Solman: Could you imagine, in your wildest dreams, that BerkShares might become preferable in some people’s minds to the U.S. dollar?

Alice Maggio: That is our goal: to create a currency that holds its value, as opposed to a currency like the dollar that’s inflating constantly, and at that point people will want to use BerkShares. But they’ll only use them within this region and then there’ll be other regional currencies elsewhere, but the goal of BerkShares is to provide affordable and appropriate capital for businesses here in the region.

Paul Solman: How would you make it so that BerkShares don’t lose their value?

Alice Maggio: Well, you have to base it on real production and this would be issuing currency at the point of making a productive loan. That’s something that we used to be accustomed to in this country. Savings and loans banks used to make loans out of saved money, and commercial banks used to make loans out of invented money. So that’s what we’d like to do now; we’d like to issue currency as a productive loan.

Paul Solman: So give me an example.

Alice Maggio: The simplest one is a farmer who needs start-up capital in the beginning of the season. So you issue a little bit of currency, knowing that he will use it to buy seeds and then produce a lot of product that people want and need in this region. So when you issue that little bit of currency, it’s backed by the future production of the farmer because the people issuing the currency (the loan committee) know the farmer, know his business history and know that there’s a market for his local cabbages, tomatoes, cucumbers, squash and lettuce.

Paul Solman: But of course, I could take out a loan, say, for a blimp, and you all could think, “Looks like a productive loan; he’s going to ferry people back and forth from Boston to the Berkshires.” And then the Hindenburg goes up in flames and people get scared of taking blimps so I go out of business.

Paul Solman: You also said you were going to try a basket-of-goods-based evaluation model.

Alice Maggio: Yes, that’s basically what you’re doing when you issue currency for different productive purposes. We’re not going to issue only to farmers, or only to bakers, or only to hi tech; we’re going to issue to a broad range of import-replacing businesses — businesses that are producing things that we have been importing. That way if it’s a bad year for farmers, your currency isn’t going to lose value if all the farmers have a hard year. You’re going to have this balanced way of keeping your currency sound.

Paul Solman: But it’s tricky to do this, right?

Alice Maggio: Yeah, of course it’s tricky, but it’s not beyond us. We used to do this. The difference is that BerkShares is a non-profit organization run by a community board, so it’s not a for-profit bank that’s issuing currency.

Paul Solman: But it could become politically dominated by one group that could get more money loaned to it than to others, and then you run the risk that if that group, that industry fails, the currency is in trouble, right?

Alice Maggio: That’s true, except that the membership in BerkShares is open to the public in this region. Anybody can join, anybody can run for election to the board and the board is elected by the membership.

Issuing currency through productive loans is a way of sharing the risk for entrepreneurs because right now entrepreneurs shoulder all that risk themselves, but this way you allow the community to invest in the businesses they want to see in the region. And that way, if you make 10 loans and one of them goes bad, yes, your currency’s going to lose a little value, but the community has already said, “That’s okay. These other loans are going to hold their value and we’ll be okay. We’re going to make it in the long run.”

Paul Solman: So it’s like the community as bank.

Paul Solman: Have any people begun to hoard BerkShares? I was looking at them and thinking, if they’re really backed by productive value and the U.S. dollar is in danger of inflating at some point, maybe I should just hold on to some of these BerkShares for a while.

Alice Maggio: Well, right now we’re still tied to the dollar. We’re not yet at the point of being an independent currency that holds its own value. But if we did become independent and worth more than the dollar, then I don’t know what would happen.