President Donald Trump’s threat to impose tariffs on Mexico in an effort to reduce the number of migrants crossing the southern U.S. border is sending ripples through the two nations’ economies and putting a key trade deal at risk.

Companies that do business with Mexico saw their stocks fall sharply Friday amid fears that the tariffs would cut into profit margins.

Investors have reason to fear. Earlier this year, Mexico became the United States’ largest trading partner, surpassing Canada and China. The U.S. also buys about three-fourths of the goods Mexico exports. All of those goods exported to the U.S., which amounted to $346.5 billion last year, would be subject to the tariffs.

Trump said Thursday he would impose a 5 percent tariff on all goods imported to the U.S. from Mexico beginning June 10. If Mexico does not take steps to reduce immigration, the tariff would increase to 10 percent on July 1; 15 percent on Aug. 1; 20 percent on Sept. 1; and 25 percent on Oct. 1.

The White House did not outline specific steps Mexico would have to take to avoid the tariffs, saying it will instead be up to “our discretion.”

Trump tied the trade policy to immigration. The president has pushed Mexico to take military action to stop the flow of migrants from Central American into the U.S. In a tweet Friday, Trump said Mexico would also need to “take back their country from the drug lords and cartels” if they did not want the tariffs to take effect.

“People are frustrated…that immigration issues are being combined with trade issues.

Mexico has stepped up raids on migrant caravans, increased deportations and allowed immigrants to stay in the country while they wait for asylum hearings in the U.S.

But the number of migrants coming across the U.S.-Mexico border has continued to increase in recent months. Each day over the past three weeks, an average of 4,500 people have crossed the border illegally or “arrived at ports of entry without documents,” Homeland Security Secretary Kevin McAleenan said Thursday in an on-the-record call with reporters.

The uncertainty of the entire process is rattling companies that participate in cross-border trade.

“People are frustrated in not knowing what the long term goal is with this, that immigration issues are being combined with trade issues,” said Richard Owen, a vice president at the Produce Marketing Association, a trade organization for the produce industry.

What effects will this have on both economies?

The tariffs could be a blow to Mexico’s already lackluster economic growth if companies decide not to invest in Mexico or look for suppliers from other countries as a way to avoid the tariffs.

The effects on the United States’ $20 trillion economy, which has grown at a steady pace over the past year, would be less noticeable. But U.S. consumers are still likely to bear the brunt of the tariffs because many businesses importing the goods would pay the tax, and would pass the tax onto their customers in the form of higher prices. 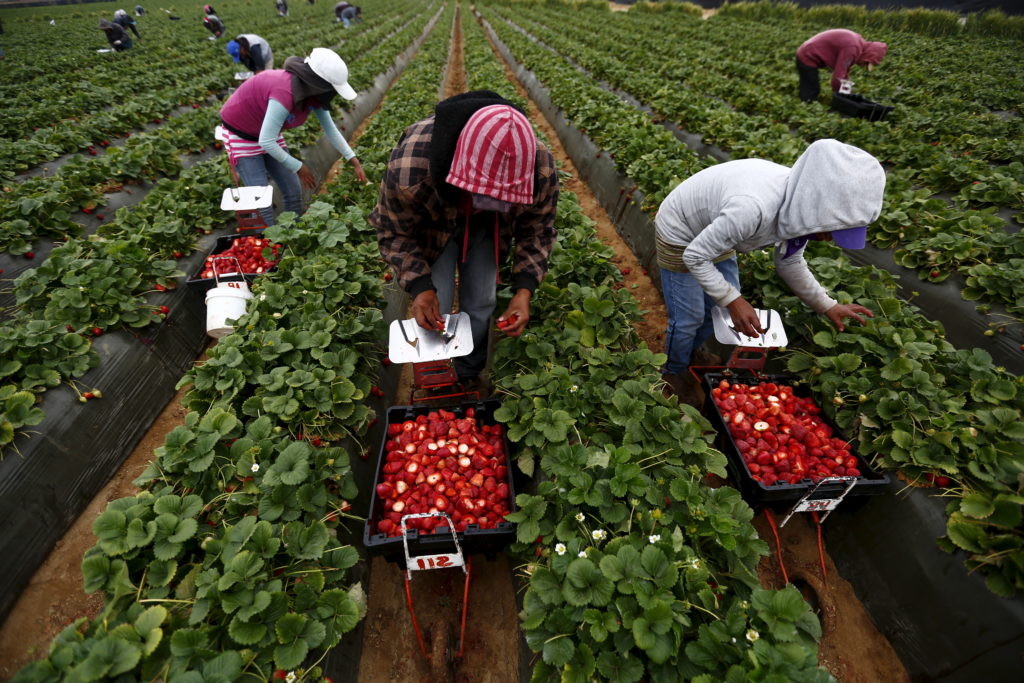 Mexico could also issue retaliatory tariffs on U.S. goods, as it did when the Trump administration imposed tariffs on steel and aluminum imports on Mexico and other countries last year.

The U.S. agricultural and automotive industries could be hit particularly hard by the tariffs because supply chains are heavily reliant on trade between Mexico and America. In 2018, vehicles accounted for the largest share of goods imported to the U.S. from Mexico, with a total worth of $93 billion. Agricultural imports totaled $26 billion.

In the auto industry in particular, many companies have facilities in both countries. The auto parts that are shipped across the border from one facility to another would be taxed even though the goods are not being sold to a separate company.

Is Trump misusing his authority?

The White House says Trump has the constitutional authority to impose tariffs under the International Emergency Economic Powers Act. Legal experts are divided, and some members of the president’s own political party are questioning Trump’s decision.

“Trade policy and border security are separate issues. This is a misuse of presidential tariff authority and counter to congressional intent,” Senate Finance Committee Chairman Chuck Grassley, R-Iowa, said in a statement.

The North American Free Trade Agreement, under which the U.S. and Mexico are currently operating, allows tariffs to be put in place for national security reasons.

But a recent World Trade Organization ruling suggests that Trump’s interpretation of “national security” may be too broad.

“It’s pretty clear this situation on the border would not fall under the WTO definition,” said Kimberly Elliott, a visiting fellow at the Center for Global Development who focuses on trade policy.

Still, even if the tariffs do violate trade deals, Mexico would have a difficult time holding the U.S. accountable, since remedies for trade violations typically take years to resolve.

What’s next for a U.S.-Mexico trade deal?

More immediately, the replacement for NAFTA, the U.S.-Canada-Mexico Agreement, still needs to be ratified by the three countries’ legislative bodies, and the tariffs could throw that process in doubt.

“I don’t see how the ratification process would go forward in Mexico or even in the U.S. or Canada while this drama plays out,” said Gary Hufbauer, a former deputy assistant secretary for international trade and investment policy at the U.S. Treasury Department, and a senior fellow at the Peterson Institute for International Economics. 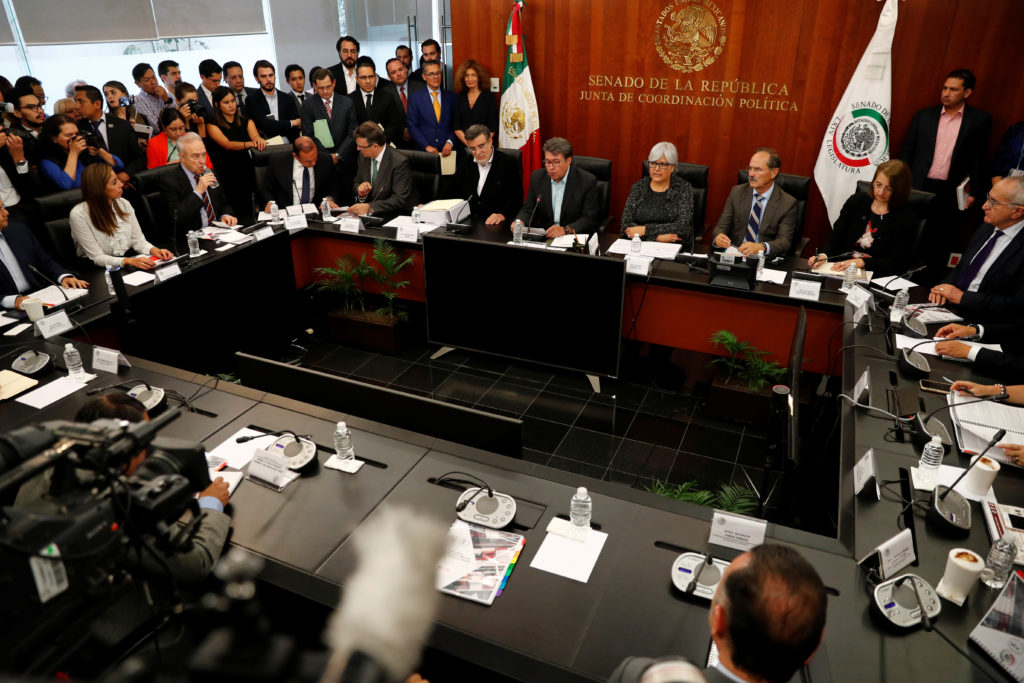 Senator Ricardo Monreal speaks between Julio Scherer, legal adviser of the Government of Mexico, Julio Scherer and Economy Minister Graciela Marquez as the United States-Mexico-Canada Agreement (USMCA) deal is delivered at the Senate building in Mexico City, Mexico May 30, 2019. Trump’s tariff threat has thrown the deal’s ratification into doubt. Photo by Carlos Jasso/Reuters

Before the tariffs were announced, there were signs this week that the new trade deal was moving closer to ratification.

On Thursday, the U.S. trade representative kicked off the process that would send the USCMA to Congress for approval. Last week, Mexico’s foreign minister also said there was a “good chance” Mexico’s legislature would ratify the deal.

In a phone call with reporters Thursday, Mick Mulvaney, the acting White House chief of staff, said the USMCA and the tariffs are “absolutely not linked.”

Mexico President Andrés Manuel López Obrador also downplayed the threat the tariffs pose to the new trade deal, saying he wants “to have a good relationship” with the U.S. On Friday, he dispatched his foreign affairs minister to Washington, D.C., in an attempt to find a solution.

Left: Trucks wait in the queue for border customs control to cross into U.S. at the World Trade Bridge in Nuevo Laredo, Mexico, on November 2, 2016. Mexico is the United States' largest trading partner. Photo by Daniel Becerril/Reuters