How your neighborhood coffee shop is brewing geniuses

Editor’s Note: For this week’s Making Sen$e segment, economics correspondent Paul Solman sat down with Eric Weiner to discuss his new book “The Geography of Genius” over coffee. Genius, says Weiner, is not just born, it’s created and cultivated, often in cities. And in 1900 Vienna, the coffee shop was imperative to cultivating the creativity necessary for genius.

So what geniuses came out of these Viennese coffee shops? Sigmund Freud, Gustav Klimt and Leon Trotsky. But before that, Vienna produced Beethoven, Mozart and Haydn. So what was it about Vienna? Weiner explains below. For more on the topic, watch this week’s Making Sen$e segment, which airs every Thursday on the PBS NewsHour. The following text has been edited and condensed for clarity and length.

Paul Solman: So what got you interested in genius — are you a particularly smart guy?

Eric Weiner: No, I’m not. Ask my wife. I’m interested in genius the way a hungry man is interested in Philadelphia cheesesteaks. I want something. I want a piece of it. And I’ve always been a big believer in the power of place. I believe that where we are affects who we are when it comes to happiness, spirituality, economics and creative genius. We often ask, “What is genius? Who is a genius?” We don’t often ask, “Where is genius?”

Paul Solman: And therefore, “The Geography of Genius.”

Eric Weiner: Exactly. Genius is not only a what or a who, it is a where. It is grounded in a place every single time. You look around the world at geniuses, and they don’t appear randomly, they appear in genius clusters. Athens in 50 BC, Florence 1500, Silicon Valley today. This is not a coincidence. Something was in the water back then, and what I want to know is: Can we bottle it?

Paul Solman: So what was it about Vienna?

Eric Weiner: The coffee shop played a big role in Vienna of 1900. Rents were sky high, housing was difficult to come by, your apartment probably wasn’t heated, and so you went to the coffee shop. You went to the coffee shop because it was warm, because it was great Viennese coffee, and you went for the conversation and the company. You also went for the news of the day. They had, and they still do, newspapers on display, for you to read. That’s where people found out what was going on around the world, and it’s where they exchanged ideas. They had conversations, and every topic was fair game in a Viennese coffeehouse. 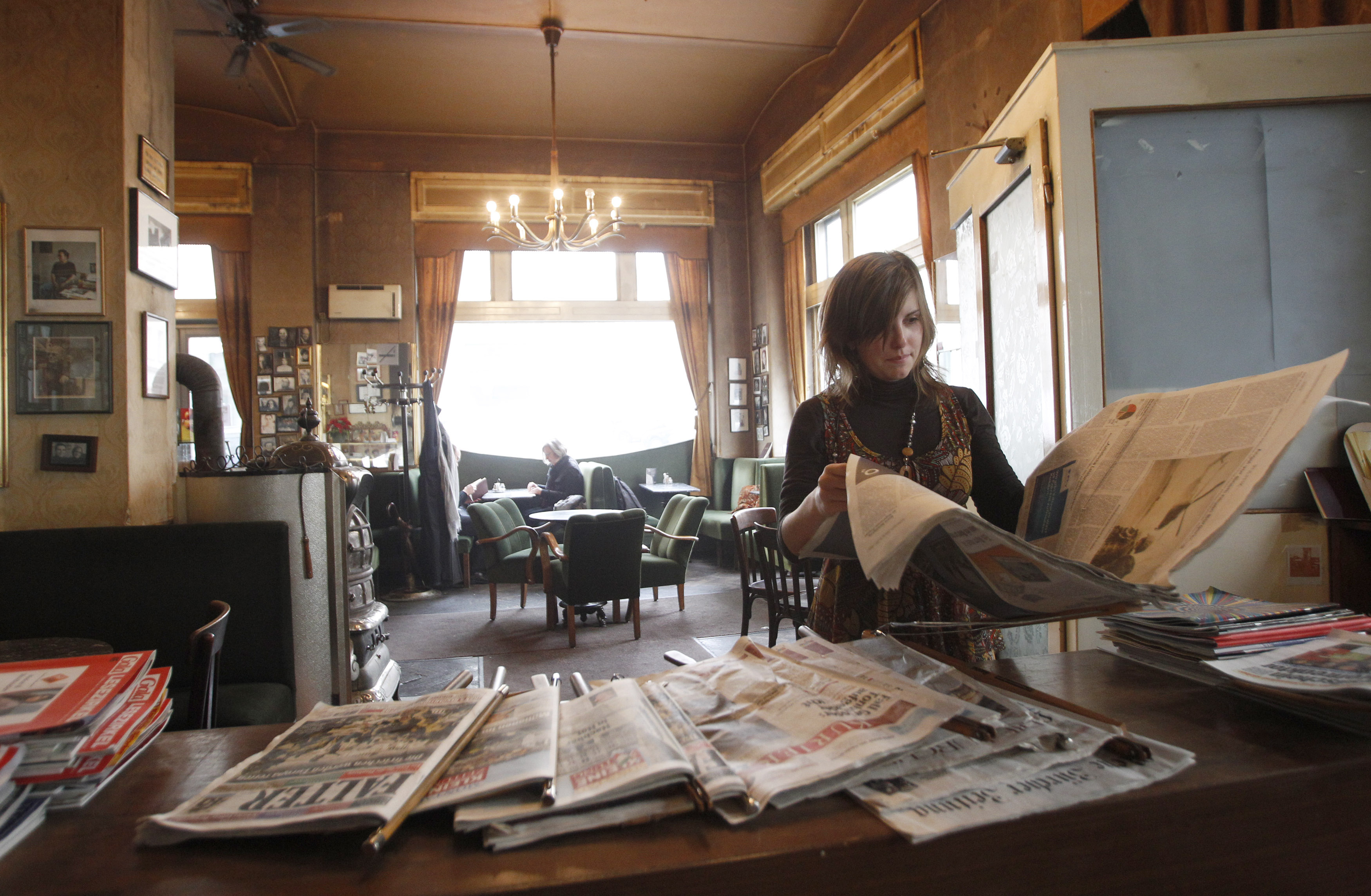 In 1900 Vienna, coffeehouses had newspapers on display for customers to read, and they still do today. “That’s where people found out what was going on around the world, and it’s where they exchanged ideas,” says Eric Weiner. Photo by Lisi Niesner/Reuters

Eric Weiner:  No. I would love to think there is a direct relationship between coffee and genius, but they’ve done studies, and if anything, caffeine probably makes you a little less creative. When you drink coffee, you become very focused, and in fact, the key to creative genius is to be defocused. Psychologists call it “defocused attention,” where you broaden your horizons, let your mind float and drift a bit. Coffee keeps us sharp and alert. It’s great if you’re driving at 3 o’clock in the morning. It’s not so great if you’re trying to come up with the next violin concerto.

Paul Solman: So coffee isn’t good for the day dreaming of genius, but it’s good for focusing on interaction.

Paul Solman: I don’t think they were going to invite Hitler over to their table, really.

Eric Weiner: Probably not, but they were all in Vienna at the same time. You had world’s colliding and it’s colliding in the coffeehouse.

Paul Solman: So we should have more coffeehouses? 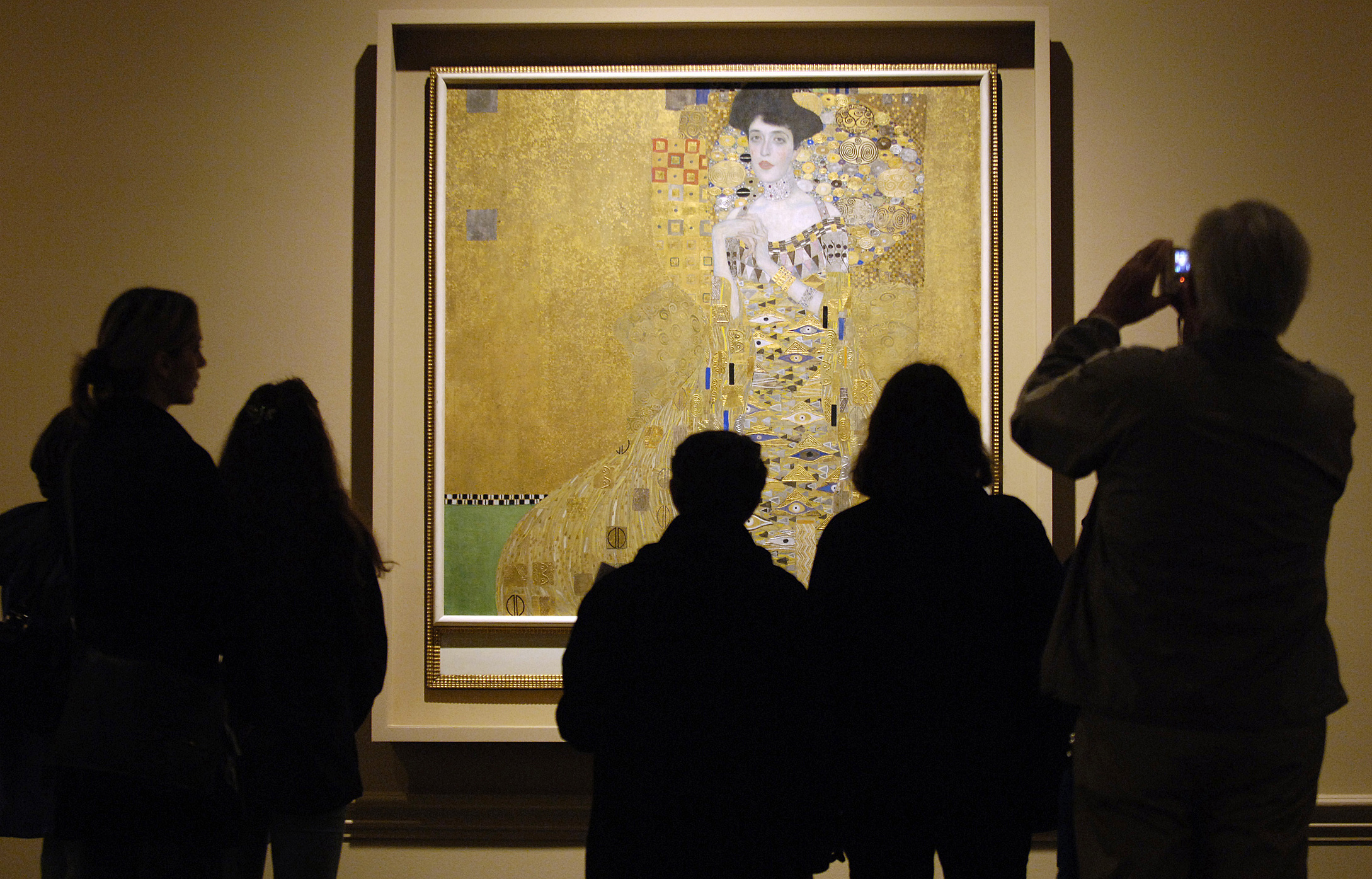 Here’s a product of some of that genius. Museum visitors study Gustav Klimt’s 1907 painting “Adele Bloch-Bauer I.” Eric Weiner explains that Klimt, like his fellow geniuses of the day, found creativity in coffee shops across Vienna. Photo by Chris Pizzello/Reuters

Eric Weiner: Yes! I think we should have more coffeehouses, more cafes, more “third places.” More places where people can get together that’s not work, not home, and where they can interact with people who are different from them.

Paul Solman: But we have a Starbucks on every corner, and on some street corners, we have two of them.

Eric Weiner: Well, have you heard of the Starbucks effect? So right now what do you hear?

Paul Solman: I hear a buzz, I hear clinking.

Eric Weiner: You hear a buzz, a background noise which I’m willing to bet is near 70 decibels. They’ve done studies. What is the ideal audio atmosphere for creativity and it turns out it is not complete silence, and it is not a very loud atmosphere, it’s something just like this — about 70 decibels. The sort of sound level that you would find in a Starbucks or another coffee shop because it defocuses your attention. Have you ever found that when you’re stuck on something creatively, you can’t solve a problem, you go to a coffee shop? People don’t go to Starbucks for the coffee — of that I’m pretty sure — they go for the atmosphere, they go for the 70 decibels, they go for the Starbucks effect.

Paul Solman: They go for the Wi-Fi.

Eric Weiner: They go for the Wi-Fi. Again, that’s like the coffeehouses of 1900 Vienna. People went for the newspapers that they could read when they got coffee, they went to interact and they went to get out of their own heads. The creative act always requires a stepping back. It’s called the incubation period. The incubation period — one of the four phases of creativity — is when you’re not consciously thinking of a problem, and you’re letting it marinate. So this is why you hear time and again, people saying they had that “Eureka” moment in the bath, like Archimedes, or in the shower, or while going for a walk or in a coffeehouse.

Paul Solman:  But in your book you’ve got an earlier Vienna — the Vienna of Mozart and Beethoven — so what explains that period?

Eric Weiner: Music was literally in the air at the time, the Vienna of 1780. Everybody played music, classical music. There were in fact so many musicians that in apartment buildings people had to come up with a schedule — you practice at 5 p.m., I’ll practice at 6 p.m. That way the music didn’t collide with one another. Someone like Mozart moves from Salzburg to Vienna, where all of the sudden he finds this musical city that is not only asking for music, it’s demanding music of him. And my theory is that a Mozart symphony is very much like a Pixar movie — in the sense that Pixar movies are hugely successful because they operate on several levels at the same time. They appeal to the kids and they appeal to their parents. Likewise, and Mozart says this in one of his letters, I’m writing for two audiences. I’m writing for the connoisseurs who will get it, and I’m writing for the “average man” who will still appreciate it. So you had all these levels of audience going on in Vienna, and you have people like Mozart, Beethoven and Haydn fulfilling a demand in a way. Genius is part of this ecology of creativity, and the audience was a big component of that.

Paul Solman:  So you mean that the community is a virtuous circle that then breeds geniuses?

Eric Weiner: It’s a magnet. These places are like magnets; they attract people from far and wide. Haydn, Beethoven, Mozart, none of them were born in Vienna. They all moved there. It became a magnet, but what made it magnetized in the first place? There has to be a seed there. In the case of Vienna of about 1780, it was this deep-seated love of music.

But you need a seed. You need some reason why Beethoven, Mozart and Haydn in the 18th century all flocked to Vienna. What was it about Vienna? They must have known on some level that that is where they would flourish. It’s what biologists call “selective migration.” When a species migrates somewhere, because it senses that it will thrive there. And these geniuses sensed that Vienna was the place to be, because the music was literally in the air. Everybody was a musician, the emperor was a musician, and the average street sweeper was a musician who played the violin or the piano and who went to concerts — some of whom were free in the park — and who were very demanding of their composers. Don’t forget that Mozart worked on commission. He almost always would write something if he knew exactly who was paying for it and where it would be performed. So you can’t really separate the creation of genius from the appreciation of it. It’s almost like the city of Vienna was a co-genius that worked alongside Mozart and Beethoven and the rest.

Left: In 1900 Vienna, the coffee shop was the place to share ideas and cultivate the creativity necessary for genius. Photo by Lisi Niesner/Reuters