Is the rise in U.S. corporate debt cause for concern?

Editor’s note: This analysis is being published in collaboration with EconoFact, a nonpartisan economic publication.

U.S. regulators need to keep an eye on the growing U.S. corporate debt, the top official at the Securities and Exchange Commission warned Monday.

Speaking in New York, SEC chairman Jay Clayton said the U.S. corporate debt of almost $10 trillion–which equates to half of the nation’s annual GDP, “should attract our attention.”

Corporate debt has been growing at a rapid pace since the recovery from the Great Recession, and the total value of nonfinancial corporate debt in the United States now stands at, or near, all-time highs. This has been the source of some concern since excessive debt can lead companies to face financial distress, and this distress could spread to the larger economy.

People are especially sensitive to this because of the role debt played in past crises, such as the financial crisis that peaked in the autumn of 2008. There is also concern because loans account for a large proportion of corporate debt. 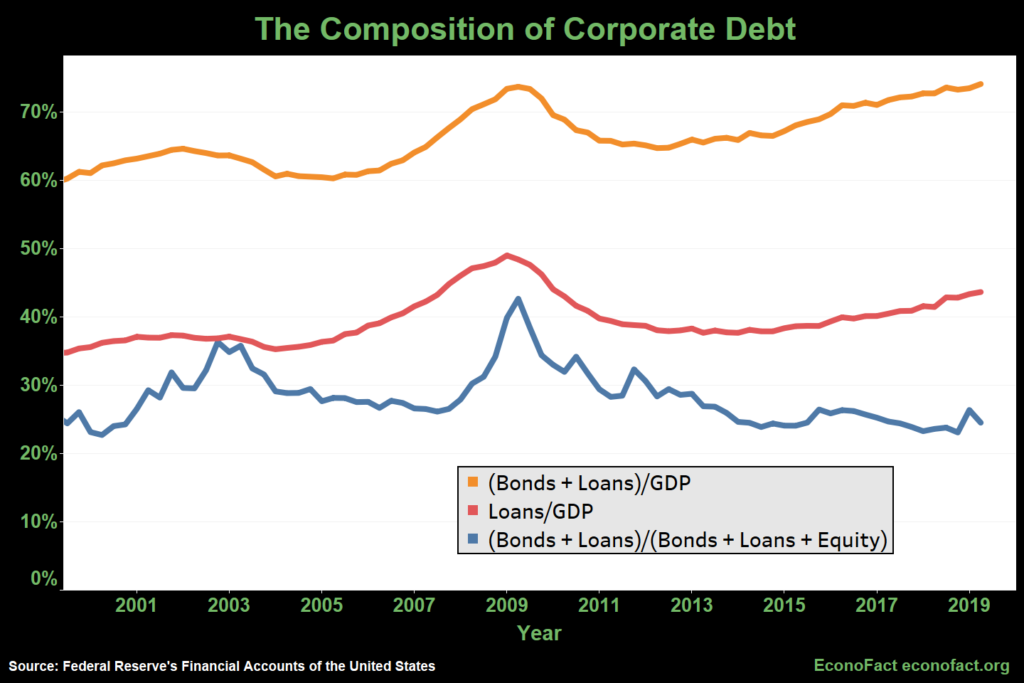 Unlike bonds, whose terms are relatively transparent and therefore have risks that can be more readily gauged, loans are private contracts between two parties and their terms and risks may be less well understood. Should the growth of debt, or its composition, be a source of concern?

It is important to pay attention not just to the amount of debt, but also different facets of its composition.

The amount of corporate debt has been growing since the recovery from the Great Recession, but this aggregate growth in the amount of debt appears mostly consistent with the robust growth in corporate profits.

Debt as a share of the total firm financing mix is much lower today than it was during the 1980s and early 1990s. The mix of debt tilts in the direction of loans versus publicly-traded bonds, and because well-crafted covenants are an important tool for protecting against loss, it is important to continue to pay attention to changes in covenant quality over time.

Finally, rising interest rates could quickly erode the profitability of firms that have borrowed at floating rates or using short-term debt.

Daniel Bergstresser is a an associate professor of finance at Brandeis University.