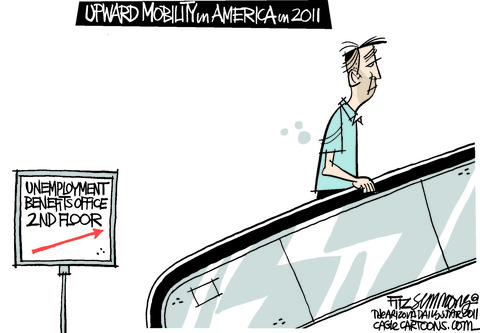 It’s a welcome moment when we TV reporters get mail, since we usually talk to an invisible, mute audience. It’s more gratifying still when the feedback reaches avalanche proportions. And I’m especially glad to respond to this latest landslide, hostile though most of it has been, since the issue is one to which I attach the greatest importance, especially as our economy tries to slog ahead: inequality in America.

The triggering event was an interview in defense of inequality with noted conservative and libertarian law professor Richard Epstein which aired last Thursday night. One consistent complaint from viewers: an Epstein misquote.

“I’m going to quote Abraham Lincoln,” said Epstein during the interview, “because I like to do that — which is, he said, quite rightly, that you do not make the poor rich by making the rich poor.”

Actually, the quote turns out to be “You cannot help the poor by destroying the rich” and was coined, it seems, by a conservative Presbyterian minister, William John Henry Boetcker (1873-1962), whose “The Ten Cannots,” first published in 1916, included this one (it seems to have been “Cannot” No. 5). Republished as a leaflet by a conservative organization in 1942 with Lincoln quotes on the reverse side, the quote has often been misattributed to the President, who died before Boetcker was even born. Most famously, it was used by a later president, Ronald Reagan, at the 1992 Republican convention, inveighing against his misguided Democratic opponents:

“What they truly don’t understand is the principle so eloquently stated by Abraham Lincoln: ‘You cannot strengthen the weak by weakening the strong (Boetcker’s Cannot No. 2). You cannot help the wage-earner by pulling down the wage-payer (No. 4). You cannot help the poor by destroying the rich. You cannot help men permanently by doing for them what they could and should do for themselves'” (No. 10). The New York Times quickly debunked the false attribution.

Now of course, I knew none of the back story when Epstein too misquoted Lincoln. I had committed to memory the first chunk of the Gettysburg Address and Lincoln’s bit about fooling people all the time and that’s about it. We don’t usually vet quotations when some interviewee uses them, although from now on we will.

In fact, while writing this, I thought I’d better look up the fooling people quote, to make sure that too was not a misattribution. And lo and behold, from the Yale Book of Quotations:

(Amazingly, the line seems to have come first from Denis Diderot in his Encyclopedia of 1754. See the first Diderot quote on p. 204.)

We’re sorry, of course, that we let Epstein make his mistake. We hate making mistakes – or repeating them. We corrected the quote online as soon as we heard from viewers. But when I reread the quote, who would disagree with it? Who thinks you help the poor by destroying the rich? (Boetcker and Reagan’s version) Or make the poor rich by making the rich poor? (Epstein’s.) Maybe Stalin, or Steve the Talking Parrot, but I’m sure Lincoln didn’t believe this, even if he never said it. And neither do the most passionate champions of greater economic equality in America. The better question might be who it is Professor Epstein thinks he’s refuting.

In other words, the misquote issue seems more like a ‘gaffe gotcha’ than a substantive grievance. Rather, it’s the fact of the Epstein interview itself that riled so many. And it’s with regard to that substance that a review of our inequality coverage over the years might be, I hope, instructive.

Longtime viewers of the NewsHour may recall how assiduously the program has covered the problem of economic inequality. And though reviewing that coverage at length may seem defensive, it reminds me, at least, of the road that’s led to “The Other 99%” movement and the volatile nature of discourse in America these days.

I began as full-time business and economics correspondent of The MacNeil/Lehrer NewsHour in the spring of 1987. That fall, I produced a story dubbed “Upstairs, Downstairs,” suggesting that a slow-rising Consumer Price Index might be hiding a basic and disturbing truth about the American economy.

“There are two very different economic worlds in America today,” the transcript reads. “Two worlds that are moving farther and farther apart. It is this crucial fact of modern economic life that the Consumer Price Index tends to obscure…. what the Consumer Price Index can’t reveal is the fact that owning your own home has become a great economic divide. Between those that live downstairs and those that live upstairs.”

A year later, during the George H.W. Bush – Dukakis campaign, we did a story featuring the late economist Bennett Harrison’s formulation of an “hourglass economy.” Again, from the transcript:

“Traditional economies right up through the industrial revolution were essentially triangles and distributed wealth unfairly, a very broad base of low paid peasants and similarly exploited workers supporting the wealthier members of society above them. By contrast, the American economy of the 19th and 20th centuries was supposed to be a great historical advance, more nearly a diamond shape. Equal economic opportunity was delivering more and more citizens to the bulging middle class. But now we talk of an hourglass economy, losing middle class, middle income jobs, while adding low paying jobs below and high paying jobs above…. Can either Michael Dukakis or George Bush reverse the trend toward an hourglass economy?”

By 1992, we had begun pointing out the trend toward two-income families – women working in order to maintain otherwise deteriorating family incomes, deteriorating because of ebbing pay for men at the bottom. The causes of the ebb were already clear: globalization and technology, the weakening of unions and perhaps even demographics: baby boomers competing for jobs.

One conservative publication called our analysis of a real income decline during the Reagan years “silly,” but quoted us correctly:

“Using the wages of Archie Bunker’s TV family as an example, Solman traced the drop’s origin to the ’70s, but argued things really fell apart under Reagan. ‘For the well-dressed and well-heeled, the data are pretty clear. In general the higher their income when the decade began, the greater their share of the economic gains of the 1980s. For awhile, many in the bottom 60 percent or so believed that the wealth would trickle down to them. But…it became harder and harder for folks like the Bunkers to maintain their real income.’ Solman ignored the fact that median family income increased every year from 1982 to 1989.” 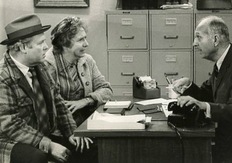 The criticism ignored what we had painstakingly researched and reported: that family income did increase – because of second incomes from women like Edith Bunker.

By the early ’90s, political resistance to the economic inequality trend persisted, as did the data documenting it. The NewsHour, committed as ever to reporting honestly and evenhandedly, never wavered in its support for the story and an analysis of what might be driving the phenomenon.

One explanation was MIT economist Frank Levy’s in a story of ours in 1995: “for a long time we wanted the economy to become more efficient, and that’s happening. And in the last several years we’ve wanted all this to take place with less government spending, which means a smaller safety net, and when you put those two things together, the economy becoming more efficient and a smaller safety net, you get more inequality, and you get a very wild ride.” (We shot the story next to a roller coaster for reasons of mnemonics and amusement.)

At this point in the chronology, two things happened:

And this year, we’ve paid special attention to the issue with six stories on inequality:

In Ohio, How 2 Counties’ Economic Paths Diverged Over 30 Years

Many Americans Feel ‘Stuck in a Rut’ as Economy Improves, But Inequality Grows

Land of the Free, Home of the Poor (our most-watched economics story ever)

Inequality Hurts: The Unhealthy Side Effects of Economic Disparity

Does U.S. Economic Inequality Have a Good Side?

These last two, as their titles suggest, were different. In the “Social Safety Net” story, economist Robert Lerman, a longtime expert on inequality metrics, critiqued our way of measuring wealth inequality. After having considered his objections to the data we used in “Land of the Free,” we thought his an argument worth airing, and still do. In the most recent piece, we had reached out to a proponent of economic equality to make the case on its behalf, a case many Americans believe. Thus the interview with Richard Epstein, including the faux Lincoln quote.

After that, the deluge. Many viewers blasted us for featuring Epstein at all (“what rock did you find him under” was a not untypical response) and the liberal group FAIR – Fairness and Accuracy in Media, which also blasted the Lerman interview — sent out an “alert” for members to act upon:

“Tell the PBS NewsHour to issue a correction explaining that guest Richard Epstein invoked a false Abraham Lincoln quote to support his pro-inequality argument. And ask the show why it is so eager to feature one-on-one interviews with guests who downplay–if not outright celebrate–economic inequality.”

Where the emails had rained in before, they now poured.

Why the wrath? And why have I gone to such lengths to chronicle our inequality coverage, if not just to defend us?

Second question first. I want as many people as possible to read and watch our work and recommend it to others. I think we’ve told the inequality story carefully, comprehensively and provocatively from early in the trend and that the present state of the American economy vividly demonstrates the accuracy of our reporting. I also think Robert Lerman and Richard Epstein were clear enough and straightforward enough for any thinking person to evaluate what they said.

As to the wrath, I understand that no one in the world remembers our work as well as I do. People are reacting to what they’ve just seen and heard – Lerman or Epstein — not contextualizing those interviews in terms of dramatically dissimilar stories about Archie and Edith Bunker from a generation – or even a few weeks — before.

But what I take to be significant is the sense of outrage — that economic inequality can by this point be in any way minimized or justified by anyone. If there’s a driving theme to the “Occupy” movement, as we suggested in our coverage of the New York branch, it’s the inequality divide, as exemplified by the hand-painted sign, quoting George Carlin: “The American Dream – You Have to Be Asleep to Believe It.” What our coverage indicates is just how long this attitude has been building, and why. 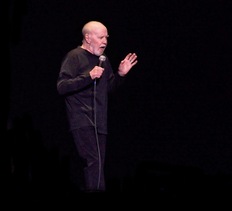 As to our critic from 1992 and others who have denied the trend, is there a legitimate argument that inequality is not happening? I put that question to Harvard economist Richard Freeman a few months ago, who answered:

“I suppose if there is truly a skeptic that must be somebody who’s got their head deep in the sand or is blind to facts. In the economics fraternity, I would say people both right and left are seeking ways to explain why this happened.”

Finally, as to the Epstein interview itself, as to all our inequality work over the years, I think I can safely say that the NewsHour house, undivided against itself, stands.

Photos, top to bottom: Undated photo of William John Henry Boetcker. Photographer unknown. Via a public domain license. Carroll O’Connor and Jean Stapleton as Archie and Edith Bunker in a 1973 episode trying to convince the government that Archie isn’t dead. Photo from CBS Television under a public domain copyright via Wikimedia Commons. George Carlin in Trenton, New Jersey in 2008. Photo by Point-Shoot-Edit via a Creative Commons license in Wikimedia Commons.