“It stands before you like a beacon. This is Jersey City like you’ve never seen it before. This is Trump Bay Street.”

Well, the view is from Trump Bay Street (to correct the building’s website slightly, at the top of which this photo appears), not the building itself. But proximity to Manhattan is the trump card, if you will, for the residential tower: a model of luxury, and also a model of a loophole U.S. developers use in a controversial citizenship-for-cash program. They use the loophole to obtain foreign financing for projects like this one, developed by Donald Trump’s son-in-law, Jared Kushner. Let’s let the website continue:

“The amenity spaces feature furnishings by the luxury brand RH. From the pool to the chef’s table to the observation deck on the 52nd floor, all areas have been curated to elevate the residential experience.”

What the 52-story residential tower also features is the secret of how American real estate developers can (and do) get inexpensive financing for luxury projects in prime locations by selling U.S. visas to foreign investors at half price.

The red dot is the site of Trump Bay Street. The blue tower just across the water is the World Trade Center. Seventeen minutes by subway. 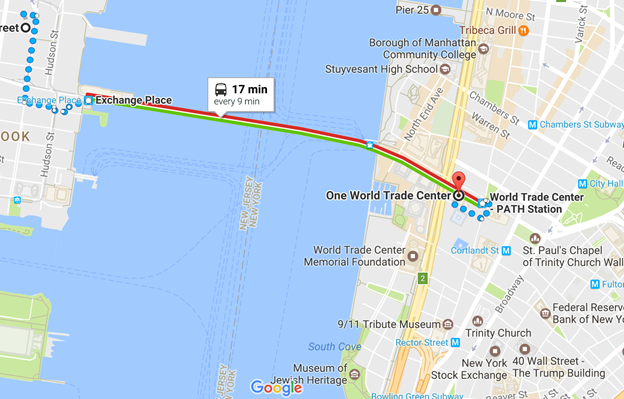 It was Kushner Companies, the real estate firm of Donald Trump’s son-in-law, Jared Kushner, that put up Trump Bay Street. (His father-in-law licensed his name to the development.) The tower obviously cost a bundle to build. What we explain on June 15’s PBS NewsHour in our weekly Thursday Making Sen$e story is the loophole in the EB-5 visa program used by the developer.

As we’ve reported several times over the past two years, any American firm can apply for EB-5 visas for foreign investors, from luxury projects in Manhattan and Brooklyn, as we reported in 2015, to a ski-resort-plus-biotech-center in the most remote reaches of northern Vermont, which we covered several times over the course of a year, as the magnitude of the fraud there — the largest in EB-5 history — became apparent.

But in all EB-5 projects, most of them legit, the investors get a green card assuring permanent U.S. residency (on the way to formal citizenship) for themselves and all family members under age 21 in exchange for a $1 million dollar investment, so long as the money creates 10 U.S. jobs. There’s an added sweetener for areas that badly need jobs. If the jobs are created in a rural area, or in a U.S. city “targeted employment area” with an unemployment rate 1.5 times the national unemployment average, then the visa price is cut in half: just $500,000 to create 10 jobs gets you a ticket to U.S. citizenship. (By the way, the investors are also promised a return on their investment by the managers of it, but that’s like any investment: maybe it pays off financially; maybe it doesn’t.)

Now take a look at this map of Jersey city, created by journalist Norman Oder for his article in City & State New York. 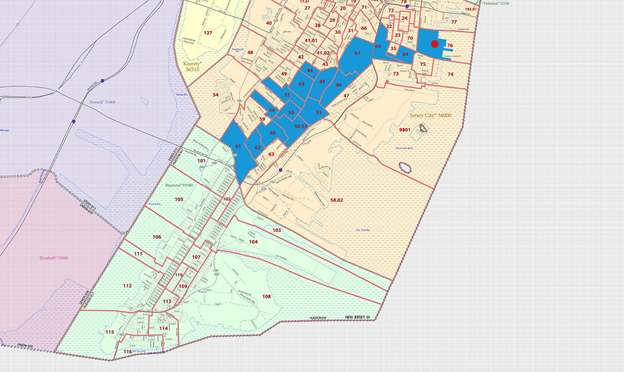 The red-outlined boxes are Jersey City’s neighborhoods — its “census tracts.” And that blue jigsaw puzzle piece covering 16 of them is what’s called the “targeted employment area” created by Kushner Companies to get the discounted foreign financing for Trump Bay Street, the red dot closest to the water.

Why such a tortuous new area? Because Trump Bay Street was built in a booming neighborhood. Its home census tract was clearly not a “targeted employment area.” In fact, when the developer applied for permission to solicit foreign EB-5 investors, the unemployment rate in this census tract was a mere 3.1 percent, more than 1.5 times below the national unemployment rate, not 1.5 times above it. So Kushner Companies drew up a “targeted employment area” of 15 additional neighborhoods — “census tracts” that extended south into the very poorest and most dangerous parts of Jersey City. 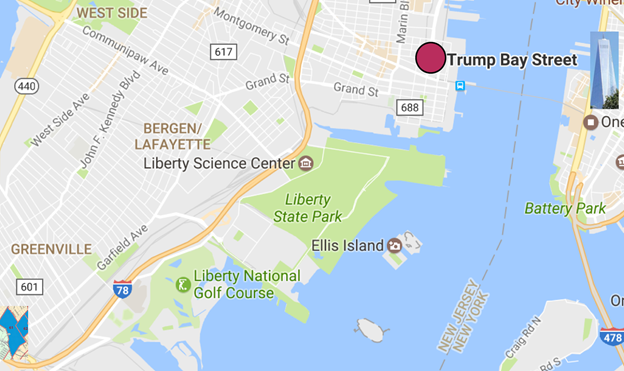 The tip of the blue puzzle piece at the lower left marks the end of the gerrymandered TEA: the “targeted employment area.” It’s past Ellis Island and even the Statue of Liberty, miles from Trump Bay Street, from which lower Manhattan is one subway stop away. But all the poor census tracts in between, along Grand Street and Garfield Avenue, had to be added in order to hike reach a high enough unemployment rate. And indeed, the area wound up with a TEA in which the average unemployment rate was fully 9.8 percent.

The question is: How many jobs has Trump Bay Street created in those job-starved neighborhoods? We try to provide something of an answer on tonight’s PBS NewsHour, as well as the story of the latest Kushner project in Jersey City.