“We titled the book ‘All the Devils are Here’,” said Joe Nocera’s co-author, Bethany McLean, “because in the wake of the crisis there has been this search for a simplistic answer. Ah! Fannie and Freddie, they must be the villains! Ah! The big banks, they are the ones who caused this! Oh, look at Angelo Mozillo, the former CEO of Countrywide: isn’t this all his fault? Our point is that this was multifaceted. The story involves an entire cast of characters stretching back over a couple of decades.”

Interviewing McLean and Nocera at Wall Street’s Museum of American Finance, we were reminded that the history of diabolical finance goes back a lot further than that. So we asked Nocera and the Museum’s chairman, New York University economist and financial historian Richard Sylla, for their favorite devils of the past. We profile the Bottom Ten — America’s Rich and Infamous — in the following slide show. 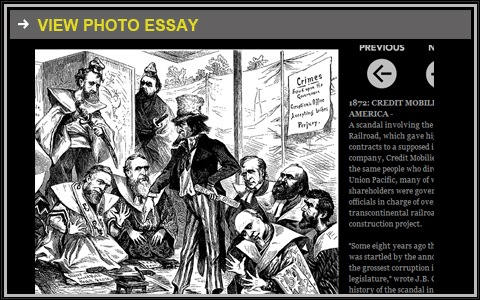 To Richard Sylla, the scams of the past decade represent just another page in the long book of American financial scandals.

“We’re repeating history. 1930 was the last time a major crisis hurt the economy,” Sylla said. “Back then, every 10 or 20 years a major financial crisis caused an economic slowdown. They were almost expecting it so they were a bit more careful, perhaps.”

And perhaps some malefactors of great wealth will be more careful once again.

“Madoff’s spending his last 250 years of life in jail,” Sylla said. “The hope is other people look at that and say, ‘I don’t want that to be me.'”

In the wake of an economic crisis, scandals are bound to be unearthed. In response come regulation and penalties to try to prevent the fire next time. But the current distrust of government and regulation has both Nocera and McLean worried.

“One of the things I worry about going forward,” said Nocera, “is that we are going to spend the next year having the proposed [Obama] regulations clipped at, shorn down, pared down to nothingness, so we really will be right back where we were before all this started.”

The more the system of incentives is screwed up, the more regulation you need. So if you have a world where banks genuinely can fail, where financial institutions and the people at those financial institutions bear responsibility for the loans they make, and the products they sell, well you know what? You need to less regulation. The more you don’t live in that world, the more firms are too big to fail, the more firms and individuals at them can duck responsibility for the products they sell by moving the responsibility off their books to somebody else, well then the more regulation you need.

“So,” we asked the authors, “are you both looking at the fire next time?”

“I hope I’m not looking at the fire next time,” said Nocera, “but I think we may well be.”

Photos courtesy of the Museum of American Finance, creative commons and the public domain.