Late last week the makers of the 2009 rap video “‘Fear the Boom and Bust’ a Hayek vs. Keynes Rap Anthem” came out with a follow-up: “Fight of the Century: Keynes vs. Hayek Round Two”.

John Maynard Keynes died in 1946 and became the prophet of government economic intervention, from the New Deal through the Kennedy tax cuts of the early 1960s. Friedrich Hayek lived through those decades in relative obscurity, only to see his star rise after the stagflation of the 1970s. He was a hero to free marketers Margaret Thatcher and Ronald Reagan, among others.

These days, the deceased dons represent the antipodes of global macro-economics. In version 1.0, Keynes rapped: “I want to steer markets.” Shouts Hayek: “I want them set free.”

Back in ’09, we asked two live economists to comment on the Keynes-Hayek stand-off: George Mason University’s Russ Roberts, co-author of the rap video, a Hayek devotee, as the name of his blog, Cafe Hayek, would strongly suggest, and Lord Robert Skidelsky, famous as Keynes’ biographer. They interpreted the respective heroes for us in a story which also featured the making of the first rap video.

We decided to mount our own rematch. On Friday, we published Russ Roberts channeling Hayek. Today, we cede the floor to Keynes.

With Lord Skidelsky holed up in rural England, desperately finishing a booking, we turn to an economic historian who, like Keynes, both studied and taught at Cambridge University. Adam Tooze is author of the magisterial work on Nazi Germany, “Wages of Destruction.” He has for two years channeled Keynes at a class I teach at Yale, where he’s now on the faculty, and seemed an ideal choice. Keynes vs. Hayek II hadn’t yet been released when we put the following questions to him.

Paul Solman: What did Keynes believe about the economic role of government? 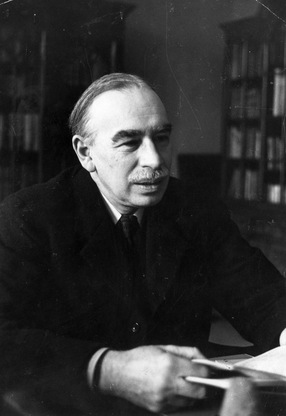 Adam Tooze: Keynes is widely misunderstood as an advocate of “big government”. But enormous modern welfare states or military-industrial complexes are driven by large scale historical forces, not Keynesian theory. A better way to understand Keynes is as a man steeped in the culture of upper class Victorian and Edwardian Britain. Looking back on the industrial revolution and the great wave of globalization since the 1850s he knew only too well what good free trade and conservative economic policy could do under the right conditions. The question was how many of the lessons preached by 19th century liberals were still relevant in the early twentieth century in the wake of two, catastrophic global wars. Keynes’s theoretical analysis suggested to him that markets could certainly malfunction and under modern circumstances those malfunctions could be catastrophic. So he became an advocate first of an active role for monetary policy of the kind that we take for granted today but was unknown until the 1920s. When that failed, in the 1930s he became the leading advocate of fiscal policy intervention as well. Both of those in turn had to be framed within an intelligent redesign of the international currency system, led of course by governments. He did not advocate big government but intelligent and coordinated action by governments.

Paul Solman: What would Keynes do about the US economy if he were in government today?

Adam Tooze: The emergency measures taken in the face of the crisis are certainly the kind of thing that one would expect Keynes to have advocated, the monetary measures as much as the fiscal. But, I am even more certain that Keynes would have been horrified by the persistent lack of strategic leadership from the US with regard to the global implications of the “twin deficits” i.e. in the Federal budget and America’s trade account with the rest of the world. It is in the imperative long term interests of the US to enter into immediate discussions with China and the EU over a new common strategy for the intelligent management of global currencies, finance and trade. A new Bretton Woods is neither appropriate nor applicable. However, we must ask why it is that China has chosen to reinvent a mini Bretton Woods for itself by pegging its currency to the dollar. China’s willingness to enter into constructive discussions about a possible role in managing the Euro crisis is even more striking. I am sure he would have regarded it as a disaster that the authoritarian Chinese regime appears to have more strategic vision than the richest and mightiest democracies the world has ever seen.

Paul Solman: What would Lord Keynes have done about current deficits?

Adam Tooze: The huge deficits that began to pile up under the previous administration should certainly be a matter for concern. And American democracy needs to demonstrate that it is capable of action on fiscal policy. It needs to be able to discuss taxes as well as spending. But the debt to GDP ratio of the US is not particularly alarming by international standards. There is little cause for concern about sovereign debt markets. The priority has to be to secure overall global growth and to bring about an orderly adjustment of the global macroeconomic imbalances.

Paul Solman: Would Keynes vote to raise the debt ceiling?

Adam Tooze: Obviously as a short term necessity. In the longer term though the absolute figures are enormous. People underestimate the size of GDP and its long-run dynamic. Both the numerator and denominator are huge. It is a fallacy to view a society’s debt like that of an individual. In the long-run America is not dead. The crucial thing we should be worried about is who is buying the debt and what that implies for the balance of the world economy. Debt owed by the Federal government to American citizens is a matter of redistribution. Federal debt held by foreigners points to large-scale imbalances that we should address as a matter of policy. It may be desirable for such borrowing from abroad to take place, but it needs to be addressed as a matter of policy. On the face of it, it is not obvious why the richest country on earth should be in a position where it borrows from abroad. A trade deficit of a certain scale may be very desirable from the point of view of promoting global growth. People need to sell their goods to American markets. But it ought to be off-set by strong surpluses on the invisible account and capital account enabling the richest country on earth to boost global growth by a net export of capital. Again, I think Keynes’ bench mark would be the growth enhancing international posture of Britain before World War I, in the golden years of his youth.

Paul Solman: Is the current political debate, especially around the budget, a reflection of Hayek on the right versus Keynes on the left?

Adam Tooze: The current political struggles in the US would make Keynes despair of the state of public education and civilized political discourse. Keynes would not attribute the debate either to himself or any colleague he held in high esteem. But politics aside, Keynes advocated fiscal policy intervention not as a long-term structural change to the balance of the economy, but as a short term stimulus to an economy that had flat-lined. He was not concerned with the long-term development of state budgets or with issues of societal distribution. To provoke his opponents and to make his intellectual point, he would even insist that he was indifferent as to what the money was spent on. He also believed that a small amount of government spending could have a dramatic effect by way of the famous “multiplier effect”. Even the most optimistic analysts today believe in smaller multiplier effects from public spending than Keynes proposed. And insofar as there is a meaningful debate about the current budget controversy, it seems to be about longer term priorities with regard to infrastructure, fundamental elements of welfare, and public debt, not the short-term question of how we reduce the current unemployment level. For better or worse I don’t see this as a Keynesian argument.

This entry is cross-posted with Paul Solman’s Making Sense page.