‘Make In India’ promises manufacturing jobs for millions. Here’s why it won’t work

Indian Prime Minister Narendra Modi is spending this week promoting his “Make In India” campaign, an ambitious program designed to turn the subcontinent into a “global manufacturing hub.” Modi’s vision is grand: He hopes to create 100 million manufacturing jobs in the next six years and spur the development of a middle class that will power the Indian economy for years to come.

Many are bullish on this vision. I’m not.

I worry that productivity gains arising from automation have made manufacturing-driven development an antiquated approach. It may have worked for China, but India is too late to reap the benefits of this strategy. Technology has progressed so rapidly over the past few decades that only very cheap wages can compete with capital equipment. And to be competitive with the rise of robotics, those wages must stay low — exactly the opposite of what India’s economy needs.

Focusing on what worked in China is a recipe for disappointment.

At first glance, you might not notice the problems with the Make In India strategy. Modi’s plan has, after all, attracted significant foreign investment. Last summer, electronics manufacturer Foxconn announced plans to invest $5 billion in a factory in western India, while GM unveiled $1 billion in planned investments on the subcontinent. Other companies, including Airbus and Hyundai, also announced major investments in India to expand their global manufacturing footprint. Overall, foreign direct investment increased 39 percent over the last 18 months, making India the number one destination in the world for foreign investment.

This is all great news for India. But it may not create the jobs Modi needs to achieve his goal. The outlook for the Make In India campaign is not as rosy as recent investments suggest. The country only created 4 million manufacturing jobs between 2010 and 2014. At that rate of growth, the sector would only produce 8 million more jobs by 2022 — far below Modi’s target of 100 million. 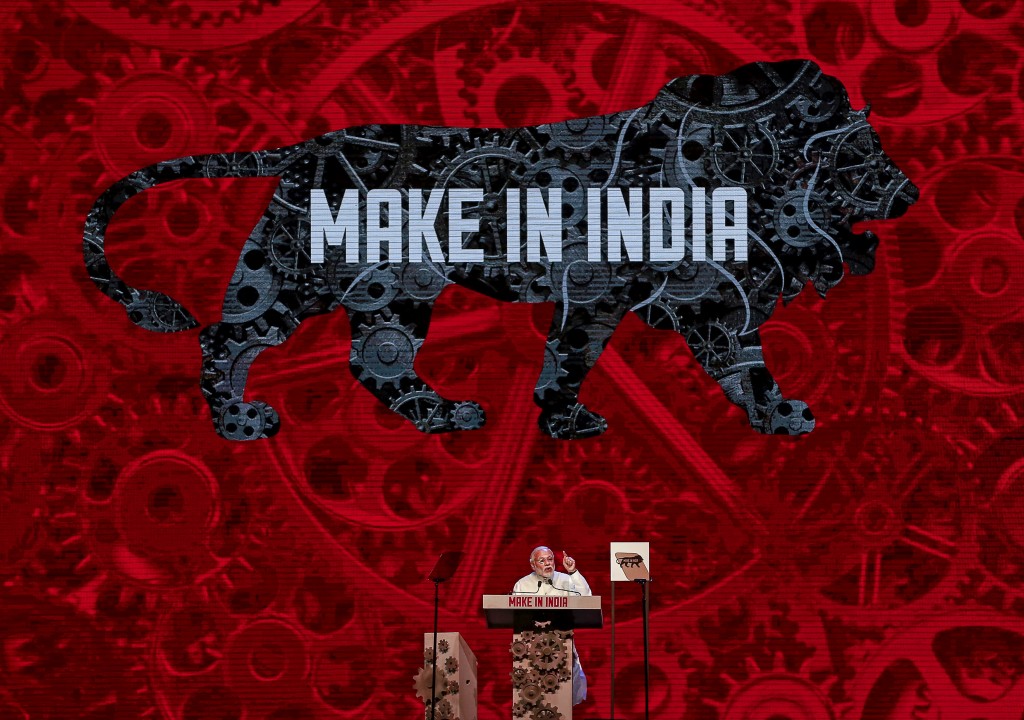 A likely culprit for this probable shortfall was embodied by one of Prime Minister Modi’s distinguished guests at this week’s promotional events. It was not the CEO of a powerful multinational, the prime minister of a major European country or even an accomplished development economist. It was a robot.

Thanks to rapid technological progress and the consistently falling prices of robots, production processes are becoming increasingly automated. As the Boston Consulting Group explained, “Many industries are reaching an inflection point at which, for the first time, an attractive return on investment is possible for replacing manual labor with machines on a wide scale.”

Zika virus is not only a health threat, but an economic one too

Even Foxconn, a company that uses more than 1 million employees to assemble Apple products, plans to automate 70 percent of its assembly line work over the next three years. The future of global manufacturing is clear: more robots, fewer workers. And this means a huge pool of low-cost labor is no longer a competitive advantage in development. Manufacturing may never again be the job-creation engine it once was.

If manufacturing cannot create the much-needed jobs, it’s hard to imagine how the Make In India campaign will generate the broad-based, sustainable growth the country seeks. Even if India becomes a global production hub, the declining labor intensity of manufacturing suggests the rewards from this accomplishment will be highly concentrated among very few. The economic tide may rise, but not everyone will have a boat.

The extreme automation represented by YuMi may seem new, but the dynamic of diminishing returns to industrialization has been in place for decades. Researchers have noted that the share of manufacturing jobs in industrializing economies has been consistently peaking at lower-income levels. In America, manufacturing employment peaked when per capita income was at $17,700; decades later, South Korean’s manufacturing employment peaked around $12,700; and in Brazil, it peaked around $8,700. More recently, some African countries have seen manufacturing employment peak with income levels around $2,000 per capita. As the Economist bluntly concluded, “The technological transformation now under way appears to be permanently changing the economics of development…China may be among the last economies to be able to ride industrialisation to middle-income status.”

Further, remember that per capita calculations are affected by demographics. Given that India is slated to become the world’s most populous country by 2022, the pressures to create jobs and incomes are rising. An additional 150 million Indians will enter the workforce over the next 15 years — roughly the population of Russia, the world’s ninth largest country. Will these new workers find jobs? And how much will these jobs pay? The reality is that productivity-enhancing technologies allow economies to produce more with less. India needs to produce more with more.

Highly productive robots address worker scarcity. But India has plenty of potential workers. What India needs is jobs, and lots of them. The country’s labor pool is currently growing by more than 1 million workers each month. The problem with productivity is that it exacerbates issues arising from abundance. Automated manufacturing is very similar to adding workers to an already large pool of available workers. It’s the opposite of what India needs.

It’s hard to imagine that anyone — in India or elsewhere — will succeed at putting the productivity genie back in the bottle. But focusing on what worked in China is a recipe for disappointment. It’s time to rethink the Make In India campaign, and it’s best to do so soon. Without a new strategy, Modi’s manufacturing mantra may mean malaise for millions. And worse, it may mean India never emerges as a developed nation.

Left: Employees work on an assembly line of Honda Motorcycle & Scooter India during a tour of the plant in the western state of Gujarat, India, on Feb. 17, 2016. Manufacturing-driven development may have worked for China, but India is too late to reap the benefits of such a strategy, writes Vikram Mansharamani. Photo by Amit Dave/Reuters