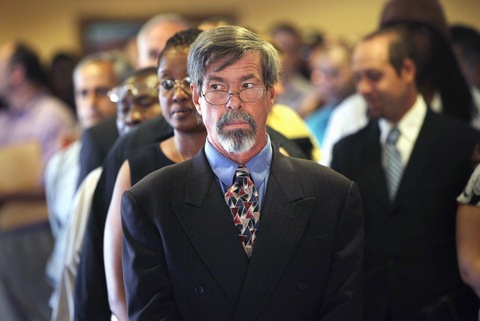 Perplexing even seasoned analysts, Friday’s jobs report showed a bigger-than-expected gain in jobs, while the unemployment rate rose slightly, although 7.3 percent was lower than some expected given last month’s government furloughs. So what’s going on with the data and how did the government shutdown affect collection? Photo courtesy of John Moore/Getty Images. If you’re a would-be analyst of the monthly unemployment data, Nov. 8 is a day to try men’s souls.

That’s because the government’s two monthly surveys — one of actual people (the “household survey”) and the other that surveys mainly pretend people like corporations (the “establishment survey”) — give drastically conflicting reports of the labor market on this jobs Friday.

According to the establishment survey, the economy added a bracing 204,000 jobs in shutdown-crippled October, far more than the 125,000 or so expected. Moreover, the previous two months were revised upward by a healthy 60,000.

By contrast, the household survey was a distinct downer, reporting that some 700,000 fewer Americans were working in October than had been in the month before, while the U.S. population rose by 200,000 over the same period, which would normally imply an added 120,000 or so working-age Americans.

And our own most inclusive measure of un- and underemployment, the modestly named “Solman Scale” or “U-7,” actually rose last month to 15.78 percent (see data, below), reflecting the fact that 25,398,000 Americans still say they want a full-time job but can’t get one. (U-7 is also calculated using data from the household survey.)

Our “Solman Scale” measures the “U-7,” adding to the officially unemployed part-timers looking for full-time work and “discouraged” workers — everyone who didn’t look for a job in the past week but says they want one.

Admittedly, a goodly chunk of the drop in the employment total represents government workers who were on temporary furlough, and they would be included in our U-7. Yes, as I keep pointing out, baby boomers are now hitting the Social Security retirement age of 66 at a rate of 10,000 a month, and if two-thirds of them are hanging it up — as they say they are — we’d get a labor force shrinkage of about 200,000 a month from the baby boom alone. But that still wouldn’t explain a labor force drop of nearly one million, nor would it affect the U-7 rise, nor the rise in the government’s own most inclusive reckoning of under-employment, U-6.

This is by no means the first instance of a discrepancy between the two employment reports. It happens regularly: Total jobs up! Unemployment rate up! (or vice versa) — prompting those of us who try to make sense of the data to view their month-to-month fluctuations with more than a pinch of skepticism.

Both of our interviewees for Friday’s NewsHour broadcast story — Dean Baker of the liberal Center for Economic and Policy Research and Michael Strain of the conservative American Enterprise Institute — said that they don’t, and you shouldn’t, put too much stock in any one month’s report.

But both agreed that when in doubt, go with the establishment survey. As Baker points out, it’s less subject to sampling error, particularly this month, when the response rate from the private and public “establishments” that employ people was very high, presumably due in large part to the extra week available to return the surveys. (Under non-shutdown circumstances, the unemployment reports would have been released a week ago.)

And so this month’s bottom line is positive. I like reading Justin Wolfers of the University of Michigan, who starts tweeting maniacally at 8:30 a.m., as soon the reports are made public.

The household survey is WEIRD. It says unemployment rose by only 0.1% to 7.3%. BUT it also says employment fell 735k and unemployment +17k.

My bottom line on today’s payrolls report: If you get further than cautious optimism, you’re getting ahead of the data.