Analysis: Student loan debt and an astonishing number no one’s talking about

When total student debt passed total credit card debt in America in 2014, it was headline news. Just one example:

But it turns student debt has just exceeded one-and-a-half times total credit card debt! Have you heard a peep? And yet look at the latest numbers from FRED, the data base of the St. Louis Federal Reserve Bank, one of the nation’s 12 regional Feds that closely monitors economic data.

First, here’s credit card debt (“revolving credit”) since 1970 through the first quarter of this year.

Notice where that credit card debt was in 2008 in nominal dollar terms — just over $1 trillion. But as a percentage of disposable income, which has risen since, the number is modest and right about at the average percentage over the past 50 or so years.

The next chart shows auto loans, however, and they are on a steeper upward slope.

I was struck by the fact that the auto loan total — at just above $1.1 trillion — has now eclipsed credit card debt. In reading further into the data, I was even more struck by the thought that this could be a very big deal. Why? Because subprime auto loans more than 60 days in arrears (the zig-zaggy red line in the next chart) are up at the heights they reached just before the Crash of 2008. 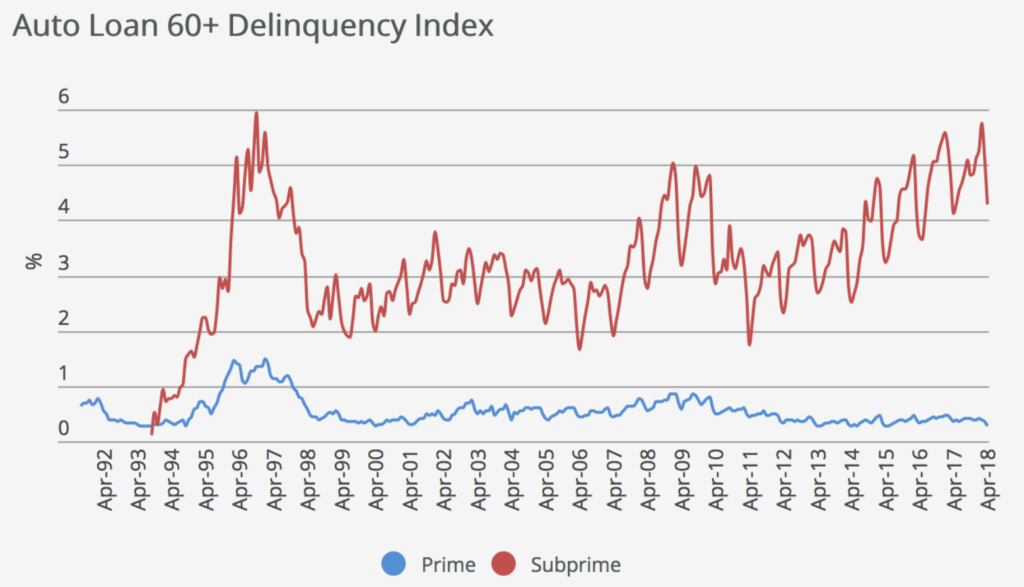 This is according to Fitch, the ratings agency that tracks such numbers. (Note that, over the past 25 years, delinquencies peaked in 1996. But incomes caught up during the economic boom of the late ‘90s, and delinquencies ebbed.)

And what is the student loan default rate? The latest numbers I can find are 7.4 percent for private colleges and universities, 11.3 percent for public ones (mainly due to high default rates at community colleges, where most students don’t finish their degrees) and a whopping 15.5 percent at for-profit schools. According to the US Department of Education website, “Secretary DeVos announced that the FY 2014 national cohort default rate is 11.5 percent.” But for-profit schools account for more than a third of all loans in default, according to Fortune magazine. Consider the University of Phoenix, with a student body in the neighborhood of 100,000. The default rate has been variously reported but the lowest number I’ve seen — from 2012-2014, is around 13 percent. The average tuition is just over $11,000 a year, according to the school’s website. The average student loan for students who borrow, according to USA Today’s College Factual: more than $8,000. And more than half of all students borrow. The graduation rate at the University of Phoenix, known for its online efforts, within four years? One percent. After six years: 19.8 percent. After eight years: 20.3 percent. So how worthwhile is the borrowing? You do the math.

Moreover, even the seemingly high official default numbers may be artificially low. The government’s General Accounting Office came out with a report in April that found what I call “ledger-de-main” — accounting sleight-of-hand — in student loan default reporting.

“According to federal law,” the report reads, “schools may lose their ability to participate in federal student aid programs if a significant percentage of their borrowers default on their Student loans within the first 3 years of repayment.”

So what do schools do?

“To manage these 3-year default rates,” the GAO reports, “some schools hired consultants that encouraged borrowers with past-due payments to put their loans in forbearance, an option that allows borrowers to temporarily postpone payments.”

The GAO’s conclusion was tactful but straightforward: “While forbearance can help borrowers avoid default in the short-term, it increases their costs over time and reduces the usefulness of the 3-year default rate as a tool to hold schools accountable.”

And so, as higher ed costs continue to rise faster than inflation and students borrow more and more to cover those costs, defaults continue apace. Do they pose a systemic threat analogous to the subprime default wave that helped trigger the Crash of ‘08? Probably not, but few people were worried back then either.

One similarity is striking: false expectations— in the years before the Crash, that housing prices would continue to soar, thus justifying the borrowing; more recently, that going to college (any college) will increase earnings enough to pay off the loans. Ellen Ruppel Shell’s op-ed in the New York Times on May 16 reviews the latest data contradicting that hopeful myth.

Meanwhile this item, also from the Times on May 13, suggests that economic due diligence at for-profit universities is likely to receive less government scrutiny, at least for awhile.

“Members of a special team at the Education Department that had been investigating widespread abuses by for-profit colleges,’ the Times reports, “have been marginalized, reassigned or instructed to focus on other matters, according to current and former employees. The unwinding of the team has effectively killed investigations into possibly fraudulent activities at several large for-profit colleges where top hires of Betsy DeVos, the education secretary, had previously worked.”

To the extent that the Times story is accurate, and I see no good reason to doubt it, this seems an odd time to turn a blind eye to student loan-sustained for-profit colleges — the moment at which total student debt in America has pushed past $1.5 trillion and topped 150 percent of credit card debt, just as the payoff from college attendance at less rigorous schools has come more and more into question. And just as student borrowing rates are about to rise.

Above: Do student loan defaults pose a systemic threat analogous to the subprime default wave that helped trigger the Crash of ‘08? Photo by Getty Images