The Trump administration’s tariffs on aluminum imports are leading to new investment in what was a dying industry, according to a new report from the left-leaning Environmental Policy Institute.

The report found U.S. aluminum production is expected to increase 67 percent between 2017 and the end of this year because of increased investment. Trump imposed a 10 percent tariff on imported aluminum in June of this year.

U.S. aluminum production is expected to increase 67 percent between 2017 and the end of this year.

Last year, there was only one smelter, a factory used to turn ore into aluminum, in operation in the entire United States, the report indicates. At the end of 2018, seven are expected to be up and running, resulting in more than 1,000 new jobs.

Aluminum producers aren’t the only ones benefiting from the tariffs. Companies that purchase aluminum, such as producers of metal sheeting and aluminum pipes, have announced $3.3 billion in new investments, which could result in an additional 2,000 new jobs, the data showed.

Both aluminum producers and downstream buyers “seem to think the tariffs have helped stabilize the domestic market and ensured there will be a demand for their product,” said Robert Scott, a trade economist and the author of the report.

But it’s not that simple. For instance,the job gains, which the report attributed to the tariffs, represent a small portion of the overall growth of the economy. The U.S. economy added 155,000 jobs in November alone.

Here are some key point to consider.

Tariffs create both winners and losers

“It’s great when we see new life in an industry that is in distress, but there are other industries that will find the increased costs [from the tariffs] to be a challenge,” said Kadee Russ, an associate professor of economics at University of California, Davis, and a former senior economist on the Obama administration’s Council of Economic Advisers.

If companies cannot absorb the costs, they must pass them along to consumers, who might be less inclined to buy their product at a higher price.

Users of aluminum further down the supply chain, such as beer companies that use mostly domestically-sourced aluminum for their cans, for example, have said the tariffs are hurting their business.

Scott argued that the harm done by the tariffs is overblown. He said the price increases are often so small that customers do not notice them — or, the costs are swallowed up by other market factors.

How much success or failure can you blame on tariffs?

Identifying the other factors that may be affecting the industry can be difficult, especially in a strong economy. Russ said companies might still be doing well, but not as well as they would have without the tariffs.

For instance, employment in breweries, which are grouped with wineries and distilleries in the Bureau of Labor Statistics data, has increased in recent years, although more slowly in recent months, according to information included in Economic Policy Institute report. 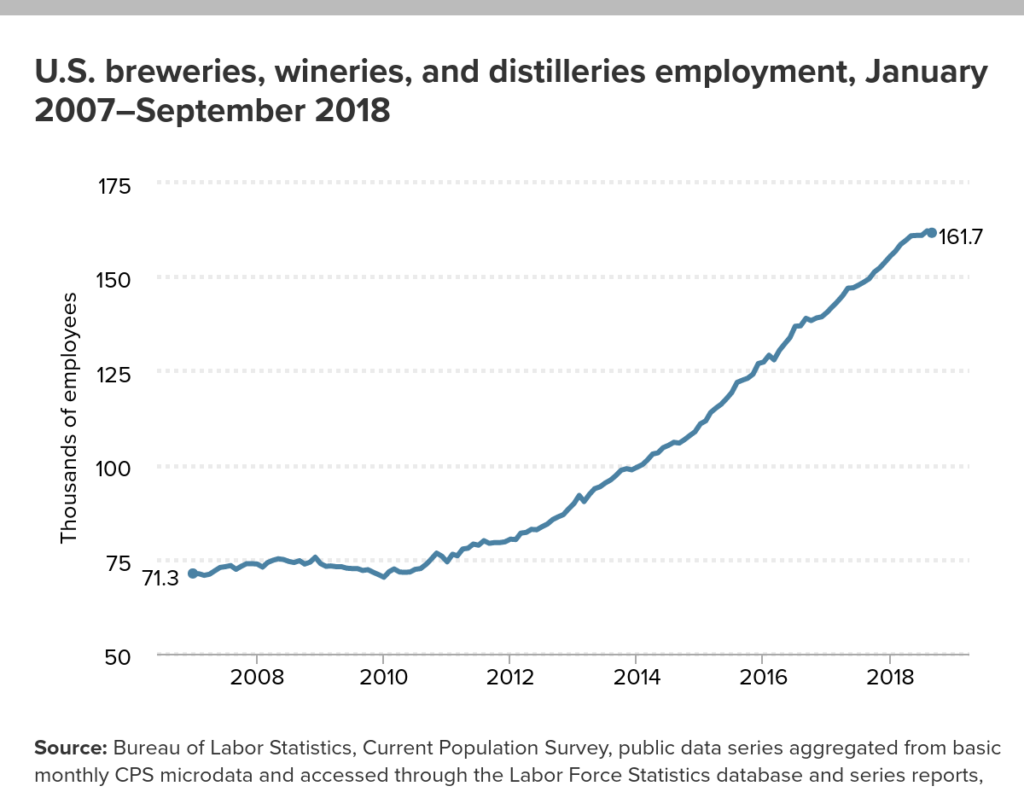 The U.S. aluminum industry is still a fraction the size of its Chinese counterpart

Even with the boost in production, the U.S. is expected to produce about 1.24 million tons of aluminum this year. China produces more than 32 million tons per year.

In fact, China produces more of the metal than it can use or sell, creating what’s known as excess capacity. The oversupply tends to push down the global price of aluminum, making it difficult for American aluminum suppliers to compete.

Economists say the unilateral tariffs have done little to solve that underlying problem because the U.S. does not purchase enough Chinese aluminum to have a large enough impact on its price.

Left: A worker is seen inside the Magnitude 7 Metals LLC aluminum smelter which recently reopened and is taking on hundreds of local workers in New Madrid, Missouri. Photo by Karen Pulfer Focht/Reuters