As Trump inflames trade battles, other countries make deals that leave U.S. behind

As the Trump administration stokes a trade war with China and tries to smooth over relations with long-term allies like Canada and the European Union, other nations are forging ahead with free trade agreements among themselves, a shift that could isolate the U.S. economy in the long term.

President Donald Trump has argued that past trade deals hurt the U.S. economy and should be renegotiated or scrapped in favor of agreements that benefit American workers. But if the U.S. is not at the negotiating table, economists and former U.S. trade officials warn, it risks missing out on substantial economic benefits and the chance to shape international trade rules that American companies will be forced to follow.

“It seems like country after country and region after region are pursuing trade deals with each other,” said Wendy Cutler, vice president of the Asia Society Policy Institute and a former Obama administration official who oversaw negotiations of the Trans-Pacific Partnership, known as TPP.

The European Union finalized the largest trade agreement in its history earlier this month.

The European Union finalized the largest trade agreement in its history earlier this month. The deal with Japan covers nearly a third of the global economy and creates one of the largest free trade areas in the world.

Negotiators from the 11 countries involved in the TPP, which has been renamed the Comprehensive and Progressive Trans-Pacific Partnership, have also begun talks to allow more countries to enter into the agreement.

Trump withdrew the U.S. from the TPP his first week in office. In April, he floated the idea of rejoining the deal, which would have covered $1.5 trillion worth of trade with the U.S., but tweeted the next day that he would consider reversing course only “if the deal were substantially better than the deal offered to Pres. Obama.” 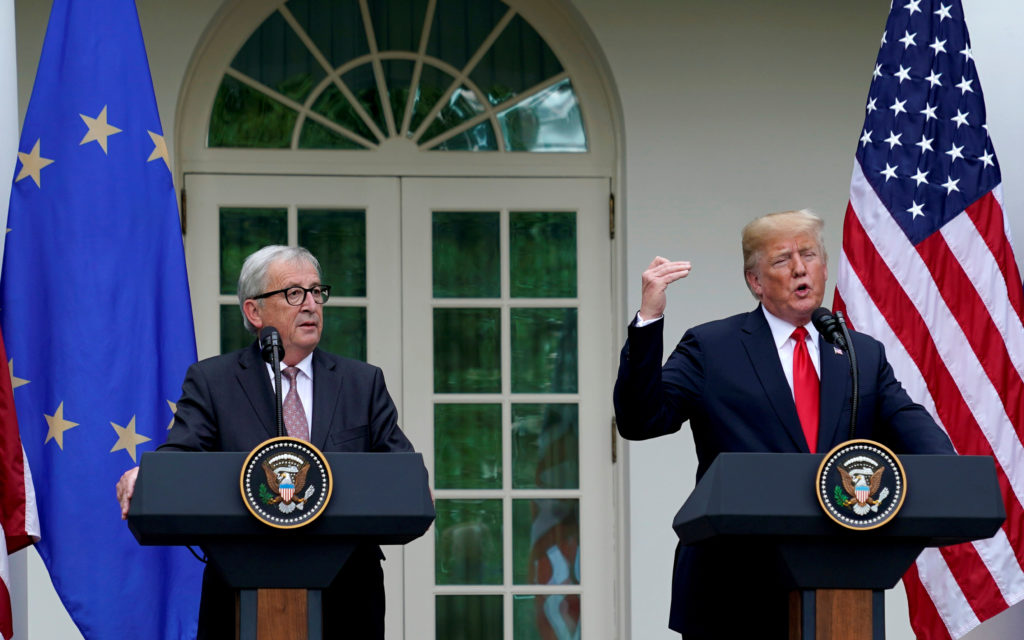 President Donald Trump and President of the European Commission Jean-Claude Juncker speak about trade relations in the Rose Garden of the White House in Washington, D.C. Photo by Joshua Roberts/Reuters

Meanwhile, Mexico and South Korea have announced their interest in becoming a part of the Pacific Alliance, a trade bloc of countries bordering the Pacific Ocean. The Pacific Alliance this week began talks of a free trade agreement with the South American bloc Mercosur, made up of Argentina, Brazil, Paraguay and Uruguay.

That comes as Mercosur, the world’s fourth largest trading bloc, is pushing to conclude a free trade agreement with the EU by September.

Many of these deals were already in the works long before Trump came into office. But Cutler said countries are now trying to “hedge their bets” with more free trade deals in case the U.S. hits them with tariffs. Trump has imposed tariffs on $34 billion worth of Chinese goods, threatened tariffs on another $200 billion worth of goods from the country, and set a 25 percent tariff on all steel imports and a 10 percent tariff on aluminum imported into the U.S. Trump issued a temporary exemption from the tariffs for Canada and Mexico, but later withdrew the exemption.

“We’ve helped accelerate a trend that is working against us,” Cutler said.

Trump has said the tariffs are not isolating the United States. Instead, he argues they are doing the opposite — forcing foreign nations to the bargaining table.

“Countries that have treated us unfairly on trade for years are all coming to Washington to negotiate,” Trump tweeted Tuesday, the day before European Commission President Jean-Claude Juncker’s visit to the White House.

After their meeting Wednesday, the two leaders announced they would halt any new tariffs while they work toward eliminating all tariffs on non-automotive goods, including steel and aluminum.

Cathryn Clüver Ashbrook, the executive director of the Project on Europe and the Transatlantic Relationship at Harvard University, said the agreement was a symbolic win for both sides but should not have been necessary in the first place.

“A lot of these trade questions with NAFTA, the European Union and China are self-created conflicts intended to create momentum with the base of the Trump electorate,” Ashbrook said.

In addition to imposing new tariffs, the Trump administration has halted negotiations between the U.S. and EU on the Transatlantic Trade and Investment Partnership, or TTIP, which had been in the works since 2013. Ashbrook said now the U.S. is looking at negotiating a “TTIP-lite.”

“I think it will take us a significant amount of time to get back to where we already were,” she said.

International trade deals typically take years to negotiate so the consequences of the U.S. isolating itself might not be fully known for some time.

But “the longer it goes on, the more we have an international set of rules that are not to our interests,” said Peter Allgeier, who served as the U.S. deputy trade representative under Presidents George W. Bush and Barack Obama.

In the agriculture sector, for example, farmers could be denied access to developing markets. Pharmaceutical companies could face new barriers to establishing drug patents in foreign countries, and the telecommunications industry could be forced to play by different rules when transferring data across borders.

The Trump administration has said it is open to bilateral deals — trade pacts between two countries — that would achieve similar results as multilateral deals between several nations. The trouble, Allgeier said, is that if the U.S. makes bilateral deals with multiple countries, instead of agreeing to a regional deal, each individual agreement would establish a different set of rules.

Even if countries were open to bilateral deals, the Trump administration’s unconventional approach appears to be making many nations more wary of doing business with the U.S.

“The United States’ trading partners are turning to other nations, where the requests are more predictable and in line with traditional trade practices,” Cutler said.

But being left out might not be such a bad thing, according to opponents of more recent trade deals like the TPP.

“We like to think of ourselves as being open, free-market, globalist, and the protector of the free world. In that mode, you don’t have to do every deal that’s been given to you,” said Clyde Prestowitz, the president of the Economic Strategy Institute, a Washington, D.C.-based think tank that focuses on trade. 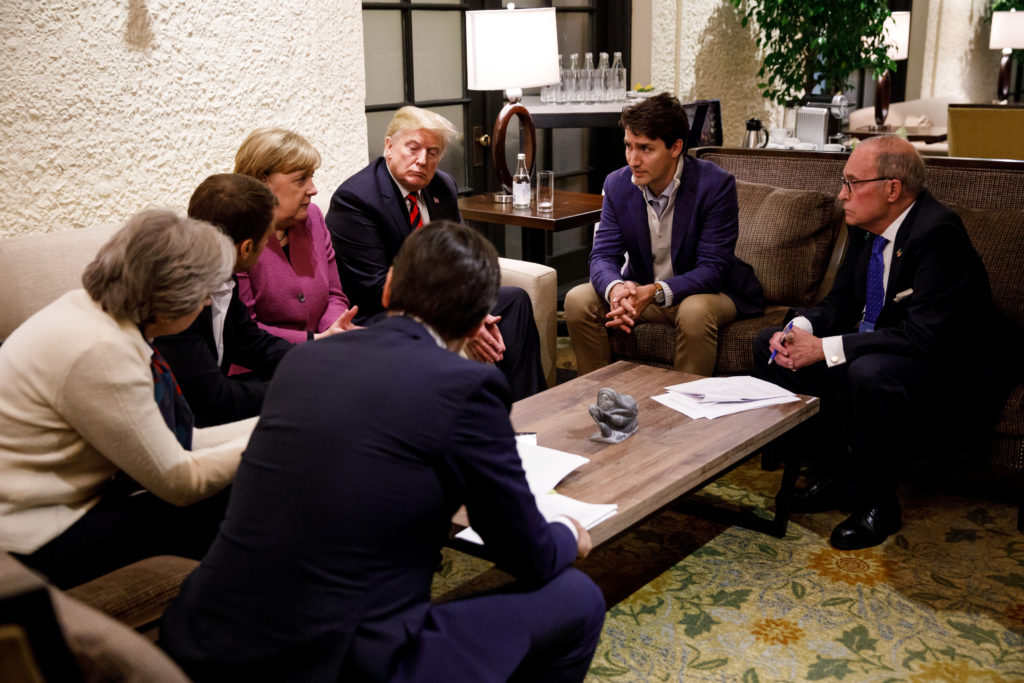 Prestowitz echoed Trump’s view that the global system has been unfavorable toward the U.S. for many years. Until the U.S. can get a better shake in the global market, he said, it “largely doesn’t matter” whether the country signs on to new trade deals.

The success or failure of the Trump administration’s approach to foreign trade could be determined less by who gets the last jab than by the state of the U.S. economy.

On the other hand, if the U.S. economy continues to grow, the long-term consequences could be negligible.

Trade experts may disagree on policy, but most acknowledge the atmosphere around international trade negotiations has changed. Under Trump, there is a heightened sense of showmanship to all of the trade talks, said Tim Keeler, a former chief of staff to the U.S. trade representative in the George W. Bush administration.

With Trump regularly issuing threats on Twitter, foreign leaders have also started their own public campaigns.

“There’s a lot of public jousting, and that’s unusual,” said Keeler, who works as an attorney representing clients on trade issues at the law firm Mayer Brown LLP.

Negotiations on trade issues can get heated, but that back and forth typically takes place at lower levels of government and would not catch the public eye, Keeler said.

But with Trump regularly issuing threats on Twitter, foreign leaders have also started their own public campaigns.

When the U.S. offered to make free trade deals with its allies at a recent G20 meeting, European leaders made clear such offers were nonstarters as long as the U.S. was imposing tariffs on steel and aluminum.

French Finance Minister Bruno Le Maire told reporters the EU would not negotiate “with a gun to our head,” according to Reuters.

During the ceremony solidifying the trade deal between the EU and Japan, European Council president Donald Tusk said the deal indicated Japan and the EU would be “predictable,” and would “continue defending a world order based on rules, on freedom, on transparency and common sense.” Economic analysts viewed that as a not-so-veiled message to the U.S.