The move will likely have significant economic implications for the global cannabis industry as companies clamor to grab a share of the sales and experiment in what is only the second country in the world to legalize recreational marijuana.

“A lot of countries are going to be looking at Canada and their ability to make this a success,” said Colin Busby, a research director at the Canadian-based Institute for Research on Public Policy. “There is always going to be an economic incentive for governments to get involved in this, given the size of the marketplace.”

That economic incentive, for businesses and the government, will come in the form of revenue, jobs and taxes, including income, sales and excise taxes.

But many investment analysts warn against overhyping the market potential, arguing that Canada’s economy is still relatively small compared to countries like the United States, where 30 states have legalized medical marijuana and another nine, plus the District of Columbia, have legalized its recreational use. And they say tight regulations both in Canada and the U.S. are likely to limit the market’s growth for years to come.

Here’s what experts say about the market for marijuana in Canada and beyond.

What does the new law do?

Canadians who are 18 years or older are now allowed to possess up to 30 grams of legal cannabis in public and can buy that cannabis dried, fresh or in the form of oil from a licensed retailer. Beyond that, much of the regulations vary because exactly how cannabis is bought and sold is being left up to each Canadian province.

109 new marijuana shops are expected to open in Canada immediately.

As of Wednesday, 132 licenses to produce or sell marijuana have been issued, with hundreds of more applications waiting to be processed. An Associated Press survey found 109 new marijuana shops are expected to open immediately.

Canada is still restricting vaping pens and concentrated THC, the psychoactive chemical in cannabis that gets users high, for at least one year. The Canada health department said it needs more time to study those products’ health effects.

How big is the Canadian market?

Canada already has a well-established market for medical marijuana, which has been legal in the country since 2001. Illegal use of the substance has also spiked in the last decade.

A total of 4.7 million Canadians, or 18 percent of the population 15 years and older, used marijuana in the past year, either recreationally or for medical purposes, according to a 2017 survey from Canada’s national statistics agency. (In comparison, 9.5 percent of the adult U.S. population, or about 30 million people, said they used pot in the last year, according to data from the National Institutes of Health.) 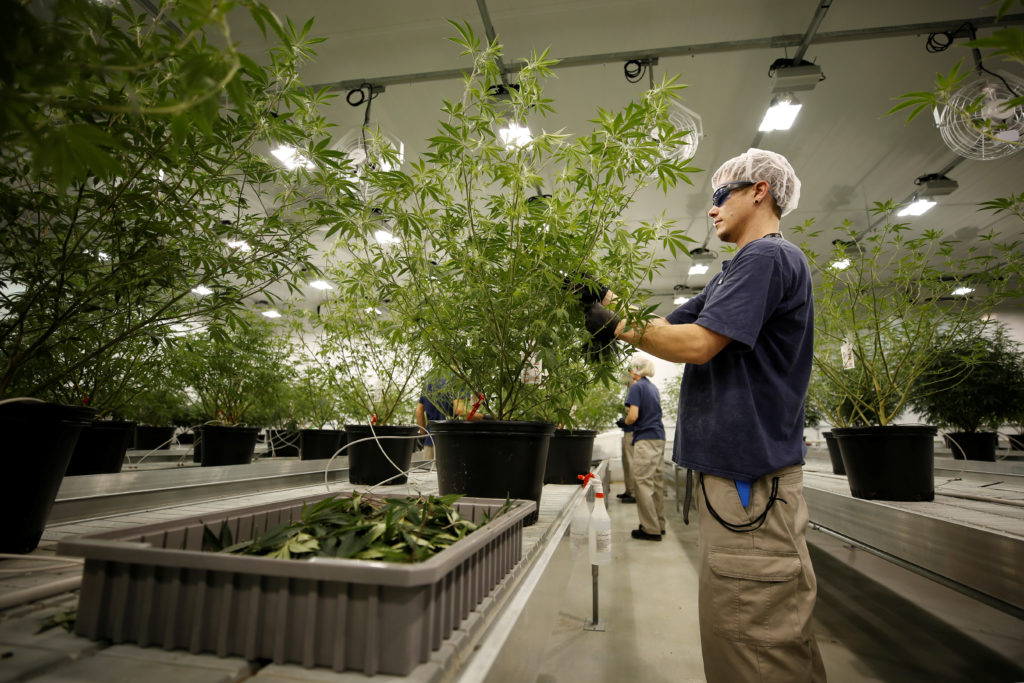 Statistics Canada estimates Canadians spend about $4.4 billion annually on cannabis. Of that, just $570 million was spent on legal medical marijuana in 2017, according to The Arcview Group. But as more Canadians move from the illicit to legal markets, the research firm predicts that number will climb to $1.3 billion in 2018, and $5.5 billion by 2022.

So while there likely won’t be a substantial spike in the number of Canadians using cannabis, they will be buying it legally — and that means tax revenue for the Canadian government. Estimates put the potential tax revenue as high $1 billion. In the U.S., states that have legalized recreational marijuana have generated hundreds of millions of dollars in taxes.

Though both medical and recreational marijuana use is still illegal at the federal level, the U.S. marijuana market was $8.5 billion in 2017 and is expected to grow to $23.4 billion by 2022, according to The Arcview Group.

Pros and cons for investors

The relatively small Canadian market for marijuana has not stopped investors from flooding in. Stocks of Canadian cannabis companies have skyrocketed in recent months as investors prepare for a spike in demand, and, hopefully, profits.

But some industry watchers are warning companies should not to get too far ahead of themselves — for one reason, because of restrictions on things like vaping pens and concentrated THC.

“That is why we are being less bullish about Canada’s growth going forward than we saw in Colorado, Washington and Oregon, where a much freer market approach sparked an explosion of growth by startup companies,” said Tom Adams, the managing director for the cannabis market research firm BDS Analytics.

Stocks of Canadian cannabis companies have skyrocketed in recent months.

Meanwhile, some alcohol companies are playing the long-game when it comes to pot, betting that regulations will loosen over time.

Molson Coors Brewing Co. announced earlier this year it would develop cannabis-infused beverages in Canada. Corona’s parent company Constellation Brands this year bought $4 billion worth of stock in Canopy Growth, a cannabis producer that already has a number of products on the market and is one of the largest players in the Canadian marijuana industry.

Part of that investment could be more about alcohol companies hedging their own potential losses to cannabis. Research shows that consumers typically trade off one controlled substance for the other when deciding how to spend their discretionary income

“It’s quite rational. If you have $20 to spend on a Friday night activity, if you are in that recreational marketplace, the question really comes down to which one are you going to consume,” said Busby, the public policy researcher.

Who has the upper hand?

Canada and the U.S. aren’t exactly competitors in the marijuana industry because regulations are keeping the two markets isolated. But companies are already looking for ways to broaden their horizons, thinking about a world in which they could freely compete across borders.

Those companies are likely to find themselves in tough competition with well-established Canadian firms. But U.S. businesses that already produce specialized marijuana products, such as vaping pens and edibles, on a large scale might have “first-mover” advantage in Canada if that country loosens restrictions on those products in the future. 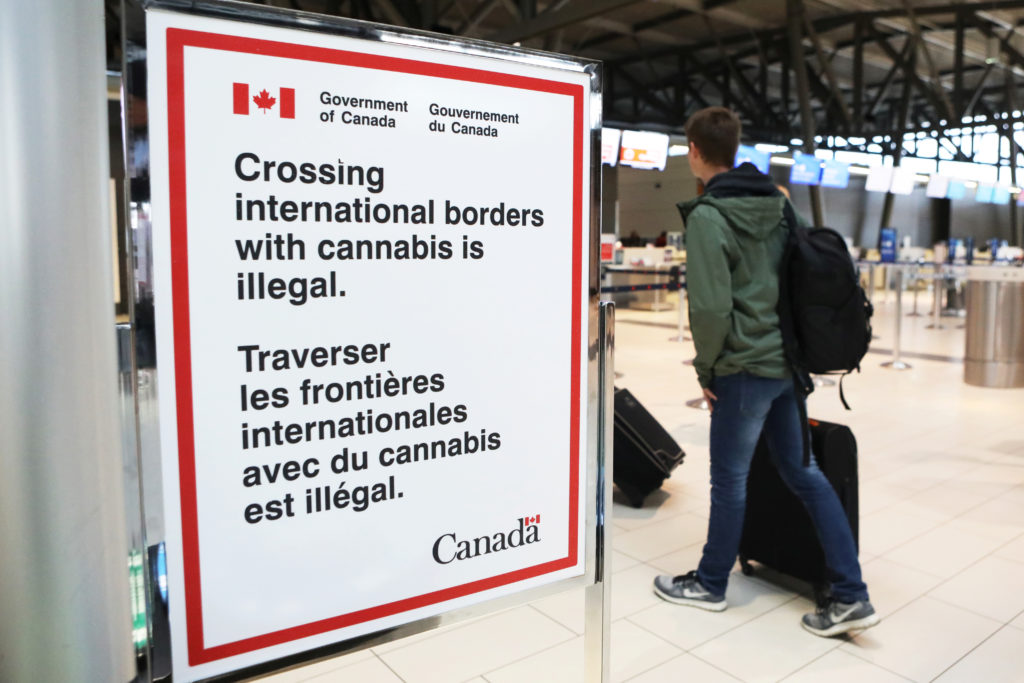 A sign warning travelers about crossing international borders with cannabis is seen at the Ottawa International Airport. Because marijuana is still illegal at the federal level in the U.S., the Canadian and U.S. markets are still largely divided. Photo by Chris Wattie/Reuters

Canadian companies are on the move, too. Canopy Growth on Monday announced it was buying a Colorado-based research and development company named ebbu as a way to develop “novel cannabinoids at scale.”

Canadian firms also have their own a distinct advantage when it comes to raising capital. They can get bank loans in Canada more easily than their U.S. counterparts, and they can be listed on the Canadian stock exchange. (Some U.S. pot companies are now trying to get onto the Canadian stock exchange as well.) Canopy Growth is the largest publicly traded marijuana company, valued at more than $13 billion.

Other U.S. companies can take some solace from the fact that, at least for now, Canadian companies cannot sell their products in the U.S. or anywhere outside of Canada.

“They have all this capital, and they don’t have anywhere to send it,”said Micah Tapman, the managing director of Canopy Ventures, an unrelated venture capital fund based in Colorado. This means, for now, “there is no global market to speak of,” he added.

Left: Canada on Wednesday became the second country in the world to legalize marijuana. Uruguay was the first. Photo by Chris Wattie/Reuters