Could Bill Belichick’s grasp of economics be the key to the Patriots’ success?

The summer after the New England Patriots won their first Super Bowl, I visited their training camp for a PBS NewsHour story on their — and the NFL’s — success, from the point of view of economics. (That’s what economics really is, by the way: not a science but a point of view, an angle on how the world works.)

A substantial part of “Patriot Way” is the practical application of the economic concepts of opportunity cost and… convex preferences.

I confess that I went not just as an economics reporter but as a Patriots fan, a status now akin to “Trump supporter” in the eyes of those revolted by both the team and the president (no offense meant to either.) But in the summer of 2002, Spygate, Deflategate, the murders attributed to tight end Aaron Hernandez, and Donald Trump the Pats-Fan President were all to come. There was no Patriots dynasty, no Tom Brady-v.-Time health regimen, and no stigma whatsoever.

When I interviewed Coach Bill Belichick, then beginning only his third year with the Patriots, he gave no inkling of the Lord Voldemort he would become for so many. He was gracious, moderately expansive, and responsive. (He even thanked me at the end of half-an-hour, saying “that was very interesting” with a handshake.)

He: I majored in economics.
Me: So what have you applied from economics, if anything, to your coaching career?
He: Well, not a whole lot.
Me: Anything?
He: I think some of the economic concepts have been helpful in dealing with the salary cap but for the most part, probably one percent.

One percent? This was either disingenuous, or maybe he had just never much thought about it. But in either case, the coach was dead wrong. Because in fact, a substantial part of “Patriot Way” is the practical application of the economic concepts of opportunity cost and, as I learned at this year’s annual economics convention, convex preferences. 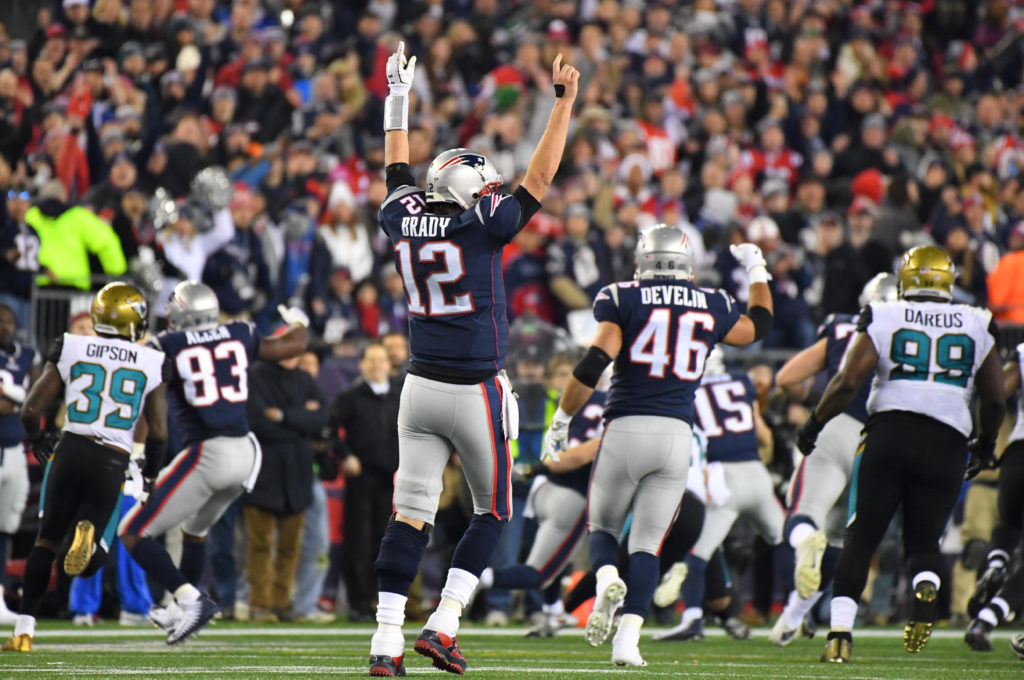 New England Patriots quarterback Tom Brady celebrates after a first down by running back Dion Lewis (33) picks up a first down in the fourth quarter in the AFC Championship Game against the Jacksonville Jaguars at Gillette Stadium. Photo by Robert Deutsch-USA TODAY Sports

The relevance of both concepts is a function of the NFL salary cap Belichick underplayed, which, for you non-football fanatics, forces every team to work with the same finite budget, $71 million dollars back in 2002; $167 million this year.

Scott Pioli, the coach’s then-director of player personnel and the coach’s right-hand man in the front office, accorded cap management pride of place in explaining the Patriots’ unimagined 2001 success.

“Our 45th through the 53rd players on our roster were probably better than many of the other teams’ backup players,” Pioli said.

Managing the cap meant not overpaying for “marquee” players in order to afford average ones at positions for which other teams can only pay bottom dollar, and as a result wind up with bottom-tier talent. This is “opportunity cost,” arguably the most important practical idea in economics. The opportunity cost in football? Overpaying a star, and thus losing the opportunity of signing a player for worse money who isn’t that much worse a performer but, due to the mayhem of the game, may well have to play due to injury.

This idea is based on another deep truth in economics: diminishing returns.

As Pioli put it back then, “We have only a certain amount of dollars to spend, and we have to build a team. And if we overspend in one area, we’re not going to be able to fill in certain other areas where it’s going to affect the team.”

In the 16 years since, the Patriots have become famous for jettisoning stars who, the team feels, command more on the open market than they’re worth. For the NFL buffs reading this, the opportunity cost of Lawyer Milloy, Richard Seymour, Asante Samuel, Logan Mankins, Vince Wilfork — lustrous names in Pats history all — had become too high.

Bill Belichick learned the concept of opportunity cost at Wesleyan, and maybe even earlier at Phillips Academy Andover, the prep school he attended. But what about “convex preferences”?

Diminishing returns has been documented for almost any human activity (except love and sex, perhaps), and it also holds more broadly in the world around us. As in the pay scale for football players. You’re buying a team with a fixed budget. Are you better off allocating the great bulk of it to “the best” players. Oh, maybe for the quarterback, whose quality determines such a disproportionate share of the team’s success. But after him? The returns on what you spend tend to diminish. 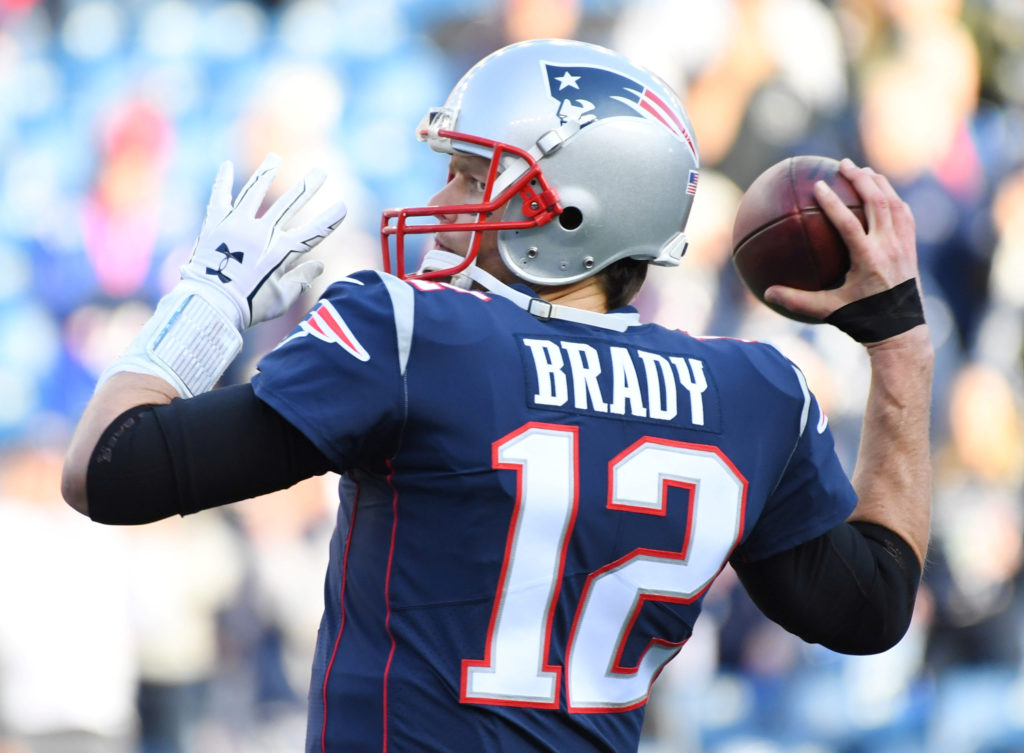 So you want a mix: fewer stars; more what you might call “average” players. Which is what the concept of convex preferences connotes: that if you’re buying a basket of goods, you don’t load up on just one thing but a mix. In the ever-edited words of Wikipedia, “convex preferences are an individual’s ordering of various outcomes, typically with regard to the amounts of various goods consumed, with the property that, roughly speaking, ‘averages are better than the extremes.’”

And finally, why are they “convex”? Because economics just loves graphs and if you got as much value-per-dollar for every star as you did for every under-the-radar player, the trade-off would be one-for-one: a straight line in the graph below. So the curve is “convex” to bottom of the graph, where the horizontal and vertical axes meet. 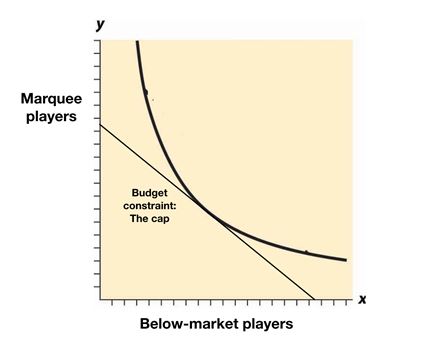 The point is that since buying stars is subject to diminishing returns (and so is buying too many “average” players), then you’re better off with fewer of both — not loading up with 100 average players of whom only the best 53 make the cut, say, and not, of course, shooting your wad on 10 stars and bringing 43 guys in off the street at minimum wage. (Though admittedly, “minimum wage” in the NFL is $6,300 a week for the 10-man reserve known as the practice squad.)

Where NFL teams typically go wrong is falling for the stars and overpaying them, often because of public and media pressure, leaving too little money to optimally fill out their roster. Director of Player Personnel Scott Pioli said as much to me in 2002. The Patriots didn’t overpay “because there’s not always a direct correlation between marquee names, marquee salaries, and good football players.”

So you want a mix: fewer stars; more what you might call “average” players.

Pioli was a football groupie college student who drove daily to training camps in New York on his own from college in Connecticut in the mid-‘80s. Belichick, then an assistant coach with the New York Giants, noticed Pioli’s dedication and gave him an office to sleep in instead of commuting. Pioli went on to work for Belichick in Cleveland and Boston. It’s safe to say he learned pretty much everything he knew about football management from Belichick. So when he explained the economic strategy that built the improbable winner of the Super Bowl at the end of the 2001 season in which the Patriots were given a less than 8 percent chance of winning, that strategy was Bill Belichick’s, economics major. The key to the game and season for the Patriots and ever since: quarterback Tom Brady, paid $310,000 in 2001 to back up a star named Drew Bledsoe, who had signed a 10-year, $103 million-dollar contract before the season began (though only $14 million was guaranteed). Bledsoe got hurt; the bargain-basement backup took over; and with Brady at the helm and Bledsoe soon traded, the rest is a history as unexpected as it is unprecedented.

All because the Patriots applied the concept of opportunity cost, which has since become a standard metric of quantitative analysis in many sports. And because the team understood, at least intuitively, the notion of convex preferences. (The Patriots also have a different utility curve, but that’s for another column.)

Super Bowl coverage this week suggests the Philadelphia Eagles have, on average, the better roster for the game on Sunday. Advanced analytics like those at Pro Football Focus agree. What that suggests to me is that they too have learned to apply the key lessons of economics.

Outcome? The betting public thinks the Patriots will win by more than four points, which translates into a roughly two-thirds likelihood of success. But hey, it’s a probabilistic universe. The Patriots won their first Super Bowl with the odds more than 10-1 against them. And Donald Trump’s price on the prediction markets, as late as Election Day evening, was one chance in nine.

But yes, we will share the winner with you…on Monday.

Editor’s note: We replaced an earlier version of the graph above in an effort to provide a clearer picture of convex preferences.