Could the Trump-Xi meeting be a turning point for trade?

Few people expect President Donald Trump and Chinese President Xi Jinping to end their trade war when the leaders meet Saturday at the G20 summit in Buenos Aires, Argentina. But officials on both sides in recent days have played up the possibility of a truce, raising hopes that the dispute will not escalate further.

Over the spring of this year, the U.S. has imposed tariffs on $250 billion of Chinese goods, including chemicals, food, fabric and steel. China responded with its own tariffs on $110 billion worth of U.S. goods.

Trump has threatened to expand tariffs to cover more products and raise the existing import tax on 5,745 goods from 10 percent to 25 percent if the two nations cannot come to an agreement before Jan. 1.

A tariff hike would likely hit not only China’s businesses but U.S. consumers as well, because it would be much more difficult for companies in both countries to absorb the added costs.

Here’s what we might see on trade during the G20 meeting.

Trump is scheduled to have a dinner meeting with the Chinese leader Saturday evening. Top aides to both leaders will also attend.

A tariff hike would likely hit not only China’s businesses but U.S. consumers as well.

The White House has not released the names of other officials who plan to participate, but the South China Morning Post reported Thursday that White House trade policy adviser Peter Navarro would attend. Navarro is known for his hardline economic approach toward China’ and has frequently found himself at odds with others within the Trump administration, including Treasury Secretary Steve Mnuchin and White House economic adviser Larry Kudlow, who prefer a more moderate stance.

It is unclear whether there is any formal agenda for the dinner, but there are a number of issues that could be discussed.

Tariffs are likely to be front and center. Kudlow at a White House press briefing on Tuesday listed three other items of interest: intellectual property theft, forced technology transfers and issues of ownership for U.S. businesses that want to operate in China. Currently, these businesses must establish a joint venture with a Chinese company that holds the majority stake, something the Trump administration has opposed.

What are the White House and China signaling?

Both White House and Chinese officials have spoken out about their expectations for the summit.

China’s vice minister of commerce said at a press briefing last week that he hopes “both sides can work together on the basis of mutual respect, balance, honesty, and mutual benefit and finally find a solution to solve the problem.”

Kudlow also floated the idea of a “breakthrough” in the trade battle. He told reporters Tuesday that Trump believes there is “a good possibility that a deal can be made and that he is open to that.”

But Kudlow also issued a warning, saying the Chinese should not try to wait out Trump on the trade battle. Trump is “not going away,” Kudlow said. “I hope they understand that.” 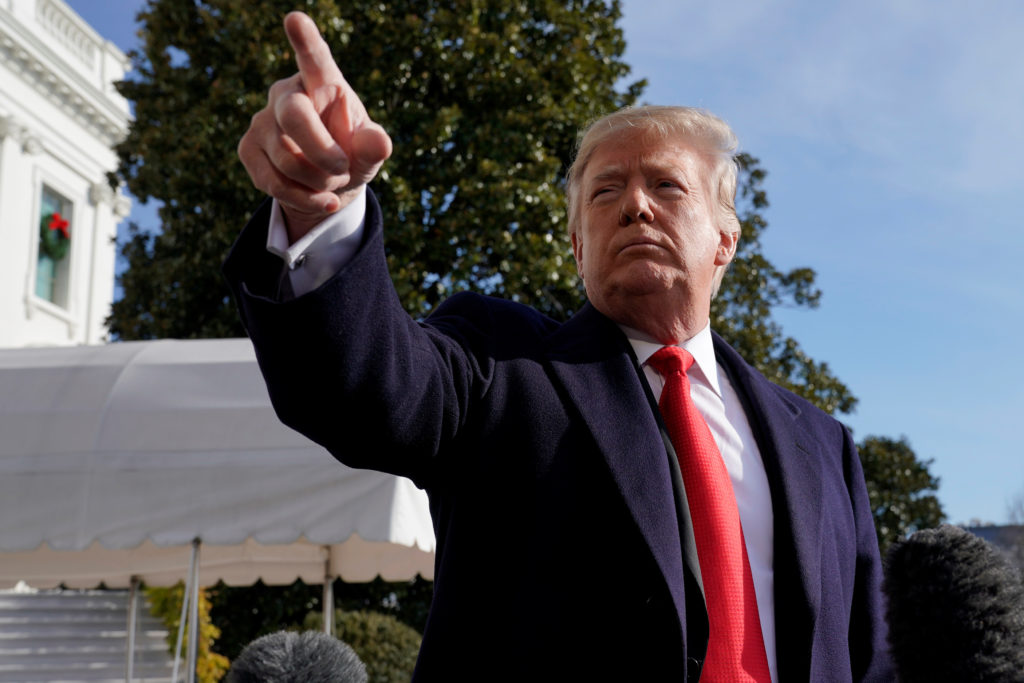 President Donald Trump talks to reporters as he departs for travel to the G-20 summit in Argentina. “I’m open to making a deal. But, frankly, I like the deal we have right now,” he said about his upcoming meeting with Chinese President Xi Jinping. REUTERS/Jonathan Ernst – RC171399EBE0

Trump weighed in Thursday before heading to Buenos Aires, saying does not know if he wants to make a deal because of the money flowing the U.S. in the form of tariffs.

“I think China wants to make a deal. I’m open to making a deal. But, frankly, I like the deal we have right now,” he said.

The Trump administration’s messaging leading up the summit indicates no one really knows what the outcome of the meeting will be, said Wendy Cutler, a vice president at the Asia Society Policy Institute and the former acting deputy U.S. trade representative for negotiations in the Asia-Pacific region under the Obama administration.

Still, Cutler noted that Trump could be sowing confusion intentionally, a tactic that has served him well in some previous international disputes, including with North Korea and the European Union. She said if China does not know how much the president is willing to negotiate, it could give Trump more leverage.

Peter Allgeier, who served as the U.S. deputy trade representative under Presidents George W. Bush and Barack Obama, said Trump’s rhetoric is not an effective way to negotiate because it does not bring the two sides any closer to common ground.

“It’s political PR, and I think it’s kind of amateurish frankly,” he said.

What are the potential outcomes?

Foreign policy experts agree it’s in the political and economic interest of both countries to come to some kind of an agreement.

China does not want to be hit with more U.S. tariffs, and Trump wants a win to show his hardball tactics against China are paying off.

It is unlikely any substantial deal will be reached.

Still, it is unlikely any substantial deal will be reached.

For that to happen, representatives from the two countries would have needed to have lengthy negotiations and have already agreed to a framework that Trump and Xi would give a stamp of approval to.

“I can’t see how you get a deal when they are sitting down at most for a couple of hours,” Allgeier said.

Kudlow said the U.S. has had talks at “all levels” with China ahead of the summit. Treasury Secretary Steve Mnuchin and Commerce Secretary Wilbur Ross have visited China in the past several months, but foreign policy watchers remain skeptical that those trips produced any real progress.

It is more likely that Trump and Xi will announce a ceasefire in the trade war.

China could also offer to buy more U.S. goods in exchange for a halt to any new tariffs. Trump rejected a similar offer earlier this year, but the politics have changed since then.

A new Minneapolis Federal reserve report found more farmers are filing for bankruptcy as they feel the weight of the tariffs and low commodity prices. Fears of an escalation to the trade war have weighed on Wall Street. 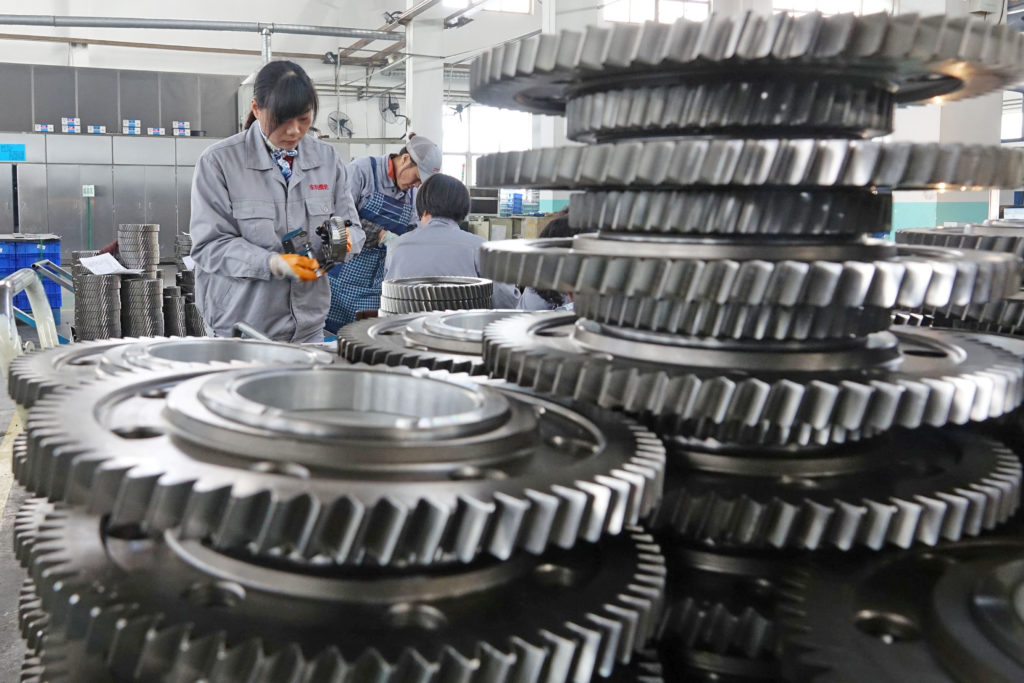 Workers inspect engine gears at a company under Dongbei Special Steel Group in China. The country’s manufacturing industry has taken a hit since the tariffs went into effect. Photo Courtesy: Reuters

China is also under pressure to make a deal as the tariffs squeeze its economy. The country’s third quarter GDP growth was the slowest its been since 2009 and on Friday, China reported its weakest manufacturing growth in two years as orders for new products slowed.

China’s former chief trade negotiator criticized the nation earlier this month for not thinking “deeply enough” about its response to U.S. tariffs. Long Yongtu told a conference earlier this month that Chinese officials need to better consider the economic, rather than the political, implications of the import taxes, especially on price-sensitive agricultural products.

“If you talk politics you will never reach a deal,” Long said, according to France24.

Any kind of deal, however small, could allow leaders to start broader negotiations on a host of issues. Agreeing on exactly what items would be on the table is key to any meaningful progress, Cutler said.

Even if both sides agree to start larger negotiating, that would only mark the start of a long road ahead, she added.

“Once people start following up on what is agreed to, that is when a lot of problems will come up,” Cutler said. “These negotiations are not going to be easy.”

Left: U.S. President Donald Trump and China's President Xi Jinping shake hands after making joint statements at the Great Hall of the People in Beijing on November 9, 2017. The two leaders will meet again for a dinner at the G20 summit in Buenos Aires. Photo by Damir Sagolj/Reuters.

Lack of Khashoggi intelligence forges ‘unusual alliance’ in the Senate