Amazon’s call for proposals for a second corporate headquarters earlier this year set off a national bidding war between cities from Albuquerque and Detroit to Atlanta and Boston.

The tech giant plans to invest $5 billion to build and run the new facility — which will be similar in size to its sprawling 40,000-employee Seattle headquarters — and has promised the project will create 50,000 high-paying jobs in the 10 to 15 years after the facility opens.

Amazon stopped soliciting bids on Oct. 19 and won’t announce a shortlist of contenders until next year, meaning the 238 cities that submitted proposals will have to wait for months to find out if they are selected. The decision will come down to the specific asks Amazon put forward in its request for proposals, as well as the incentive packages cities crafted to attract Amazon’s so-called HQ2.

So, how have contenders sought to entice Amazon — and how transformative could scoring the company’s HQ2 be?

What it takes to become the home of Amazon’s HQ2

The online retailer is on the hunt for a metropolitan area with more than 1 million people and a skilled labor pool. The company is prioritizing cities with strong university systems and other sites that can attract and retain new talent.

Amazon has asked for a business-friendly environment that can offer high “quality of life” and make it a place where people want to live, according to the company’s request for proposals. 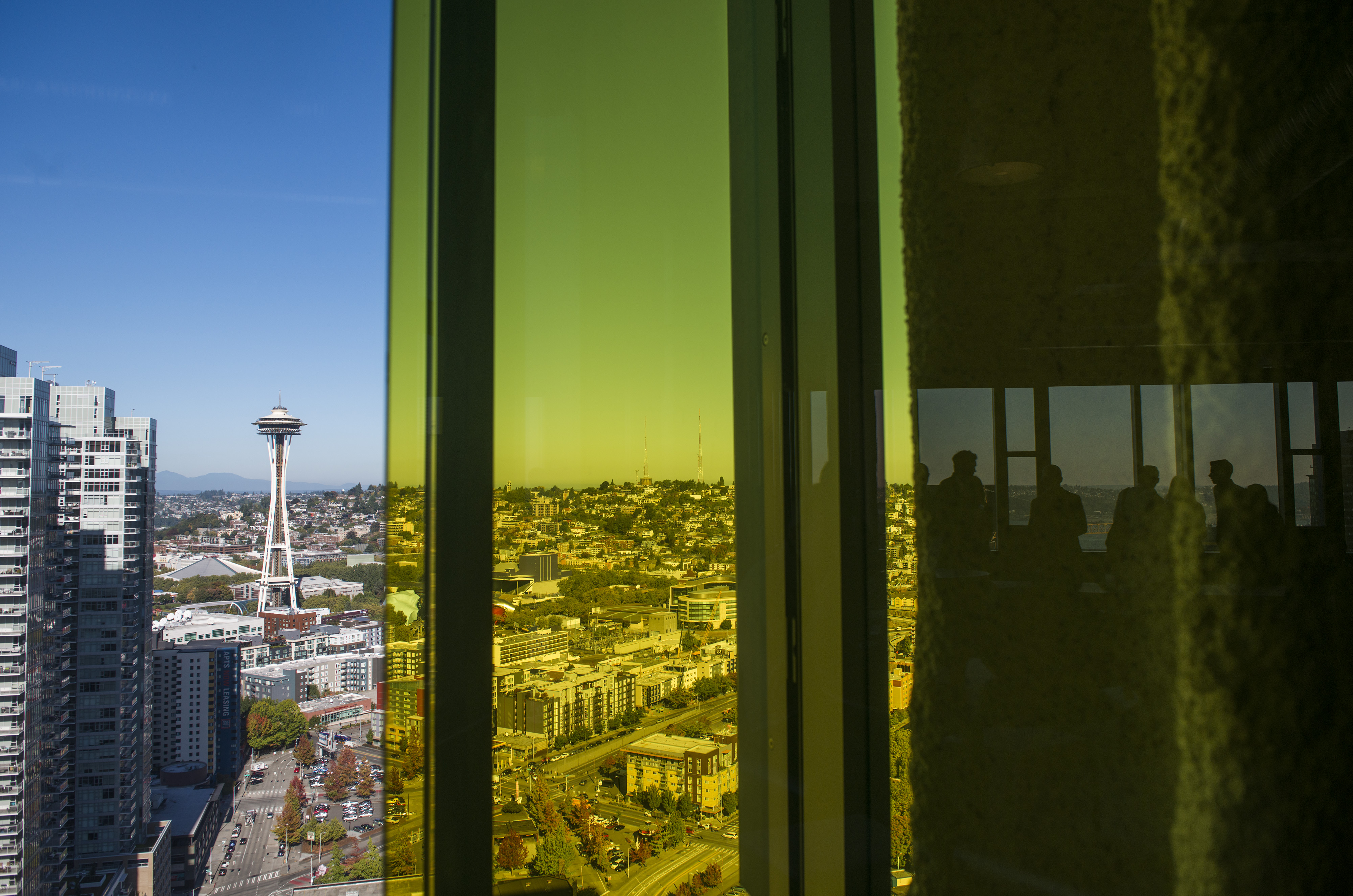 The Seattle Space Needle is seen in the city skyline from the Amazon.com Inc. offices after the company’s product reveal launch event in downtown Seattle, Washington, on Sept. 27, 2017. Photographer: Daniel Berman/Bloomberg via Getty Images

Among the other criteria is the availability of buildings or a site for brand-new construction with access to an international airport and mass transit. Another major consideration for Amazon will be incentives from state or local governments, including tax credits, relocation grants and fee reductions, that can, according to Amazon, “offset the initial capital outlay and ongoing operational costs.”

“There’s no one place that has all of these things,” Jed Kolko, the chief economist at the jobs site Indeed, told the PBS Newshour. “The places that are stronger on some of these dimensions maybe don’t rank as high in others.”

According to the Brookings Institution, the preference for a metro area with more than 1 million people immediately narrows down the list from 238 to roughly 50 cities. When factoring in other criteria, the institute estimated that only 20 metropolitan areas are truly in the running to score Amazon’s HQ2.

Here’s what cities can offer Amazon

Amazon will have to isolate a winning bid from the 238 proposals put forward by jurisdictions across 54 states.

Other cities and states have found alternative ways to lure the company. Stonecrest, a town outside Atlanta, voted to de-annex 345 acres of its land and said it would let Amazon name it after itself. Milwaukee has used its proximity to Chicago and its workforce as a selling point, according to Reuters. Dallas’ pitch featured optimized transportation, with plans for a high-speed bullet train that would transport passengers from Houston to the proposed Dallas headquarters in just 90 minutes. 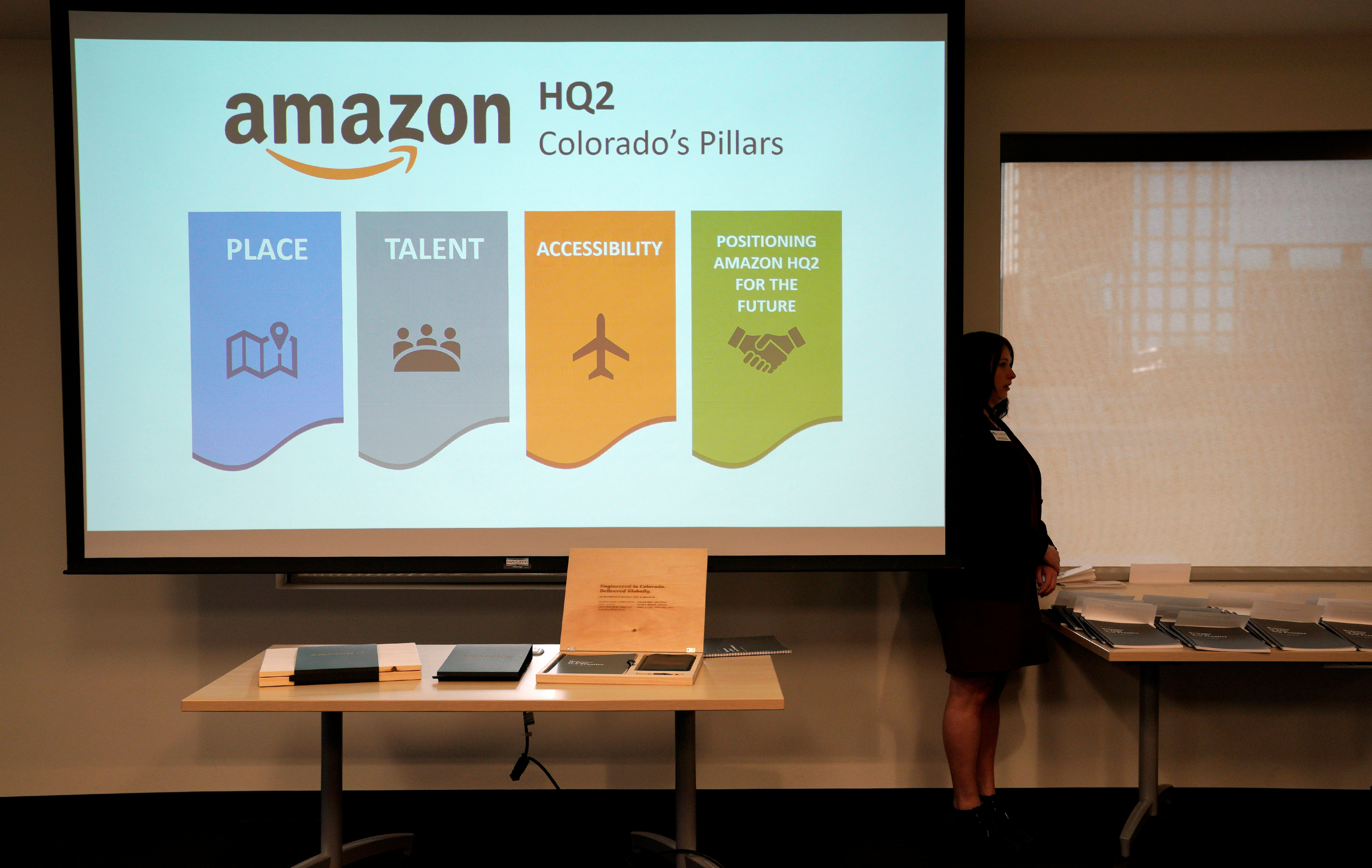 The Colorado proposal for the Amazon.com Inc’s $5 billion second headquarters is unveiled at a meeting in Denver, Colorado, on November 16, 2017. Photo by REUTERS/Rick Wilking

Some cities have already emerged as top contenders, at least to the experts and business analysts following the search process. Detroit, with its access to an international airport and affordable real estate, might be an attractive option for Amazon. Choosing Detroit and revitalizing its economy could also be a good public relations move for the company. But because Detroit’s slow job growth and dearth of skilled tech workers could be a strike against the city, which was excluded from the New York Times’ list of top contenders.

The Times named Denver a frontrunner, citing the city’s nearby universities and large tech talent pool. The city’s affordability and high concentration of tech start-ups is attracting college graduates and creating a culture that seems compatible with Amazon’s demands.

Other cities, such as Atlanta, Austin and Washington, D.C., are also among the top candidates according to Moody’s, Bloomberg and CityLab.

What impact would Amazon’s HQ2 have on its city?

“Whatever place becomes the second headquarters will be, at the minimum, changed and possibly transformed,” Kolko said.

But the impact will depend on the city and the nature of its proposal. For cities like Detroit that don’t meet all of Amazon’s criteria, landing the deal “could actually revitalize” the surrounding community, said Amy Liu, an expert on cities and metropolitan areas at the Brookings Institution.

“It would create net growth that wouldn’t have been there otherwise,” Liu added.

The impacts for cities with established tech sectors, such as Boston, would be different. Cities like Boston would only subsidize an overheated market by spending taxpayer dollars to lure Amazon, Liu said, and might be better served using that money elsewhere.

“So, the question is,” Liu said: “Why put $7 billion toward a company if it would have come into the market anyway, when that $7 billion could be used for other critical community investments like preserving affordable housing, expanding or upgrading infrastructure?”

As high-tech companies like Amazon cluster in urban areas in pursuit of a high-skilled technology workforce, those are the tradeoffs cities will have to consider.