How climate change is changing your insurance

As victims of the California wildfires begin to think about rebuilding their homes, advocates and policymakers are warning that natural disasters, made more frequent and destructive because of climate change, could make home insurance unaffordable and force more Americans to rely on government insurance programs that are already strained.

The Camp Fire — the worst wildfire in California’s history — has killed 88 people, burned more than 153,000 acres and destroyed 13,9572 homes. The fire added to a wildfire season that is already the most expensive on record with more than $11 billion in damages, according to the analytics firm CoreLogic. That surpasses the 2017 wildfire season, which caused $10 billion in damages. Six of the 10 most destructive California wildfires in history have occurred in the past four years.

Last year was the most costly year for all natural disasters on record.

The devastation is not limited to wildfires. Last year was the most costly year for all natural disasters on record. A total of 219 weather and climate events cost $1.5 trillion from 1980 to 2017, according to the National Oceanic and Atmospheric Administration.

The signs all point to more obstacles for for homeowners living in high risk areas or trying to rebuild following natural disasters like California’s Camp Fire, said Mike Kreidler, the Washington state insurance commissioner and the lead commissioner on climate for the National Association of Insurance Commissioners.

Homeowners “should be worried that the insurance companies are going to increasingly reluctant to stay in certain markets and charge affordable rates,” Kreidler said.

In fact, home insurance rates already increased more than 50 percent from 2005 to 2015, the year with the latest available data. The National Association of Insurance Commissioners attributes the increase to natural disasters, inflation, rising real estate values and construction costs.

Insurance companies typically base their models on what has happened in a particular region for the past few decades. That has historically served them well.

“The insurance industry is prepared to handle catastrophe,” said Janet Ruiz, the California representative for the Insurance Information Institute.

More sophisticated technology has made the models increasingly more precise, pinpointing risk factors to certain areas, Ruiz said. If one area is prone to wildfires, companies will typically insure more homes in a low-risk area to offset the potential costs.

But as climate change intensifies, fewer places are immune from natural disasters. Even inland areas that were once considered relatively safe are becoming more susceptible to flooding.

Climate change has changed the equation, making the past no longer indicative of the future, said Jason Thistlethwaite, an assistant professor at the University of Waterloo who studies insurance and climate change.

“If you are using historical models for your business, you are driving down the road by looking in the rearview mirror,” he said.

Insurance companies also have different ways of using the third-party assessments, Ruiz said. Some pay for assessments from multiple firms so they are not relying too heavily on any one model.

Insurance companies must typically get rate increases approved by state insurance agencies that are tasked with regulating insurance and protecting customers from exorbitant pricing.

North Carolina, for example, settled a legal dispute with the state’s rate bureau earlier this year, negotiating a proposed rate increase of 18.7 percent down to 4.8 percent. Texas policymakers are disputing over a 10 percent rate increase for windstorm and hail insurance on the Texas coast, which was hit by Hurricane Harvey last year.

But some economists argue that regulating rate increases can also keep insurance premiums artificially low. If, because of public pressure, policymakers reject rate increases that are justified by insurance models, that puts insurance companies at a greater risk of losing money.

In some cases, national insurance companies have left states altogether when providing insurance there was not profitable enough. 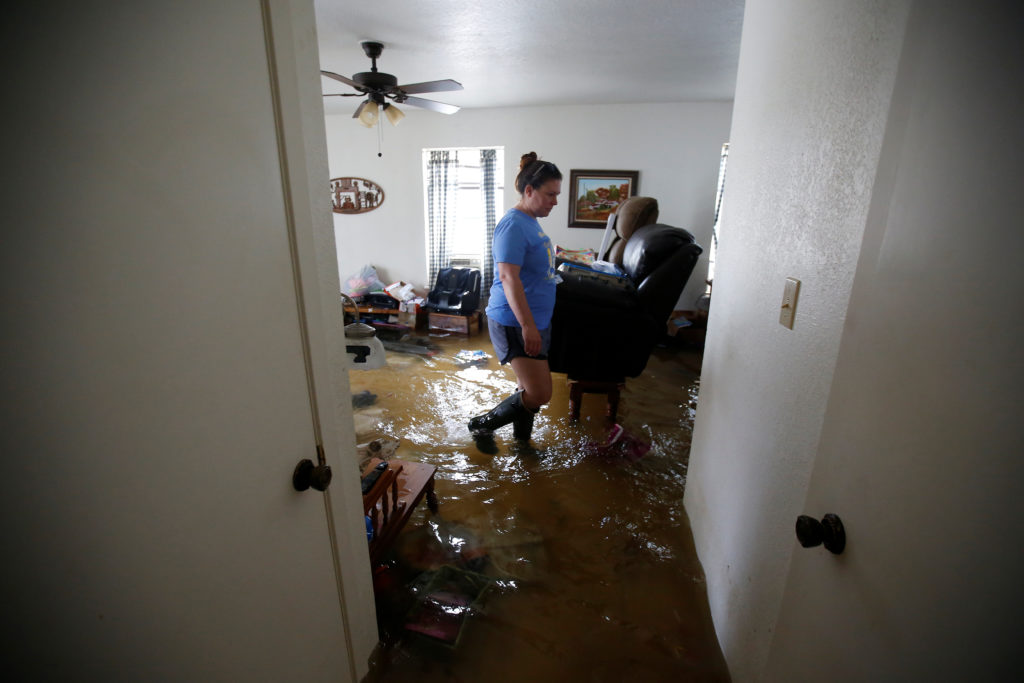 A woman wades though a flooded living room of a house on a farm after Tropical Storm Harvey in Orange, Texas on September 1, 2017. The National Flood Insurance Program paid out more than $8 billion in claims after the storm. Photo by Carlo Allegri/Reuters

Kreidler, the Washington state insurance commissioner, said people should look to Florida as a case study for what could happen when homeowners are left without options. Homeowners there were forced to join the state-backed insurer of last resort after private-insurance companies left the state following a series of hurricanes that hit Florida in 2004 and 2005.

Nationally, more property owners who cannot get private insurance for flooding are joining the National Flood Insurance Program. The federal program subsidized insurance premiums so heavily that it has borrowed $25 billion from the U.S. Treasury to pay out claims.

Congress has until the end of the month to reauthorize the program, a task it is loathe to do without reforms aimed at keeping it from becoming insolvent. Lawmakers could pass a stopgap measure to extend the deadline, as they have in the past, if they cannot come to an agreement.

Others look abroad for examples of possible solutions. Thistlethwaite recommends countries look to the United Kingdom, where regulators are requiring insurance companies to stress test their investments, much like banks are required to do in the U.S., as a way to ensure they can cover any potential losses.

Insurance companies are offering more discounts on premiums to property owners who take steps to minimize damage from a natural disaster. Often those discounts are mandated by state law.

Homeowners in Oklahoma who retrofit their properties to withstand tornadoes, for example, and residents in Florida who upgrade their homes to minimize hurricane damage are eligible for a reduced monthly insurance rate.

But it is a different story when it comes to fires. 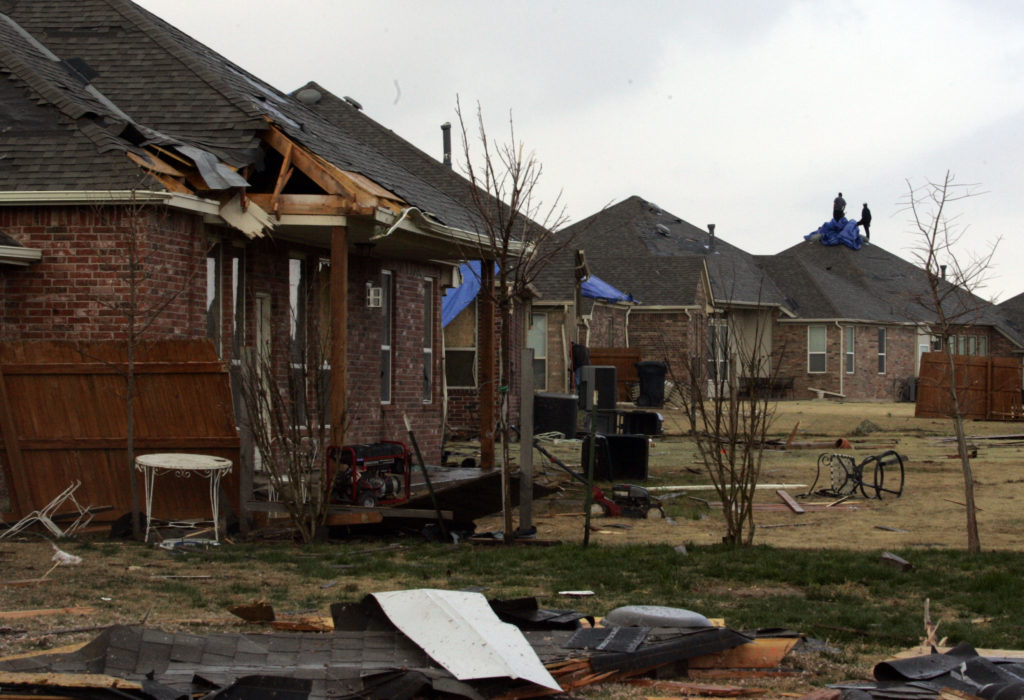 Workers can be seen in the distance as they cover the roof of a damaged home after a suspected tornado and heavy storms hit Edmond, Oklahoma in 2008. Insurers offer some discounts to homeowners who refit their homes to withstand tornado damage or other natural disasters. Photo by Mike Stone/Reuters

Amy Bach, the executive director of the insurance consumer advocacy group United Policyholders, said companies are still skeptical about whether fire mitigation efforts — such as creating open spaces around a house, or adding screens over attic vents to prevent embers from flying in — are effective.

“They are going to say you can do all you want, but if your neighbor doesn’t do their stuff, it’s going to burn your house down,” Bach said.

Some companies have joined FireWise, a campaign that encourages entire communities to minimize their fire risk. But to date, only one company, USAA, provides a discount on monthly premiums for residents of designated FireWise communities.

In California, homeowners won’t see massive rate increases after this year’s fire because the state requires insurers to spread out the costs over several years, but the rate increase will come eventually.

And homeowners are already paying the price of what California Gov. Jerry Brown has called the “new normal.” According to a California Department of Insurance report, insurance companies refused to renew more than 10,000 insurance policies for homes in high-risk areas in 2016, leaving many homeowners with few options.

Editor’s note: NOAA has recorded 219 events as of 2017, since it began keeping records in 1980. A previous version of this story incorrectly stated the National Oceanic and Atmospheric Administration recorded 219 weather and climate events in 2017.