How income inequality can make or break presidential elections

In “The Culture of Contentment” — first published in 1992 — the economist (and my father) John Kenneth Galbraith ventured that the broad middle classes created by the New Deal had voted for Ronald Reagan and the elder George Bush precisely because the compelling needs that had driven them to Franklin D. Roosevelt in the 1930s had been met. Conservatism, as a mass phenomenon, was a product of the policies it opposed.

The same will not be said of the 2016 election, which was the product of anger coming largely from the same working and middle-class strata that delivered the 1980 election to Reagan.

In 2016, the right turn was a product of conservatism itself: of the de-industrialization and de-unionization that began in the early ’80s, of free trade agreements begun under George H.W. Bush, of the massive inequality fostered by tax and spending cuts, and of the financial deregulation and collapse (and loss of home equity and retirement security) that came on in the administration of George W. Bush.

In 2016, Democrats were the target of anger because they were complicit. Two Democratic presidents, Bill Clinton and Barack Obama, had accepted many right-wing policies, from free trade to welfare reform. While leaning liberal on other matters, they had failed to act against the damage felt in Middle America, and, worse yet, had failed even to speak to the pain and anger that was developing.

Instead, the Democratic message two years ago was that “America was already great.” The party basked in the good news of an economic recovery measured on average. That the recovery was brutally uneven — favoring finance and technology, the coasts over the interior, the rich over the middle class — proved a fatal political fact.

That’s why today the relationship between political sentiment and measured economic inequalities is so important to understand, even though at first glance it’s counter-intuitive. For it is not in states where inequality rose the most that Donald Trump was most likely to prevail. In fact, the exact contrary is true.

The relationship between political sentiment and economic inequalities is so important to understand.

To check the relationship, we at the University of Texas Inequality Project first calculated annual estimates of pay inequalities for each state going back to 1969, giving us a complete data set not previously available (except once in 10 years, through the decennial census). We then calculated the change in inequalities from 1990 to 2014, and compared that measure to the outcome, state-by-state, of the 2016 election.

The striking result is that the 14 states (including the District of Columbia) with the largest increases in inequality over the quarter-century, without exception, voted for Clinton. The states with the smallest increases largely – not entirely – voted for Trump. Now, why was that?

The reason is that voters do not perceive inequalities directly, nor do they react to inequality at the state level. Rather, state-level inequalities measure the economic and political characteristics of a state.

States where inequality has risen sharply – like New York, New Jersey, California and Connecticut – tend to have rich cities where liberalism reigns, and large and rapidly growing low-income, minority and immigrant communities. This is why they are unequal. And yet, both branches of their political communities fall within the loyal circles of the Democratic Party.

Republican states, on the other hand, tend to be suburban and rural, not so rich in the cities, and with minority voting blocs that are either somewhat smaller, or kept from the polls by whatever means of voter suppression may be available, especially in this post-voting-rights era. 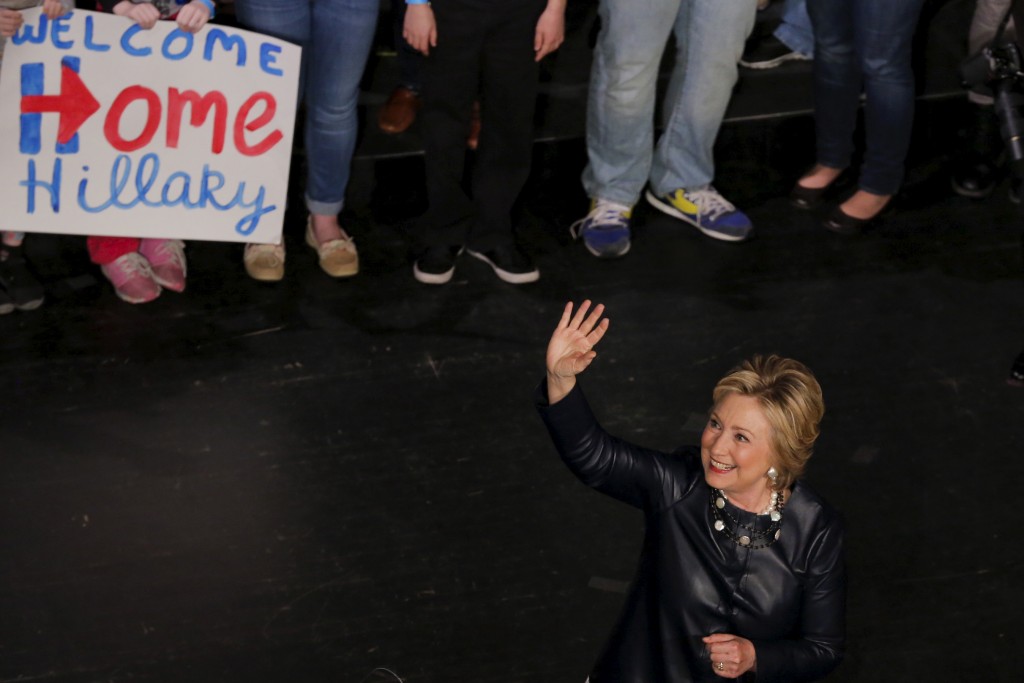 Hillary Clinton waves to attendees during a campaign rally at the Apollo Theater in Harlem, New York on March 30, 2016. Photo by Lucas Jackson/Reuters

Further, we can observe that the critical states won by Trump — Wisconsin, Michigan and Pennsylvania, as well as Ohio – are all states where industrial decay has both reduced the wealth of the great cities, and limited the growth of the minority voting populations.

These states were always divided relatively narrowly, and were often electoral battlegrounds. But in 2016 the balance shifted toward the Republicans, not because inequalities rose but because they hadn’t risen by enough.

Finally, we can observe that across the South and Southwest, from North Carolina to Georgia to Texas to Arizona, inequalities have been rising in states long safe for the Republicans. These states are experiencing their growth among relatively liberal urban professionals and among Hispanic and other immigrants. Both forces are tilting them toward the Democrats.

In 2016 in Texas, for example, Clinton received three percent more of the vote than had Obama in 2012. Harris County, which includes Houston and is the nation’s third largest county, swung strongly Democratic. The swing was not enough to put any Southern state in play; time will tell a different story.

So here’s the dilemma for the Democrats in 2020: Do they play to retrieve the upper Midwest, where the tide is slowly moving out? Or do they aim for the South, where it is slowly – perhaps too slowly – flowing in?

Either strategy might work, and either might fail. The economic platform suited to one region is not likely to be ideal for the other. It appears that the Democratic Party, which is so far still traumatized and preoccupied by Trump as a person, and divided internally, lacks even a minor capacity to choose.

And yet, a choice must be made – one on which the future of the country might depend.

Above: Trump campaign buttons on display outside of the Republican National Convention in Cleveland, Ohio on July 18, 2016. File photo by Lucas Jackson/Reuters

James K. Galbraith is the author of "Inequality: What Everyone Needs to Know." He teaches at the University of Texas at Austin and is the son of the economist John Kenneth Galbraith.