How taxing sugary drinks affects a community’s health and economy

Ever since Berkeley, California, implemented the nation’s first sugary drink tax in November 2014, paving the way for similar taxes across the country, supporters and opponents of the measures have debated how such a tax affects a community’s economy and health.

Now, a set of new studies is solidifying consensus that a so-called “sin tax” does in fact lead to changes in behavior, including reduced consumption of sugary drinks. But it also drives shopping away from cities that charge more for sugary drinks and into surrounding suburbs, an effect that could have consequences as more localities consider whether to tax the beverages.

Currently, seven cities tax sugary drinks, generally defined as beverages that contain a substantial amount of added sugar, such as sodas, energy drinks and juice drinks that are not 100 percent juice. States like Hawaii and Vermont have considered statewide taxes, though they’ve yet to pass them.

In recent years, supporters of such measures have pointed to reports that link the consumption of sugary drinks to diabetes and obesity. Now, supporters are using the newest set of studies, released last month in the National Bureau of Economic Research, to make an economic case for a sugary drink tax as well.

“Diabetes and obesity are all imposing a financial cost on society.”

“Diabetes and obesity are all imposing a financial cost on society,” John Cawley, the co-director of Cornell University’s Institute on Health Economics, Health Behavior and Disparities, said.

Diabetes cost the U.S. $327 billion in health care and lost productivity in 2017, according to the American Diabetes Association. Obesity cost $147 billion.

The tax, supporters say, helps prevent those diseases and reduce health costs down the road.

Still, the taxes are often unpopular and the retail and beverage industry have poured enormous resources into preventing and repealing drinks taxes.

The newest set of studies focused on Philadelphia, which implemented a beverage tax in January 2017, and Boulder, where a similar tax took effect in July of last year.

Philadelphia taxes both regular and diet sodas. Researchers, led by Cawley, found that Philadelphia’s $0.015 tax per ounce of sweetened beverage decreased adult consumption of regular soda by more than 10 times per month. Overall, residents drank about 30 percent fewer sugary drinks, researchers found, in line with a Drexel University study that predicted Philadelphians would drink about 40 percent fewer sugary drinks once the tax went into effect.

The research, however, showed only a slight reduction—equivalent to 23.6 calories per day—in Philadelphians’ overall sugar consumption. The reason for the slight decline is unclear, though researchers suspect people are replacing the taxed drinks with other high-calorie drinks or foods.

The researchers have not yet determined whether sugar consumption dropped similarly in Boulder.

The burden on low-income communities

Research also indicated that the tax is regressive, putting most of the financial burden on low-income individuals who are less likely to be able to afford the price increase on sodas and other beverages.

Studies focused on Berkeley and Philadelphia showed taxes are more likely to be passed on to consumers in low-income neighborhoods where residents do not have the option of shopping at stores outside of the city limits in order to avoid the tax. 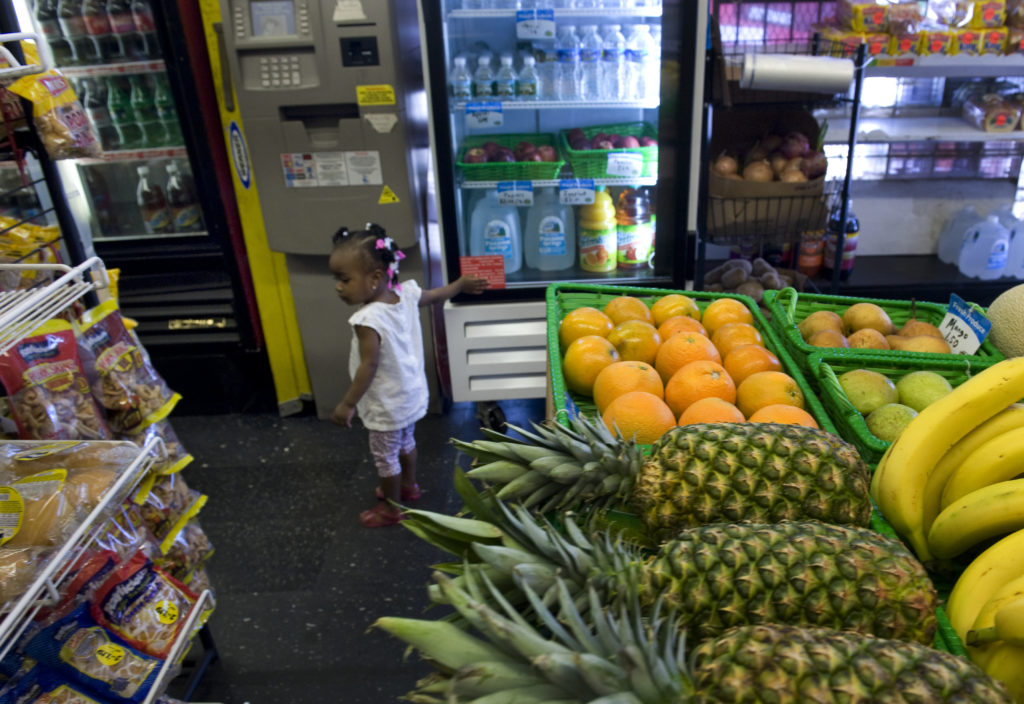 Owners of supermarkets and corner stores in Philadelphia’s low-income neighborhoods say the soda tax has hurt their bottom lines as customers choose to shop outside city limits to avoid the tax. Photo by Jahi Chikwendiu/The Washington Post via Getty Images

Jeff Brown, who owns 13 supermarkets in the Philadelphia area including in low-income neighborhoods that used to be food deserts, said stores in the city that have to impose the tax are now at risk. More people are choosing to shop in the suburbs to avoid the beverage tax and end up buying the rest of their groceries there, too, which means fewer shoppers in the city.

“It’s so hard for a food desert store to succeed,” Brown said. “I can almost guarantee you they are going to shut down because they are losing money now.”

Research shows soda taxes put most of the financial burden on low-income individuals.

“As far as job loss and business deterioration goes, I don’t see it,” he said. “They are opening up supermarkets left and right.”

If store owners like Brown were really worried about profits, they could decide not to pass on the taxes to consumers, Kenney said. Kenney also blames soda companies for targeting ads to poor neighborhoods in the first place.

Some cities, such as Boulder, do not have any other major cities nearby and don’t have to worry about cross-border shopping. But most large cities seeking to implement a beverage tax would face this problem, the studies show.

What do the beverage taxes fund?

The other side of the debate focuses on how revenue from sugary drinks taxes are being used.

In Illinois’ Cook County, the tax was used to cover a multi-million budget shortfall. That, combined with a poor rollout, made the public sour quickly on the tax. The tax was implemented last July, but after public backlash it was repealed five months later.

“It was laughable that this had anything to do with health, it had everything to do with revenue,” said David Goldenberg, a spokesperson for Can the Tax Coalition, a group that opposed the measure.

Arizona and Michigan have both passed a ban on sugary drinks taxes in the last two years after grocery stores warned that bans at the city and county level could lead to job loss and would be bad for the states’ economies.

In Philadelphia, city officials have said the tax was implemented primarily to fund pre-K, build libraries and improve public parks. The health effects are a secondary benefit. But in many other cities, including Boulder, at least some of the tax revenue has been specifically earmarked for health initiatives.

“By investing the revenues form these taxes back into the communities that are most in need, we know that the taxes aren’t regressive,” said Rachel Arndt, the healthy living coordinator for Boulder Public Health.

But, Arndt said, Boulder still has significant health disparities it needs to address. Arndt said she’s seen first-hand the benefits of the initiatives funded by the sugary drinks tax.

“People can finally afford food for their families. Kids are now able to do a competitive sport or participate in city programs where they didn’t have the option to before,” she said.

California voters will decide in 2020 whether to overturn a ban on sugary drinks taxes. The ban was implemented after four California cities—Albany, Berkeley, Oakland and San Francisco—passed the taxes in the past four years.

Voters in the state of Washington will vote on a similar ban during the General Election. Initiative 1634 would ban any local governments from adding a tax to groceries, including sodas.

This November, voters in Boulder, Colorado, will decide whether to scale back the sugary drink tax. The tax is generating millions of more dollars than originally estimated, so residents now have the opportunity to decide whether to let the city keep the money or reduce the tax rate. 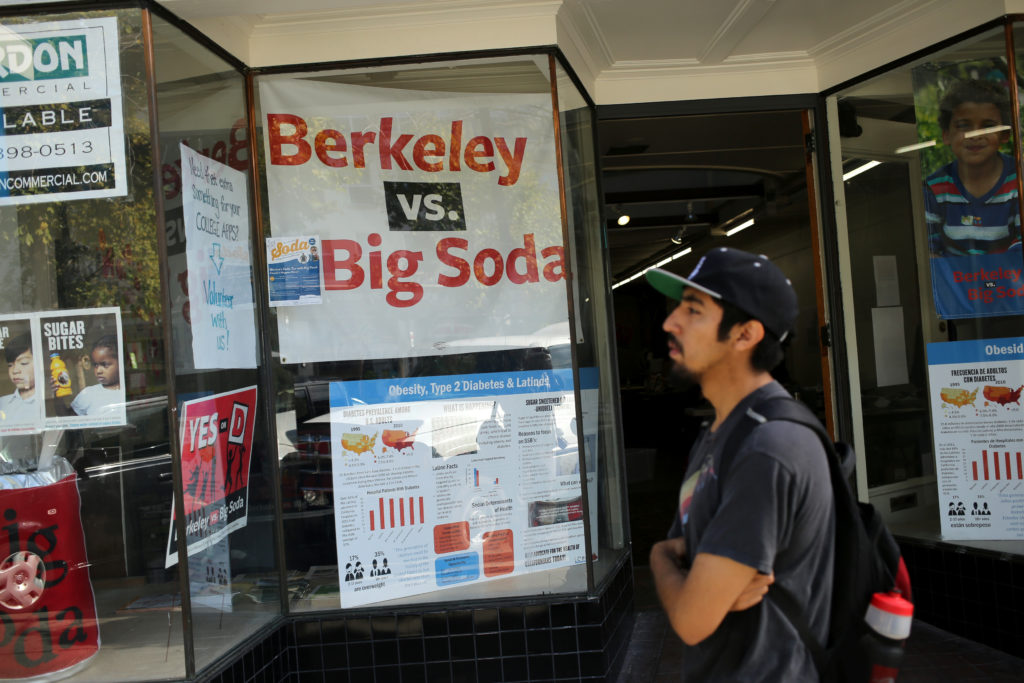 Berkeley, California was the first U.S. city to pass a tax on sugary drinks in 2014. Photo by Robert Galbraith/Reuters

Supporters of the taxes say the taxes should be broadened, not scaled back.

“As more and more localities pass the tax, our piecemeal approach is a challenge,” said Hillary Caron, the senior policy associate for the Center for Science in the Public Interest, a public health advocacy group. “We need it to cover whole states or the whole country to have the maximum impact.”

Countries like the United Kingdom and Mexico have implemented nationwide soda taxes. In the UK, companies have responded by creating new beverages that have fewer added sugars.

The American Beverage Association argues companies are already doing that in the U.S. without widespread taxes. The group has also argued that measuring how many fewer sodas a person drinks is counterproductive if people are not consuming substantially fewer calories overall.

“We have been trying to educate consumers as much as possible about what is in our products and help them to make balanced decisions on our products,” said William Dermody, a spokesman for the industry group.

Correction: This story has been updated to indicate that Boulder voters in November will decide whether to scale back the sugary drink tax, not repeal it.

Left: Coca-cola soda is shown on display in Compton, California. California recently banned any new taxes on sugary drinks. Voters will decide whether to overturn that law in 2020. Photo by Mike Blake/Reuters

Fed Chair Jay Powell: U.S. may be in a different era for workers’ wages despite economic gains