How will the tax bill impact health care? 5 experts weigh in

As House and Senate negotiators put the finishing touches on their tax plan, one thing is clear: the legislation will likely have a big impact on health care. The tax bill could repeal the individual mandate — a centerpiece of the Affordable Care Act — and could also trigger cuts in Medicaid and Medicare funding down the line. We reached out to economists, health care analysts and other experts for answers to key questions on the bill’s impact on health policy:

RICHARD FRANK, Professor of health economics at the Harvard Kennedy School — The evidence that exists suggests that in the near term, the individual health insurance market would experience further disruptions. The Congressional Budget Office estimates a reduction in the insured population by 4 million people in 2019, and 13 million by 2027. The CBO’s estimate of a 10 percent increase in premiums [if the mandate is repealed] is probably the best estimate of the immediate effect on premiums.

LANHEE CHEN, Research fellow at the Hoover Institution — Much of the impact may be blunted if legislation is passed to stabilize markets by authorizing the payment of cost-sharing reductions and funding state reinsurance arrangements. Individual health insurance markets were unstable before the ACA, and much of that instability has remained, due in no small part to uneven enforcement of the law’s individual mandate over the last several years. Even with the individual mandate, we have seen significant year-over-year premium increases in many parts of the country. So, it’s not clear to me that repealing the individual mandate will cause individual health insurance markets to collapse or be markedly worse across-the-board.

ANDY SLAVITT, Former Acting Administrator for the Centers for Medicare and Medicaid Services under President Barack Obama — The entire purpose of repealing the individual mandate as part of the tax bill is to cut coverage from low-income people to pay for corporate tax cuts. And that’s exactly what it would do. The most immediate effects would be to raise premiums. In 2017, there was rough parity in the cost of employer-based and individual insurance. For middle class families, the impact of not paying cost sharing reductions and ending the mandate would effectively make individual insurance unaffordable for middle class families who don’t get subsidies.

JANET CURRIE, Chair of the Department of Economics at Princeton University, and co-director of the Center for Health and Wellbeing — We do not know how many people are purchasing health insurance only because of the mandate. If there are significant numbers, and if they are predominantly young and healthy, then having them leave the pool would drive up costs for insurers, which in turn would drive up premiums further.

AVIK ROY, President of the Foundation for Research and Equal Opportunity: — Very little. Tens of millions of Americans have chosen not to buy Obamacare-sponsored insurance, despite the individual mandate, because the law’s plethora of insurance regulations have made insurance unaffordable for many, despite the generous subsidies that Obamacare offers to those near the poverty line. 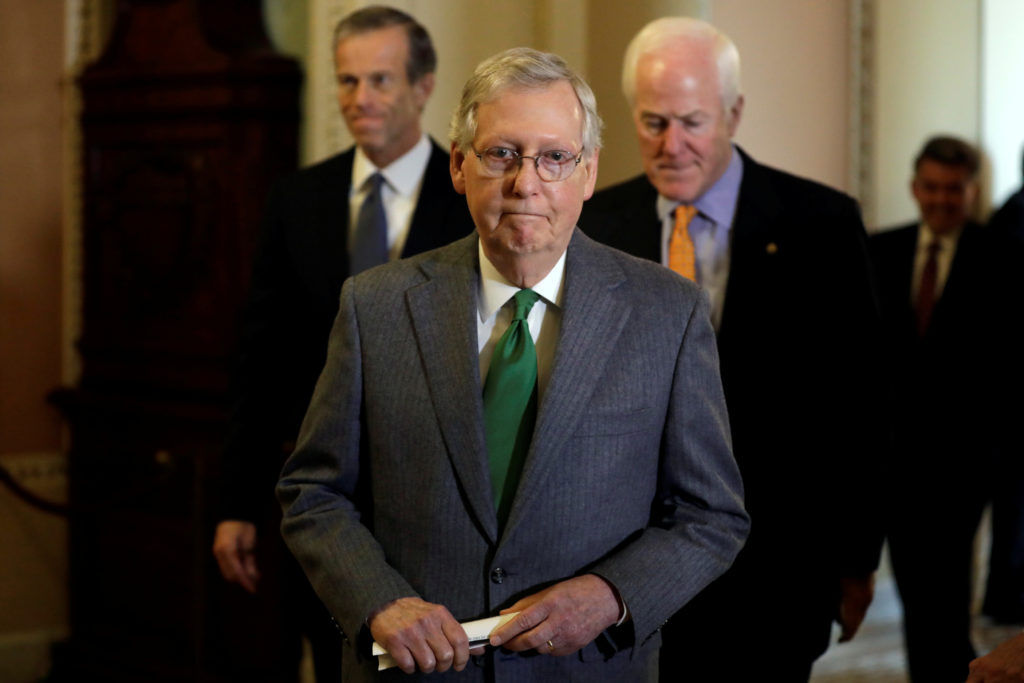 Senate Majority Leader Mitch McConnell, pictured on Capitol Hill on Dec. 12, 2017. House and Senate Republicans are finalizing the details of a tax plan this week. Photo by REUTERS/Yuri Gripas

Has the mandate been effective in increasing coverage and lowering overall costs?

RICHARD FRANK: The evidence that a mandate brings in a younger and healthier population is quite strong. The Massachusetts experience [of the state expanding health coverage] is informative, showing that people with incomes below the level that is subject to the mandate increased their participation in Medicaid.

LANHEE CHEN: Not particularly. First, the economic penalties associated with violating the mandate have, in many situations, been smaller than the cost of coverage. Second, the ACA’s statutory exceptions from the individual mandate, as well as weak enforcement of the mandate by the Obama Administration, have made it far less effective than the architects of the law hoped. Finally, to the extent there have been coverage gains, they have generally not been compelled by the individual mandate. The mandate hasn’t been particularly effective at lowering costs either.

ANDY SLAVITT: The mandate has been effective, but it is a fairly weak mandate, so not as effective as it could be. People misunderstand what the mandate does. If you look at the CBO analysis, it shows millions of people lose Medicaid coverage. Why? Because the idea of personal responsibility is to draw people to take care of themselves and review their options. And once they do, many people learn they qualify for Medicaid. Many more qualify for tax subsidies.

AVIK ROY: No. Obamacare’s “three-legged stool” of the individual mandate, premium subsidies, and premium-increasing regulations only works if the three legs of the stool are of equal length. To abuse the metaphor: the law’s regulations are the longest leg; the subsidies are of medium length; and the mandate is a short leg with small penalties and numerous loopholes. Indirectly, the mandate is responsible for increasing overall costs, because the idea that a mandate would force everyone back into the system bailed legislators out of the responsibility for ensuring that younger and healthier individuals could buy affordable coverage under Obamacare.

If Republicans decide to fund the Affordable Care Act’s cost-sharing subsidies (the Murray-Alexander bill), would that offset the impact of repealing the mandate?

LANHEE CHEN: This will help to stabilize markets, in part because the most significant take-up of coverage on the marketplaces has been among those Americans who have been heavily subsidized by the ACA. Funding the cost-sharing reductions, in particular, will help to ensure Americans making less than 250 percent of the federal poverty line remain enrolled in marketplace coverage. If Congress passes legislation that helps to fund state reinsurance provisions, this will help to stabilize the marketplace as well. Whether these legislative solutions will fully offset the impact of repealing the individual mandate remains to be seen.

ANDY SLAVITT: Not in the least. The benefits of Murray-Alexander would have been real if Congress had acted in a timely fashion — but even then nothing approaching the effect of taking away $330 billion in subsidies for 13 million people. Senator Murray was correct when she said it would be the equivalent of putting out a fire with penicillin. At this point, passing Murray and Alexander’s bill would not affect premiums at all for 2018, and a case can be made that they would raise premiums on more people than they would help for 2019.

JANET CURRIE: I think passage of the Murray-Alexander bill would be extremely helpful. It would offset some of the destabilizing effect of repealing the mandate. But more important, it would signal a much more constructive and bipartisan approach to the problems in the health care system. 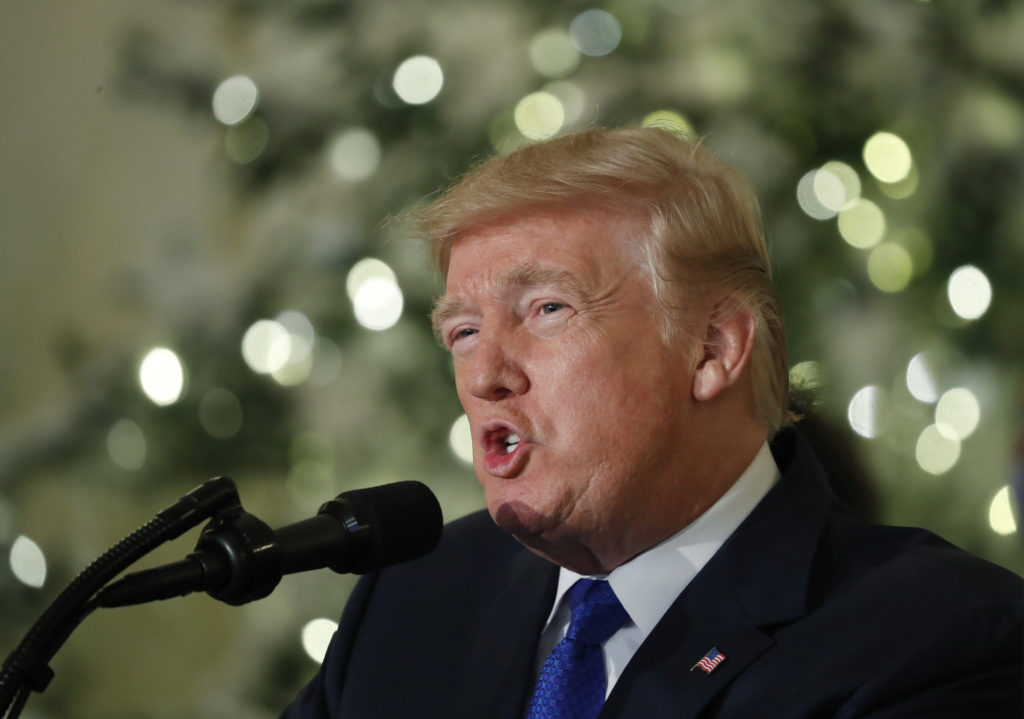 President Donald Trump delivers a speech on tax reform legislation at the White House on Dec. 13, 2017. Photo by REUTERS/Kevin Lamarque

Overall, the tax plan would reduce the government’s role in health care (and potentially trigger future cuts to Medicaid and Medicare). How would this approach impact the economy?

RICHARD FRANK: The Bureau of Labor Statistics has projected that from 2016 to 2026, the economy would add 11.5 million jobs. Four million of those were projected for the health sector, or 35 percent. If the savings from eliminating the mandate (more than $300 billion) are coupled with the expected cuts in Medicare to attend to the deficit, then one should expect retrenchments in health care and reduced job growth.

LANHEE CHEN: I don’t know that it’s fair to conclude, as a general matter, that the tax plan will reduce the government’s role in health care. But, putting that aside for the moment, I believe the tax bill will result in other positive gains for the economy. A lower corporate tax rate, and immediate expensing of capital expenditures, will stimulate job creation and wage growth. Many taxpayers will benefit from marginal tax rate reductions, while middle-class taxpayers in particular will benefit from a doubling of the standard deduction.

JANET CURRIE: This is by far the most important potential impact of the tax bill on the health care system. A $1.5 trillion (or larger) deficit will necessitate spending cuts. And cutting large social programs like Medicare and Medicaid using across the board cuts is the absolute worst way to do it. Expanding Medicaid to low-income women and children during the ‘90s and 2000s reduced mortality and increased children’s future education, employment, and earnings. There were especially large gains for African-American children. Rolling back these gains should be unthinkable, but sadly it seems like it will shortly be on the table.

AVIK ROY: Other than the individual mandate repeal, the tax plan would have no effect on the government’s role in health care. Approximately half of all health spending in the U.S. — $1.5 trillion a year — is government spending, and that doesn’t even account for the value of the exclusion from taxation of employer-sponsored insurance, which is another $400 billion or so. By comparison, the entire military budget of the U.S. is around $800 billion a year.