Employers added 209,000 jobs in July, continuing a long trend of substantial job growth and pushing the unemployment rate down to 4.3 percent.

Economists had a hard time finding anything bad in July’s jobs report.

“Nothing much to complain about,” economist Aparna Mathur at the conservative American Enterprise Institute said, noting that job gains beat expectations.

“Everyone expects [job growth] to slow, but it hasn’t slowed much,” Dean Baker, co-director of the left-leaning Center for Economic and Policy Research, said.

And on Twitter, economist Justin Wolfers warned against listening to anyone disappointed by this jobs report:

The only folks disappointed by this jobs report are politicos looking for talking points. It simply continues trends evident for years now.

Did we close the jobs gap?

Since 2010, the Hamilton Project at the Brookings Institution has calculated the jobs gap, defined as “the number of jobs that the U.S. economy needs to create in order to return to pre-recession employment levels while also absorbing the people who enter the potential labor force each month.”

With this jobs report, the economy has closed the jobs gap, said Ryan Nunn, the policy director at the Hamilton Project.

With this jobs report, the economy has closed the jobs gap.

If you’re skeptical, you’re not the only one. Baker questions whether the economy’s health is where it was in 2006 and 2007, pointing to how many workers between the ages of  25 and 54 are not in the workforce. “The employment rate for prime-age workers is still below the recession level,” he said.

And to be sure, the Hamilton Project also notes that the fact that the jobs gap closed “does not mean that the labor market scars of the Great Recession are entirely healed.”

“We think of the jobs gap as one important measure of labor market health, but it’s just one measure. There are other economic indicators that suggest there still may be slack,” Nunn added. He also pointed to a report released today that shows how uneven the recovery has been by state, gender, education and race. 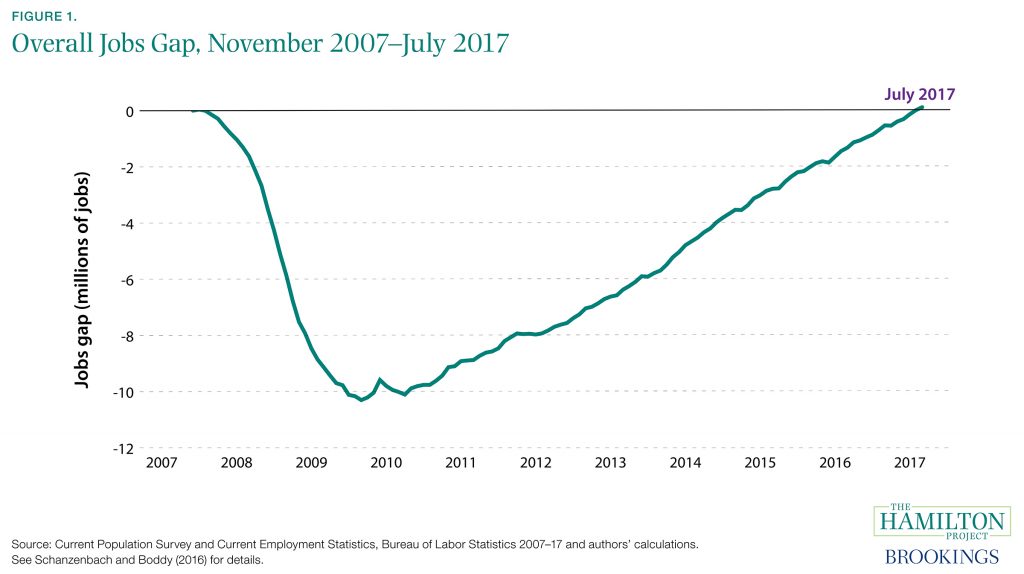 Where was job growth?

Job growth was mostly in food services, professional and business services and health care, while construction and manufacturing saw little growth. It’s a trend that we’ve been seeing for years.

Growth in the service industry and food and beverages “suggests the demand is for a lot of the low-income workers who are now getting jobs,” Mathur said.

In an email to the PBS NewsHour, economist Jed Kolko of Indeed.com noted that the low-wage industry job growth is “helping the least-educated Americans get back to work. The recovery is now strong and long enough to lift many of the people hurt most by the recession — except in manufacturing, which continues to lag overall jobs growth.”

That’s one way to look at it. Another, says our economics correspondent Paul Solman, is that the “hourglass economy” trend of the past 30 years or so shows no signs of slowing, with jobs being added disproportionately at the top and bottom of the economy, not in the middle.

The “hourglass economy” trend of the past 30 years or so shows no signs of slowing, with jobs being added disproportionately at the top and bottom of the economy, not in the middle.

The “death of retail” narrative would appear to jibe with that analysis. General merchandise stores may have gained 4,600 jobs in the past month, but they’ve lost 36,000 in the past year. And “clothing and clothing accessories stores” seem to have dropped 10,000 jobs in July. We never put too much stock in one month’s numbers, but clothing retail jobs are down over the past year as well.

So are we finally witnessing the death of bricks-and-mortar retailing? Or is there more of a transformation in progress? Two upcoming Making Sen$e stories will explore the issue, starting in a couple of weeks. And who works these often low-wage jobs? People already at a disadvantage in the workforce: Women make up 60 percent of department store jobs, while people of color make up 36 percent.

Economist Betsey Stevenson looked at the sectors with job growth through a gendered lens, commenting on Twitter, “The problem isn’t that we aren’t creating jobs, it’s that job growth is almost all in services … Men want manufacturing jobs.”

Making Sen$e has reported on this disconnect, looking at the growth of jobs in education and health care and exploring why men aren’t pursuing jobs in those sectors. Stigma, Stevenson wrote in a Bloomberg op-ed, “Manly Men Need to Do More Girly Jobs,” on which she elaborated for us. But economist Teresa Ghilarducci said low pay is the main reason.

Was there wage growth in July?

Speaking of pay, average hourly earnings rose 9 cents in July. Over the year, wages have risen 2.5 percent, while inflation has been 2.38 percent over the last 12 months.

“We are see wage gains rising faster than inflation for all workers,” conservative Aparna Mathur said. “That tells me that demand for workers at the bottom of the income distribution is going up, and if you combine it with the good GDP numbers coming out, I think all of that suggests that employers are ready to hire again.”

Dean Baker, on the other hand, isn’t so optimistic about wage growth of .12 percent per year.

“I like to take the three-month average — so May, June and July — and that growth is just 2.2 percent, annualized rate,” Baker said. “That’s not accelerating.”

Ideally, he added, wage gains would be a full percentage point above the Federal Reserve’s inflation target, meaning wage gains around 3.2 percent.

But for wages to rise, we need to keep “the Fed from slamming on the brakes too soon,” Baker said. “No more [interest rate] hikes for the year.”

What does the Solman Scale U-7 say?

Our Solman Scale U-7, the broadest measure of underemployment and unemployment, which includes the officially unemployed, involuntary part-time workers and anyone who wants a job no matter how long it’s been since they last looked, also ticked down from 10.7 percent to 10.6 percent. To put this in perspective, when we first began calculating the U-7 in August of 2011, it was 18.3 percent.

“I think there are a lot of people out there who want to work who aren’t in the labor force at the moment.”

Aparna Mathur sees this as a very positive development: “There’s a decline in involuntary part-time workers, which suggests to me they are finding full-time jobs or finding jobs more satisfying on the wage front so they don’t classify themselves as involuntary part time workers.”

More workers are coming back into the workforce as well.

“There is a lot more optimism about being able to match with an employer,” Mathur said.

But Baker, pointing to the low labor force participation rate for both men and women, disagrees. “I think there are a lot of people out there who want to work who aren’t in the labor force at the moment.”

Left: Growth in the service industry and food and beverages, “suggests the demand is for a lot of the low-income workers who are now getting jobs,” Mathur said. Photo by Patrick T. Fallon/Reuters