In a matter of only a few years, the ridesharing apps Uber and Lyft have gone from novel ideas to core pieces of the transportation fabric in cities around the globe.

Now, both companies are going public and offering shares on the stock market. But why now?

What are Lyft and Uber offering?

Lyft announced its initial public offering price Thursday — at $72 per share. Its stock is being listed on the NASDAQ under the ticker symbol LYFT.

Lyft plans to offer 32.5 million shares of its company. Some of the stocks will be reserved for the company’s cofounders. The offering is raising $2.34 billion for the company and sets its value at $24.3 billion.

Although Lyft’s value could spike later on, its initial valuation is still much smaller than Uber, which is privately valued at $72 billion and is expected to go public next month.

Who owns the market?

Uber and Lyft have been in fierce competition for market share in the domestic ride hailing business, while also investing in new lines of businesses, including food delivery and autonomous vehicles.

Estimates on who controls the market vary. Lyft claims it now accounts or 35 percent of all rides taken. The latest estimate from Second Measure, a firm that analyzes purchases on credit and debit cards, puts that number at closer to 28.9 percent — three points higher than last year. Uber, according to Second Measure, has approximately 69.2 percent of the market. The company has increasingly relied on its food delivery business, UberEATS, to make up for slowing growth in its traditional ridesharing business.

In recent months, both companies have been offering steep discounts to their customers in an attempt to corner more of the market before they go public.

The company with the largest market share could be seen as having the best potential for investors. That will be Uber, for now, but Lyft is hoping it can show its market share is rising and could eventually surpass Uber’s.

Investment money has flowed into companies like Uber and Lyft, which have the potential to grow substantially despite high upfront costs.

Since the two ridesharing giants were founded — Uber in 2009 and Lyft in 2012 — they have taken in billions of dollars in capital from investors.

At this point, said Semil Shah, a partner at Lightspeed Venture Partners, Uber and Lyft have probably “tapped out” most of the late-stage investment firms that can supply the billions of dollars they’re seeking to cover debts and expand into new lines of business such as scooter and bike rentals. Were they to delay going public and return to existing investors for additional money, it might come with onerous strings attached, such as discounted shares in an eventual public offering.

Both companies have been offering steep discounts to their customers in an attempt to corner more of the market before they go public.

“When you have investors for 10 years, at some point you have to return the money to them,” said Santosh Rao, the head of research at Manhattan Venture Partners.

Uber has in the past allowed a limited few early shareholders to sell portions of their holdings to new investors. But even still they’ve been prevented from offloading as much as they’d like. Tech companies are notorious for maintaining a tight grip on ownership in their early days for fear of losing the freedom to make risky bets.

By heading for the stock market, existing investors get an opportunity to cash out, while the ridesharing giants gain access to a new pool of investors.

But filing paperwork for an offering doesn’t necessarily indicate either company has an urgent need to raise money. In the third quarter of 2018, Uber, which releases basic financial statements even though federal law does not require privately-held companies to do so, reported that it ended the year with $7.3 billion left in the bank.

Instead, experts said Uber and Lyft have likely looked at recent tumult in the global economy and decided they need to be prepared to go public in case the U.S. enters a recession in the next few years. A recession would make it more difficult to raise capital from investors and get a high price on their IPO. 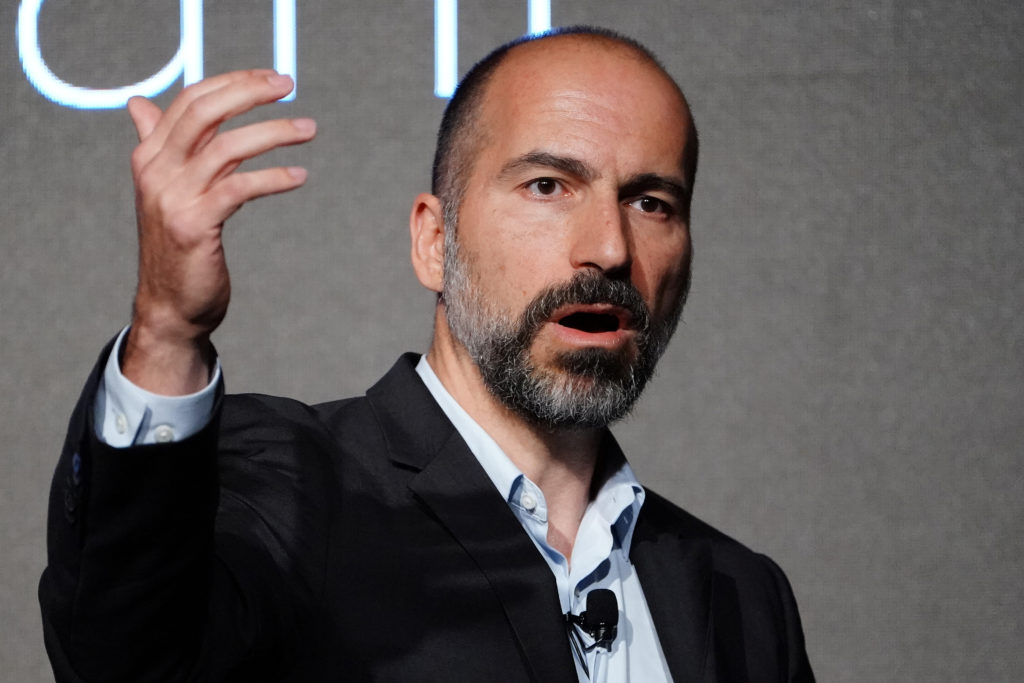 Dara Khosrowshahi, Uber’s CEO, on stage during an event in New York City, on September 5, 2018. Uber has branched out to provide into food delivery and other services. File photo by REUTERS/Carlo Allegri

“We’ve had the longest running bull market,” Rao said — that is, a general trend of stocks rising. “So I’m sure at the back of their minds they’re saying, ‘You know, let’s not wait until this whole ride ends and there’s a lull or a slowdown.’”

Other darlings of the tech industry, such as Snap Inc., which owns Snapchat, have gone public on a similar message: that they need to burn cash at a fast pace if they want to grow. But many of those companies struggled once they tried to turn a profit. Snap began trading in 2017 at an opening price of $17 per share. It is now trading at about $11.

Still, Rao stressed that the fundamentals of the U.S. economy remain solid, and both Uber and Lyft are strong enough to withstand scrutiny by public investors.

“There’s not much else to prove on the private side,” he adds. “I think it’s the right time to get out.”

Why the companies are going public around the same time

Market conditions aside, the fact that the rivals filed their paperwork within days of one another is likely not a coincidence.

Shah, the partner at Lightspeed, said the two watch each other’s movements closely and act accordingly.

Going public can serve as a marketing tool for Uber — a signal to investors and the public that they’ve moved on from their tumultuous past.

Uber has been making efforts to improve its reputation since Khosrowshahi took over as CEO in 2017, following the ouster of Travis Kalanick. Kalanick was plagued by accusations that he fostered a culture of winning at all costs, even if that meant flouting the rule of law in cities around the world. Uber has been the subject of criminal investigations into its conduct, a problem that Lyft has largely avoided.

Shah said going public can serve as a marketing tool for Uber — a signal to investors and the public that they’ve moved on from their tumultuous past and are ready for greater scrutiny.

“Uber had its own self-inflicted wounds and stumbles,” Rao said. “It’s coming back now. They’ve straightened out their management, they’ve got the culture going in the right direction. They’d probably like the public to see that.”

Can the companies become profitable?

In 2018, Lyft brought in about $2 billion in revenue, according to a Securities and Exchange Commission filing, and Uber processed about $48 billion in sales each year. But neither company is profitable.

Uber has chalked that up to its investment in new lines of business, like food delivery and the development of self-driving vehicles, that it hopes could eventually generate new revenue streams.

Many experts think both companies have fundamentally sound business models and could become profitable in the near future if they pare back further investments in growth.

That’s the primary thing investors will be watching for after the companies go public, Rao said: a consistent growth in ridership along with falling expenses. If their core businesses are strong, investors will be able to stomach the losses as they invest in new products — at least for a few years, as Uber and Lyft, once they’re publicly traded, continue vying for ridesharing dominance.

Both companies have the same long term goal, Rao said: to be the last one standing. “That’s basically what this business is,” he said.

Left: Lyft has filed paperwork for its initial public offering that is expected to value the company at up to $25 billion. Uber is also planning to go public in the coming weeks. (File photo by Justin Sullivan/Getty Images)