The economics week in review with Nobel laureate Robert Solow

An esteemed Harvard economist once said that if the earth were threatened with an alien invasion, he would want Robert Solow to chair the international commission on how to deal with it. What he meant: Solow was the wisest, most sensible person he’d ever met. 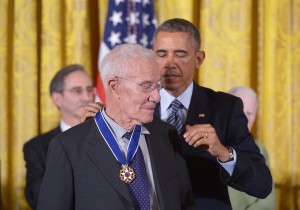 Robert Solow is also an economist who won the Nobel Prize in economics back in 1987 for his “Solow growth model,” a staple of the economics literature. An MIT emeritus professor, he’s semi-retired, but still one of the most acute minds I’ve ever encountered. So on Friday, I visited him at his condo in Lexington, Mass., to record the first of what I hope will be a series of regular conversations on the week’s news in business and economics. This is the first of them.