The world’s rich are parking their money in cities. Where to next?

UBS, the Swiss financial services firm, has come out with its annual report on the “cost of living in cities around the world,” and the data showing where real estate investors are spending their money is striking.

Here’s the key chart, which shows how many years it would take a worker earning an average income to buy a 646-square-foot (60-square-meter) apartment there: 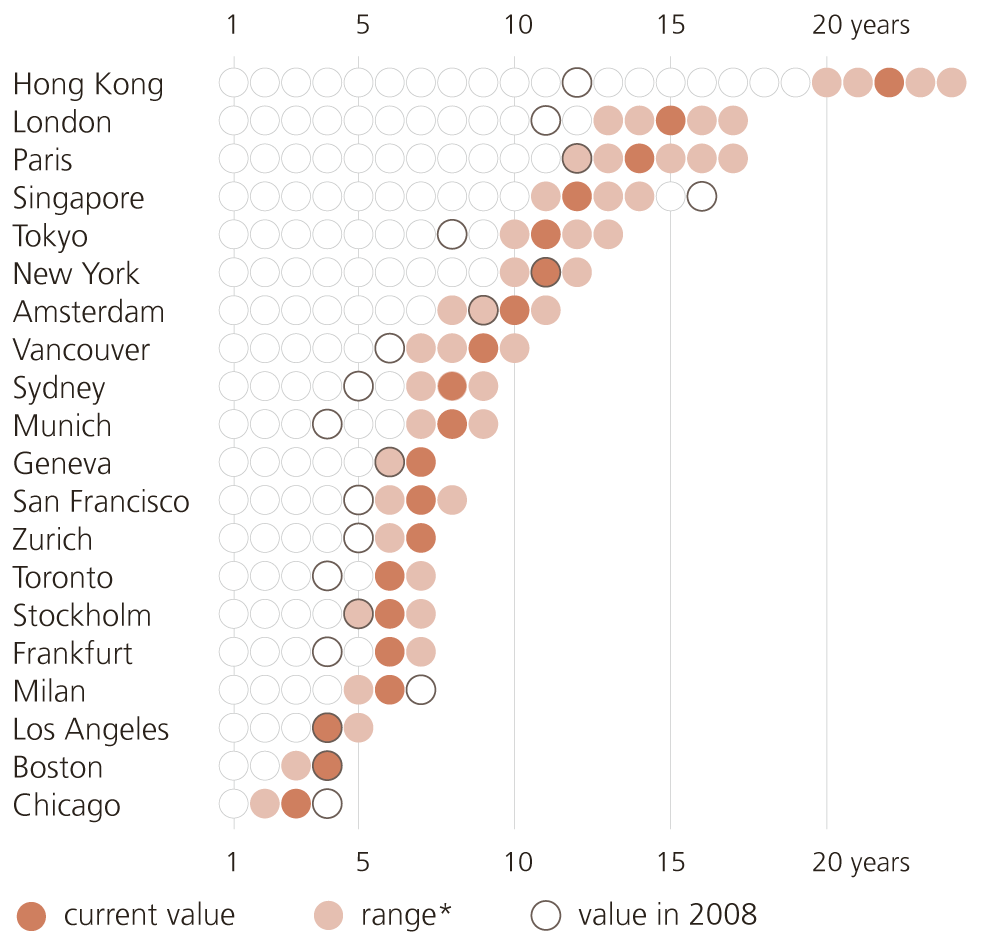 Take the top row: Hong Kong. The filled-in dot is at 22 years. That means it would take 22 years to buy the apartment there if you were making the average income in that city, which, keep in mind, is already often already adjusted for cost of living. (The empty dot is what it cost a decade ago: 12 times annual income. The lighter dots represent the margin of error.)

Now Hong Kong is a nice place. It’s just a short ferry ride away from the world’s next great economic power, mainland China. And it’s got a lot of high-income earners. In fact, the average income in Hong Kong, in terms of purchasing power, is about $60,000 U.S. dollars. But how can it take 22 years of that income to buy an average 646-square-foot apartment? Who but the rich could ever afford one?

And therein lies the most plausible way to interpret this chart: it’s not locals who are buying. As The New York Times reported a year ago, while the numbers are hard to pin down, a lot of the new apartments in hot metro high rises are just investments by the Chinese nouveau riche, Russian oligarchs and Brazilian bigshots looking to park money abroad, safely. As a result, many of apartments in these cities now sit empty most or all of the year.

So what’s the next big city to draw foreign investment? I have no idea of course, but it might be worth looking at the bottom of the list.

By comparison to so many of the world’s major cities, Chicago appears to be a huge bargain at the moment. Its empty dot is actually to the right of the filled-in one, meaning it’s cheaper for a typical Chicagoan to buy a typical 2400-square-foot apartment today than it was a decade ago. And a tenth the price of the same apartment in Hong Kong, relative to local pay.

A warning from UBS: The cities with the biggest disparity between income and apartment costs could be entering a housing bubble.

UBS cautions that other factors, such as rents, excessive lending and overaggressive construction activity, also play a role, although, it’s nearly impossible to tell exactly when a housing bubble would burst.

Nevertheless, continuing to invest in those cities seems to pose a big risk. Investing in down-list cities like Chicago might be a better bet.

Left: A woman walks up the stairs as luxurious high rise residential buildings in Hong Kong's West Kowloon district. It would take 22 years worth of an average Hong Kong salary to by a 60-square meter apartment there. Photo by Bobby Yip/Reuters