The Senate passed the U.S.-Mexico Canada Agreement on Thursday with overwhelming bipartisan support in an 89-10 vote. The deal is now headed to the White House, where President Donald Trump is expected to sign it.

Democratic lawmakers and the White House have both claimed victory for changes made to the major North American trade deal, which won approval from the House of Representatives last month after more than a year of deadlock.

The U.S.-Mexico-Canada Agreement is an updated version of the 1994 North American Free Trade Agreement, which eliminated trade barriers between the U.S., Mexico and Canada. The initial USMCA agreement was signed by leaders of the three countries in November 2018 and must still be ratified by Canada following approval by the U.S. and Mexico.

Before they would offer their support, Democrats demanded changes to the deal. In December, House Speaker Nancy Pelosi announced Democrats had reached a compromise with the Trump administration, even in the midst of bitter partisan rancor over the impeachment process.

The most recent version of the USMCA allows both U.S. political parties “to spin this as they want.”

Pelosi said the revamped deal was “infinitely better than what was initially proposed by the administration.” The White House called the deal a “huge win” for American workers, farmers and businesses.

The most recent version of the USMCA allows both U.S. political parties “to spin this as they want,” said Mary Lovely, a senior fellow with the Peterson Institute for International Economics.

Under the new deal, 75 percent of North American automobiles must be produced in the region, and 40 percent of cars must eventually be made in factories that pay workers at least $16 an hour. The agreement is also expected to increase U.S. agricultural exports by $2 billion, with a $65 billion increase in GDP overall.

For Democrats, the backing of labor unions was vital to their support of the deal, as was the securing of environmental protections and the removal of a provision that would have given the pharmaceutical industry more intellectual property protection.

In negotiating with the Democrats, the Trump administration maintained most of the provisions it had requested in the original USMCA, with one additional win: It kept in provisions intended to shield online platforms such as Facebook and Twitter from liability for their users’ content — something Democrats pushed to eliminate.

Here are a few key ways that American lawmakers agreed to change the USMCA, and how that could affect the ratification of the deal going forward.

A top priority for Democrats was getting labor unions to sign off on the USMCA.

They gained labor unions’ support by pushing for factories in Mexico to be inspected, as well as supporting labor laws that will allow Mexican workers to form independent unions and give them more control over their contracts. Mexico had previously pledged to pass those laws, but labor unions said the old version of the USMCA did little to hold Mexico to its promise.

“They tried to build in provisions that would guarantee a greater likelihood that what Mexico has promised to do will be done,” said Bill Reinsch, a trade policy scholar at the Center for Strategic and International Studies.

The revised deal outlines benchmarks that Mexico will have to meet as it reforms its labor laws. If it fails to meet those benchmarks, the U.S. or Canada could argue Mexico is violating the agreement and take a series of enforcement measures.

Although Mexican President Andrés Manuel López Obrador pushed back on factory inspections, the Mexican trade delegation eventually ceded to the demands of the United States. 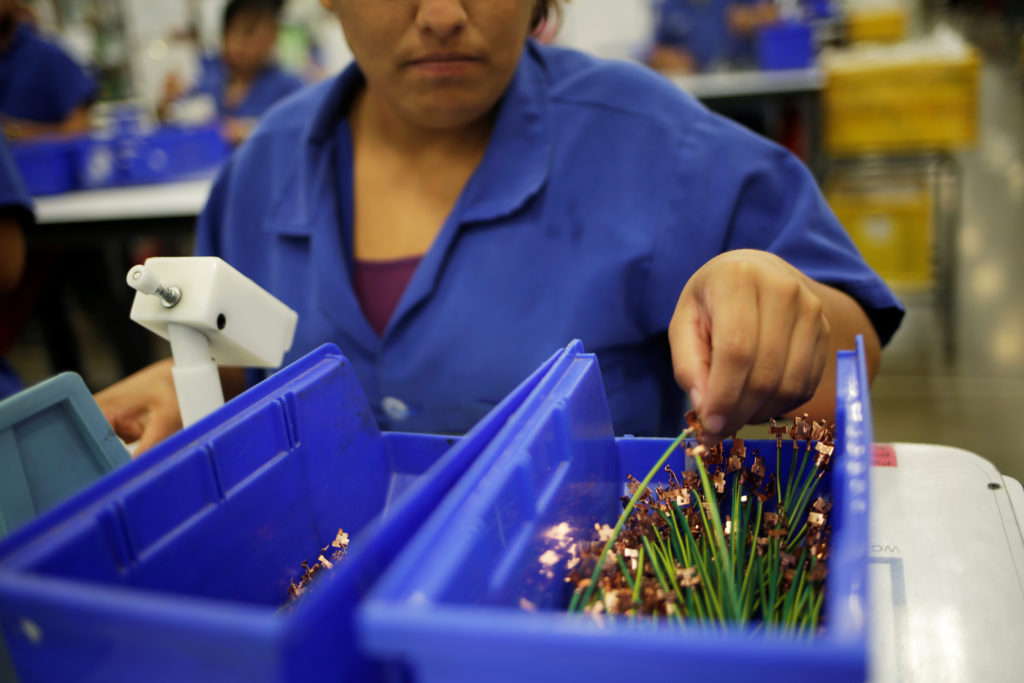 An employee works at an assembly factory that makes wire harnesses and electric components for the automobile industry, in Ciudad Juarez, Mexico, on June 25, 2019. Photo by REUTERS/Jose Luis Gonzalez

“Ultimately, they decided not to let the best be the enemy of the good,” said Eric Miller, president of Rideau Potomac Strategy Group.

Miller noted that Mexico is dependent on free trade for economic survival. In the second quarter of last year, the country’s economic growth hovered around zero, and when Canada’s participation in the USMCA was uncertain, its currency fell by 1.5 percent.

The USMCA labor reforms, coupled with a provision to enhance enforcement mechanisms, satisfied the demands of the AFL-CIO, a coalition of national and international labor unions. In a statement released last month, an AFL-CIO spokesperson wrote, “we have secured an agreement that working people can proudly support.”

“Organized labor hasn’t been in support of a trade agreement” since the 2001 U.S.-Jordan Free Trade, Reinsch said, “so this is a fairly significant statement from them.”

A previous version of the deal, released last May, already called for protections for the ozone layer, marine environments, and air quality, as well as the establishment of a fisheries management system to prevent overfishing. But these provisions were not enough to satisfy a number of environmental groups, including the Sierra Club, the League of Conservation Voters, and the Natural Resources Defense Council.

In a joint statement released Dec. 9, these groups criticized the USMCA, saying it “would encourage further outsourcing of pollution and jobs, offer handouts to notorious corporate polluters, and prolong Trump’s polluting legacy for years.”

The revised deal includes a number of new environmental provisions. One is a clause that presumes “an environmental violation affects trade and investment.” If a government challenges this presumption, they are required to provide proof that this is not the case. Another is the creation of an interagency committee to monitor countries’ commitments to environmental standards.

Despite the revisions, Sierra Club Executive Director Michael Brune said in a statement last month that the deal still falls short of “fundamental changes” that environmental groups wanted to see, including binding climate standards and “meaningful limits” on air and water pollution. 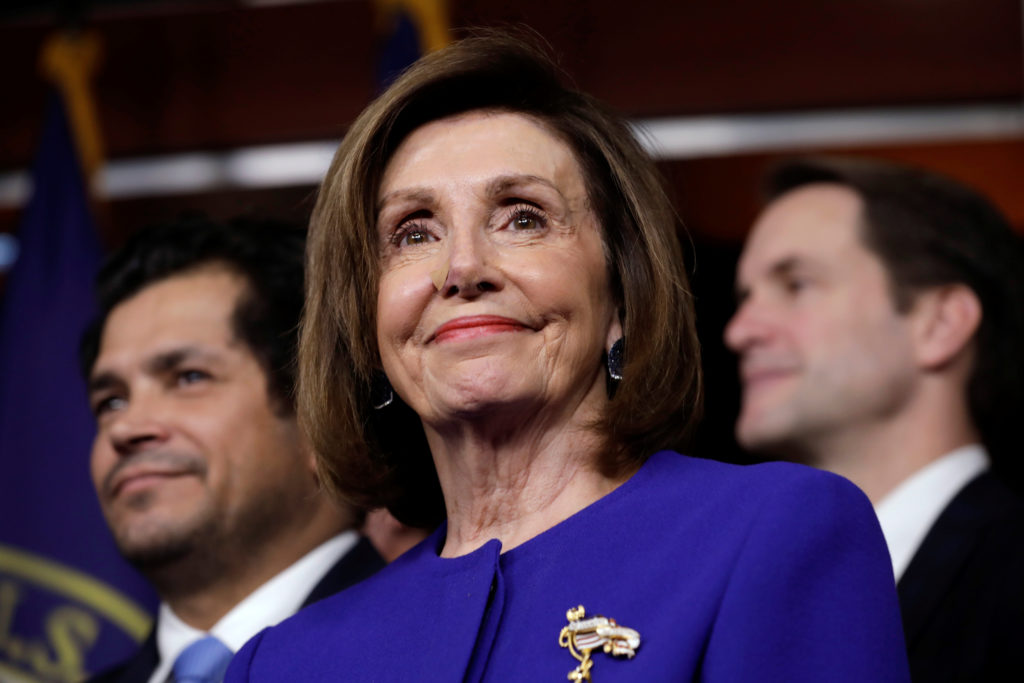 House Speaker Nancy Pelosi smiles during a news conference on the USMCA trade agreement on Capitol Hill on Dec. 10, 2019. Photo by REUTERS/Yuri Gripas

Removal of protections for drug companies

A clause that had promised biologic drug companies 10 years of intellectual property protections was removed from the final USMCA deal. Democrats on the House Ways and Means Committee said in a statement that giving pharmaceutical companies this 10-year claim would delay competition and prevent consumers’ access to affordable medicine.

Democrats are hoping that cutting the provision might allow them to pass legislation that would reduce drug prices. Biologics make up a large portion of health care spending — they accounted for 10 of the highest expenditure drugs in Medicare Part B in 2017 — and reducing the length of intellectual protection could open the way for competition from cheaper drugs.

In a statement released last month, the Pharmaceutical Research and Manufacturers of America said the decision would remove “vital protections for innovators while doing nothing to help U.S. patients afford their medicines or access future treatments and cures.”

“If there was one big loser of the renegotiation, it was the pharmaceutical industry,” Miller said. “This is the first time you’ve seen the diminishment of intellectual property protections in a trade agreement since we’ve been doing trade agreements in the modern era.”

Under NAFTA, parties that took issue with the trade agreement could dispute it via an international resolution panel.

But because countries could block the creation of these panels by refusing to appoint members, it was never particularly effective, said Christopher Wilson, the deputy director of the Wilson Center’s Mexico Institute.

The new USMCA has strengthened the dispute settlement provisions that force companies to cooperate with the panel process. 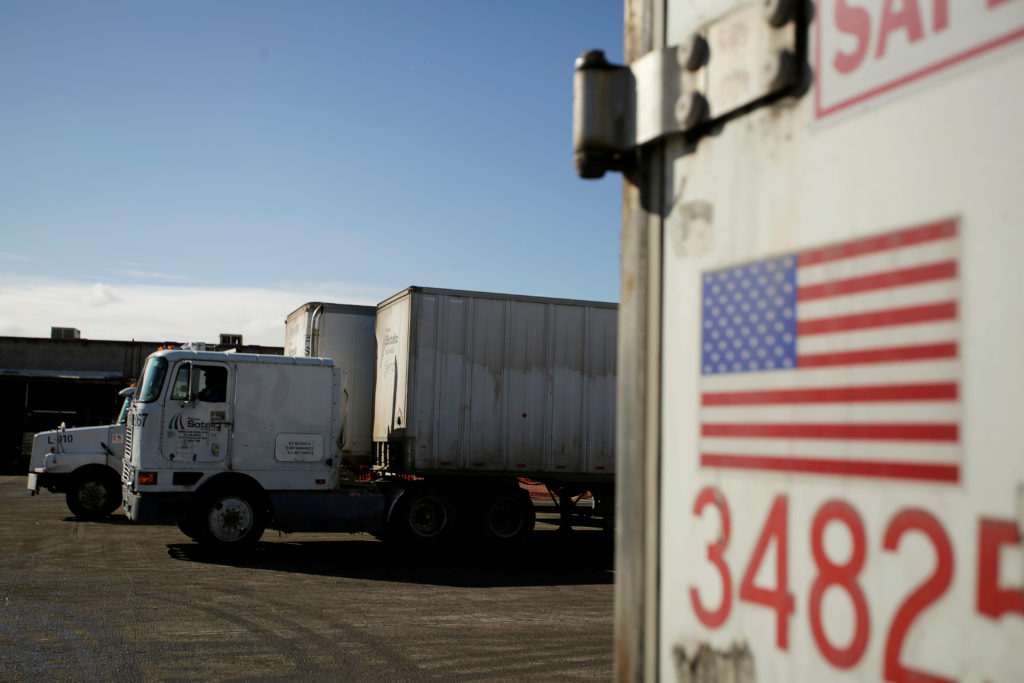 A U.S. flag is pictured on a truck loaded with merchandise at the freight shipping company Sotelo, which transports goods between Mexico and the United States, in Ciudad Juarez, Mexico, on Dec. 10, 2019. Photo by REUTERS/Jose Luis Gonzalez

“This is a way to make sure Mexico lives up to its obligations,” Wilson said.

A number of trade experts noted that U.S. Trade Representative Robert Lighthizer did not support the strengthening of dispute settlements, disapproving of the possibility that it could threaten U.S. sovereignty.

“Lighthizer doesn’t like independent panelists telling the United States what to do,” Reinsch said. “But he had to swallow that one.”

Canadian leaders had hoped to ratify the deal in parallel with the U.S., but Parliament won’t return from a winter recess until later this month.

Left: The flags of Canada, Mexico and the U.S. are seen on a lectern before a joint news conference on the closing of the seventh round of NAFTA talks in Mexico City on March 5, 2018. Photo by REUTERS/Edgard Garrido