What’s behind Google’s $5 billion fine from the EU

The European Commission fined Google $5 billion Wednesday for imposing illegal restrictions on Android device manufacturers and network operators, including requiring them to pre-install Google apps to their phones.

The commission said the tech giant violated antitrust laws with practices that limit consumer choice and “cemented its dominant position” as a search engine. This limits consumer choice and “makes it more difficult for rivals to present more things to us as consumers,” European Commissioner for Competition Margrethe Vestager told the NewsHour. It’s the largest fine the group has issued for an antitrust violation.

Google’s Android devices account for 80 percent of the smartphone market in the EU, compared to about 60 percent in the U.S. Here’s what we know about the fines and what happens to Google and Android users next.

What exactly did Google do?

The European Commission argued these restrictions amounts to a kind of stranglehold on the mobile search engine market.

How has Google responded?

Google has hit back against the allegations.

In a blog post, Google CEO Sundar Pichai argued the company willingly made the Android operating system open-source, meaning that while Google made the initial investment in the technology, it could be shared and modified by the public.. That provides a huge benefit to consumers, he said. 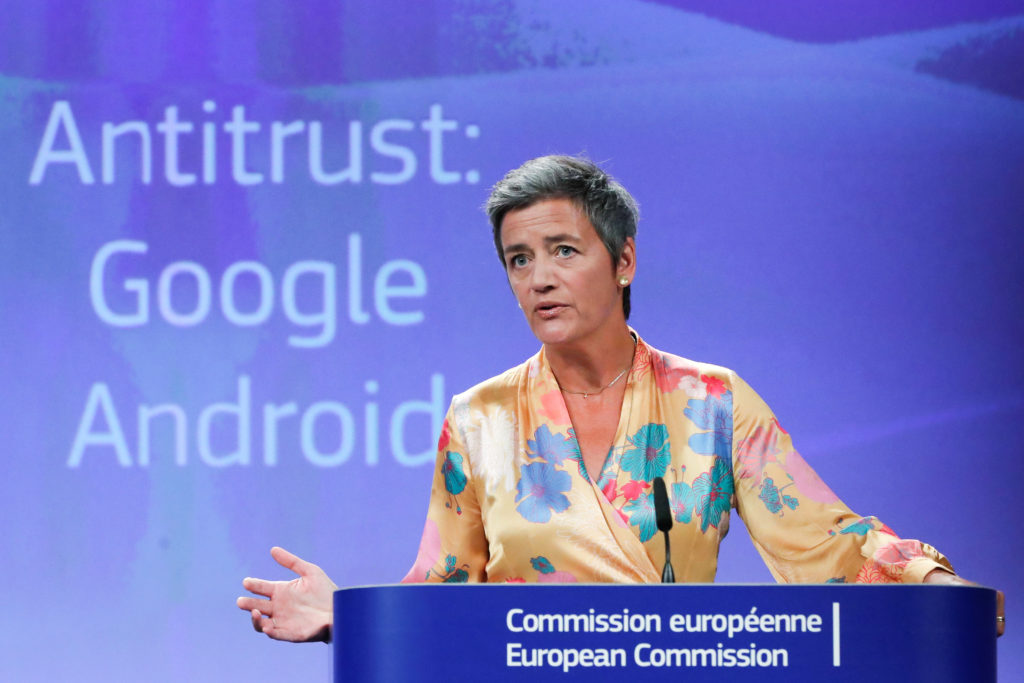 Google makes money when manufacturers pre-load Google apps onto phones and consumers use those apps. But Pichai argued that Google does not prevent manufacturers or consumers from installing competing apps.

“So far, the Android business model has meant that we haven’t had to charge phone makers for our technology, or depend on a tightly controlled distribution model,” Pichai wrote.

And if manufacturers and network operators did not include Google’s app, that could “upset the balance of the Android ecosystem,” he added.

Vestager told the NewsHour that the problem is so few people go out of their way to seek out additional browsers and search engines on their phone. Only about 1 percent of users download search apps, she said, and only 10 percent download browsers that are not pre-installed onto a phone.

“This is why competition is very far away if you first have done something illegal to make sure that the out of the box experience is the Google experience,” Vestager said.

Why is the fine so large?

The commission determines its fine based on three factors: how long the company has been violating the law, the seriousness of the violations and the size of the company.

In Google’s case, the $5 billion fine represents approximately 1 percent of the company’s annual revenue, and half of the profit Google’s parent company Alphabet generated in the first quarter of this year alone.

“I think $5 billion is probably real money even to Google, but their core business is not threatened here,” said Mark Patterson, a law professor at Fordham University who has written a book on antitrust issues.

The $5 billion fine is the largest the European Commission has imposed on Google so far, but it’s not the first. It follows a $2.7 billion fine the commission levied against Google last year for promoting Google shopping over other shopping services in its search engine.

Google must pay the fine and has 90 days to end the practices the European Commission says violate antitrust law. If Google doesn’t, it could pay an additional fine.

But Google also plans to appeal the ruling, which could draw out the process for months or even years.

“Worst case scenario, Google spends a million dollars fighting [the fine],” Patterson said. “And it probably provides them with some PR value that makes it appear they are being treated unfairly.”

Patterson predicted that Google would ultimately end up changing its policies. That would include changing the contracts it has with manufacturers and network providers in at least the European Union. If Google wants to standardize its policies across the board, it could change how it negotiates with U.S. businesses as well.