While President Donald Trump has backed off threats to close the U.S.-Mexico border immediately, the uncertainty spurred by his rhetoric and actions have already taken an economic toll.

On Thursday, Trump threatened to impose tariffs on Mexican goods if Mexico does not stop the flow of migrants and drugs into the U.S. within a year, injecting unpredictability on both sides of the border as he prepared to travel there Friday, particularly into the automotive and agricultural sectors, which need stable policies to make their business plans years in advance.

A number of lawmakers and business organizations had urged Trump to reconsider his threat to close the border. Sen. John Cornyn, R-Texas, told Trump this week that shutting down the border would be a “terrible mistake.” Before Trump’s most recent announcement, White House economic adviser Larry Kudlow said the administration was seeking ways it could close the border without disrupting the flow of commercial vehicles.

But the Trump administration’s decision this week to temporarily reassign 750 inspectors away from ports of entry to deal with migrants is creating hours-long waits at the border, disrupting supply chains that depend on reliable cross-border trade. Homeland Security has left open the possibility of reassigning as many as 2,000 officers. 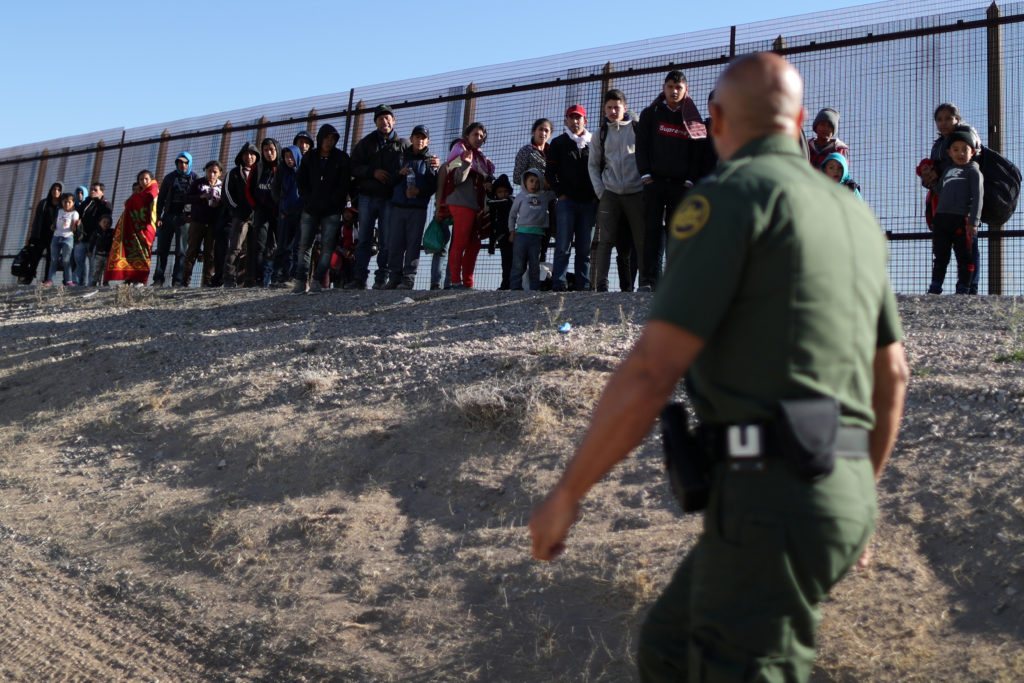 A group of Central American migrants surrenders to U.S. Border Patrol Agent Jose Martinez south of the U.S.-Mexico border fence in El Paso, Texas, March 6, 2019. The Department of Homeland Security has reassigned hundreds of agents away from ports of entry to handle immigrants coming across the border. Photo by Lucy Nicholson/Reuters

Approximately $177 billion of U.S. exports and $246 billion worth of imports make their way across the U.S.-Mexico border each year by truck, based on data from the U.S. Bureau of Transportation Statistics. Mexico is the third largest trading partner for the U.S. behind China and Canada.

The auto industry makes up a large portion of that trade. More than a third of the auto parts the U.S. exports each year go to Mexico — valued at $32.5 billion. A third of U.S. auto imports, valued at $59.4 billion, come from Mexico, according to the International Trade Administration.

The U.S. also gets more than 40 percent of its fruit and vegetable imports from Mexico, according to a 2017 analysis from the U.S Department of Agriculture.

The flow of people across the border is also crucial for businesses that rely on workers and tourists crossing through ports of entry.

When the San Ysidro border crossing was closed for several hours on Nov. 25, 2018, it cost the 650 businesses in the area an estimated $5.3 million in lost sales from shoppers who would have otherwise crossed the border to spend money.

The cost of waiting

The U.S. has for years worked to make cross-border trade more efficient by developing systems that act as a kind of TSA pre-check for commercial vehicles. But it didn’t stop 18-wheelers from being backed up Friday as far as the eye could see on the road leading to the Bridge of Americas, which connects Ciudad Juarez and El Paso. The estimated wait time to cross the border was eight hours. Before this week, the wait time was typically under an hour, according to U.S. Customs and Border Protection.

Similar scenes are playing out at ports of entry across the southern border. At Laredo’s World Trade Bridge, the entry point for 40 percent of all trucks coming into the U.S. from Mexico, the wait time this week fluctuated between three and four hours. Border crossings for commercial vehicles in other Texas cities, including El Paso, McAllen and Progreso, as well as in Otay Mesa, California, have all experienced hours-long delays this week. 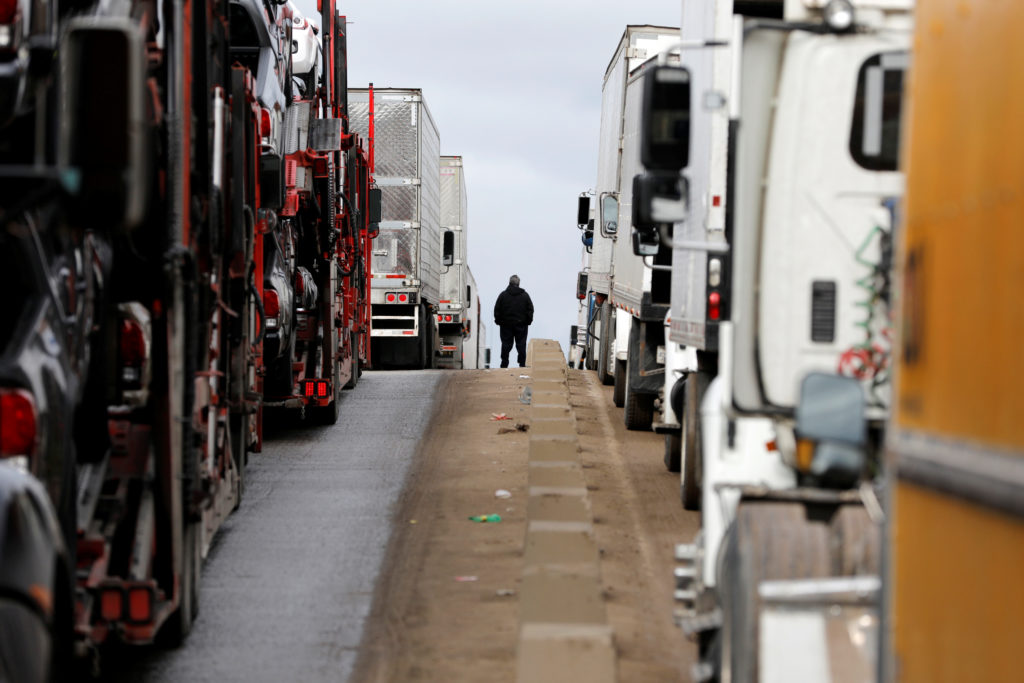 A man stands between trucks waiting in a long queue at border customs control to cross into the U.S, caused by the redeployment of border officers to deal with a surge in migrants, at the Otay border crossing in Tijuana, Mexico, April 3, 2019. Photo by Carlos Jasso/Reuters

Sunday service will be halted entirely this weekend at the Nogales-Mariposa port of entry. The commercial cargo facility at the El Paso port of entry, is also closing on Saturdays indefinitely, CPB has announced. That port of entry typically processes around 350 trucks each Saturday.

When truck drivers are sitting at the border for hours, companies have to pay more for fuel and the drivers’ time. Companies must then decide whether to pass those costs along to the consumer or divert money away from other investments.

Estimates from the San Diego Association of Governments, a regional planning agency, have shown that delays at the border can add up to billions of dollars in economic losses and cost thousands of potential jobs.

Stakeholders in the produce industry warn any delays could have devastating effects during what is now peak season for cross-border trade of produce.

When your business is fruits and vegetables, any disruption in the supply chain can lead to substantial losses because they are perishable goods, said Richard Owen, vice president of global membership and engagement at the Produce Marketing Association.

Truckers waiting at the border could choose to turn off their trucks to save fuel, but that would also cut off the power supply to refrigerators that are keeping the produce cool. A few hours without refrigeration in the hot sun could hurt the freshness of the produce and mean it won’t last as long by the time it gets to the grocery store or consumers’ homes.

“The longer these delays get, the bigger the economic impact.”

Companies could choose to divert their trucks to another port of entry, but that might require a longer route, and accordingly, add to how much they’re spending on fuel.

“The longer these delays get, the bigger the economic impact can be because businesses have to make monumental decisions,” said Gary Becker, chief economist for the Washington, D.C., based consulting firm Catalyst Partners and former head economist in the Department of Homeland Security’s private sector policy office, where he focused on improving the efficiency of border crossings.

Another supply chain that depends on these border crossings: the auto industry, which often relies on car parts manufactured in one country then shipped across the border to be matched with other parts. The process can be repeated multiple times across the U.S., Mexico and Canada before a car is fully assembled and then shipped across a border once more time to be sold.

When these supply chains are free-flowing, companies can use the parts — like seat belts and transmissions — almost as soon as they receive them. If that supply chain is disrupted, factories have to halt operations.

If delays become frequent, companies will be forced to start holding larger reserves of parts so they have enough products to keep their factories running. That added cost would likely be passed on to consumers.

For now, companies are hoping the holdup at the border is just a short-term hassle.

Trump’s threat to impose tariffs on cars coming in from Mexico compounds the uncertainty.

“If the drugs don’t stop — Mexico can stop them if they want — we’re going to tariff the cars. If that doesn’t work, we’re going to close the border,” Trump said Thursday.

Mexican officials quickly responded, saying Trump could not impose tariffs under the U.S.-Mexico-Canada Agreement his administration negotiated last year and which is now waiting to be approved by the three countries’ legislatures. The agreement specifically exempts virtually all cars, trucks and auto parts from such tariffs. 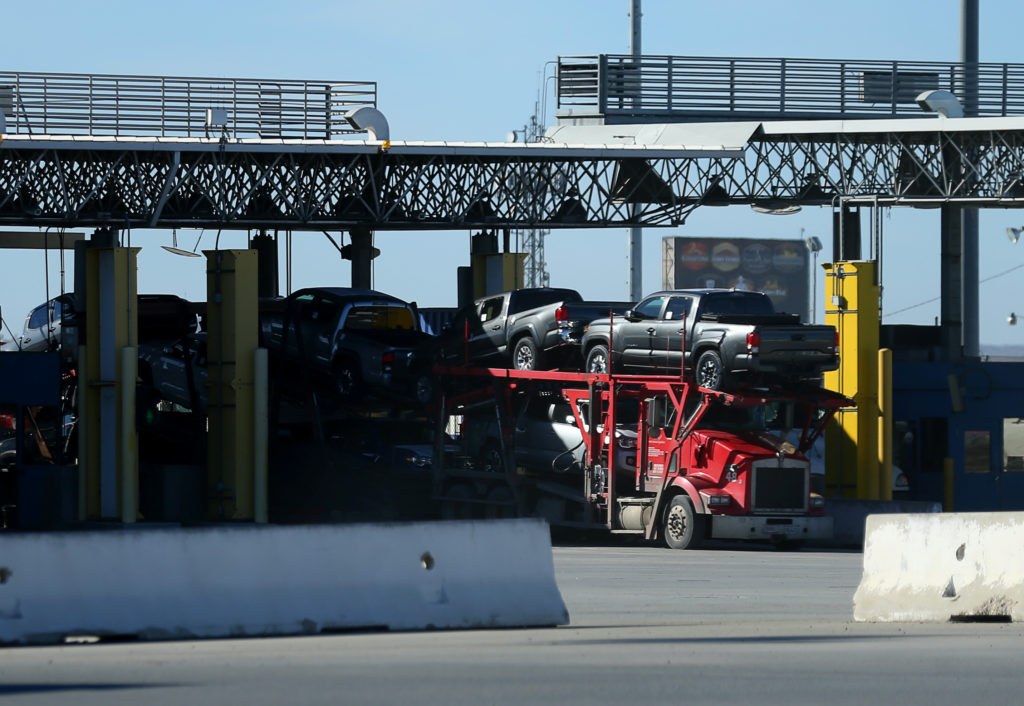 New trucks are transported across the the border into the United States from Mexico at a federal facility in Otay Mesa, California, January 27, 2017. Trump has threatened tariffs on cars coming from Mexico if the nation does not do more to stop immigrants from entering the U.S. Photo by Mike Blake/Reuters

Trump suggested Thursday he might be willing to break that agreement.

“The USCMA is a great deal for everybody, but this is more important to me than the USMCA,” Trump said.

Trump has a lot at stake in the USCMA deal, which he pushed through as a replacement to NAFTA. But much of Trump’s political agenda has centered around one issue since the first day he announced his candidacy for president: stopping illegal immigration.

If tariffs did go into place, they would hurt U.S. suppliers, who would have to choose between swallowing the high cost of the import tax or passing it onto their consumers.

“It would make the domestic [automobile] industry uncompetitive,” said Bill Reinsch, a trade policy scholar at the Center for Strategic and International Studies.

All of these factors are making it difficult for companies to plan ahead. It’s even more difficult for the auto industry, which is already facing major uncertainties because of other factors such as the price of oil, the threats of a recession, the growing ride-sharing market and the rising demand for electric cars and vehicle automation.

“This is a long time-horizon industry, and nothing is certain right now.”

“We have to decide now what you want to buy eight years from now, what the tech costs are, trade rules, cost of inputs, paint colors, design features,” said Kristin Dziczek, vice president of Industry, Labor & Economics at the Center for Automotive Research. “This is a long time-horizon industry, and nothing is certain right now.”

For U.S. auto leaders, throw on top of that the task of convincing business partners in Mexico that they should continue to rely on you despite not being able to ensure the free-flow of goods across the border.

“Trade relationships by their very nature are fragile,” said Texas Association of Business CEO Jeff Moseley. “They are built on trust, so when uncertainty is brought in, it is hard for suppliers. If they don’t see the certainty of their market, they will look for other markets.” That could mean lost business for years to come.

Meanwhile, the price of a Hass avocado jumped 44 percent this week on fears that the fruit might not be available in the future — evidence that uncertainty can and will spike some prices for consumers in the short term.

Left: Trucks wait in a long queue for border customs control to cross into the U.S., caused by the redeployment of border officers to deal with a surge in migrants, at the Otay border crossing in Tijuana, Mexico April 2, 2019. Photo by Jorge Duenes/Reuters