The Three Reasons Countries Get Rich: Location, Location and Location

For decades, economists have pointed to the impact of political institutions and culture on countries’ economic development. Farther down the development road, the choices our leaders make, the well-known author Jared Diamond has argued on the NewsHour, have a lot to do with which societies overcome crisis and which self-destruct.

But in research published this month, famed development economist Jeffrey Sachs, of Columbia University’s Earth Institute, and Gordon McCord, of the University of California, San Diego, diverge from the canon’s emphasis on institutions, and instead highlight a different set of factors to explain which nations made it first and why poor countries are still poor.

Pointing to endogenous geophysical realities — factors inherent in the location and climate of the countries — the argument is one Sachs began exploring several decades ago and one that has more in common with Diamond’s attention to “Guns, Germs and Steel” or Ian Morris’ “Why the West Rules — For Now.” That is, factors countries can’t change, like where they are located and what resources or handicaps that location bestows upon them, have a lot to do with how far (and early) they develop. 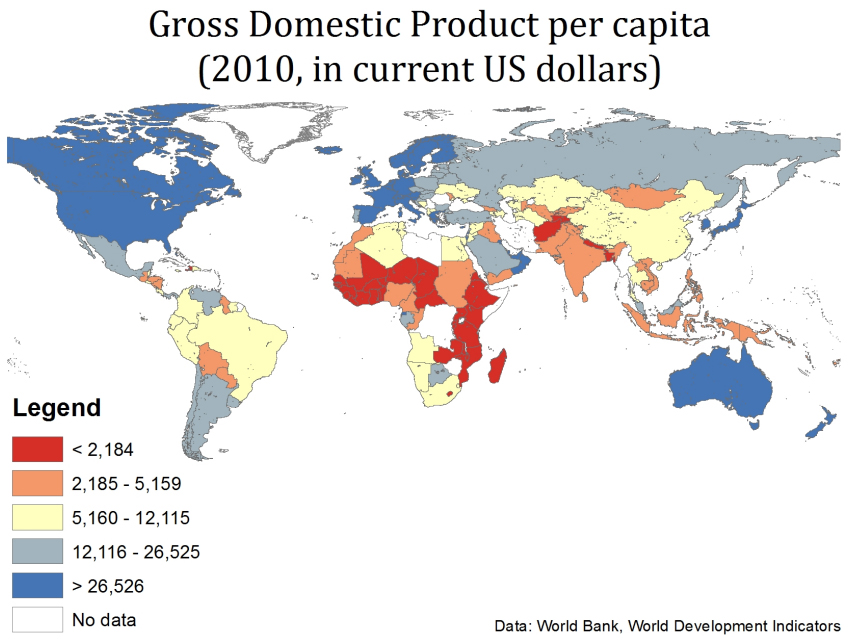 Map of GDP per capita across the world, courtesy of the authors in “Development, Structure and Transformation: Some Evidence on Comparative Economic Growth,” Oct. 2013.

In this map of world GDP per person, there’s a clear geographic pattern. But, of course, many economists have argued that the geographic pattern mirrors historical patterns, namely the spread of colonial rule and/or the evolution of political systems. Actually, Sachs and McCord argue, the explanation for this pattern is found much deeper; in fact, in the very soil of the earth.

Differences across regions in natural resources and physical geography, they contend, have much more to do with which countries make it (earlier) and which ones take longer to emerge than is generally acknowledged.

Britain couldn’t have made the leap without economic and political institutions to advance its great invention, but there would have been nothing to invent, they explain, had Britain not had access to naturally occurring coal and iron near the surface of the Earth. Britain had about $45,000 of coal per person compared to the Netherland’s $8,900 (using today’s energy prices and 1820 population).

Indeed, early economic growth in England came from having a certain set of factors — a certain “DNA,” Sachs and McCord claim, that prevailed in Europe generally. The proximity of a country’s population center to London is associated with earlier development, they write. And even where the spatial distance is much greater, in what they call the “neo-Europes” like Australia and Argentina where development came relatively early, having similar geophysical DNA played a big role.

In other words, the contents of your soil were crucial. In the 1900s, for example, oil was the new coal. Access to it on your home turf facilitated local growth and enabled trade. It was easier to trade and easier to produce exportable goods if your country had natural resources and if food was plentiful enough for labor resources to be freed for industrial production. But high-productivity agriculture demands the right environmental conditions; sunshine, rich soil, water and topography. None can be imported.

Another physical requirement that economists like Adam Smith have long understood to be crucial to development is access to water. One need not look further than sub-Saharan Africa to see the disadvantages of being landlocked.

Disease has famously plagued Africa too, which has a lot to do with ecology and climate. Disease has been a symptom of poorly developed economies and a major impediment to further growth, McCord and Sachs explain, elaborating an argument the renowned Harvard economic historian David Landes, recently deceased, made in his book, “The Wealth and Poverty of Nations.” The reason is slightly more nuanced than you’d think, given that we take so many elements of developed economies for granted. Good health, for example. It’s obvious that a country is only as economically healthy as its people. But high mortality rates also dampen investment in what’s called “knowledge production” — the mass literacy, public education, and basic R&D that fuel growth in developed economies.

A country ravaged by disease, and in turn, by high mortality rates, cannot invest in the production of such capital. Where disease is rampant, the authors observe, families often have more children (to compensate for their expected loss), but those families are then less equipped to invest in each child and his or her ability to contribute to the country’s production of knowledge.

The “poor governance” argument (often employed to explain sub-Saharan Africa’s poor development) has merit, Sachs and McCord admit, but it’s not a sufficient answer. In their analysis of variation in cross-country per capita income, they find that access to fossil fuels and average distance from a port account for 58 percent of the variation; add hyroelectric production per capita, malaria ecology, quality-adjusted land per capita and average temperature, and the authors find 75 percent of the variation accounted for. That’s a huge correlation.

And examining regional within-country variation of per capita income, where the institutional effects are relatively constant, underscores the degree to which geography is important, they argue. Even within the same country, economic activity is higher in areas with more favorable agricultural conditions, access to water transportation, and an ecology less hospitable to disease.

Bio- and geophysical conditions underlie economic growth, though not at the exclusion of institutional factors, McCord and Sachs conclude. As Sachs has done for decades, the authors seek to broaden the conversation about why countries succeed.

And geophysical disadvantages, they remind us, don’t seal a country’s fate; they can be overcome. That should come as no surprise to those familiar with Sachs’ work. A crusader in the world of development aid, Sachs is well-known for his book “The End of Poverty” and as a special adviser to the United Nations on their Millenium Development Goals. In 2006, he started the Millenium Villages Project to test his development theories in Africa, and he’s been a key figure in the debate over the development industry’s efficacy. (See our 2006 debate between Sachs and foreign aid skeptic William Easterly of New York University.)

In a new book, “Idealist: Jeffrey Sachs and the Quest to End Poverty,” writer Nina Munk, elaborating on her critical article in Vanity Fair magazine, argues that Sachs’ idealistic development theories have been no match for the harsh realities of the people in his Millenium Villages.

But the conditions for early economic development that he and McCord lay out would seem about as reality-based as one can get: a country either has an advantageous geography or it doesn’t. And yet, investment in technology, infrastructure and public health, McCord and Sachs urge, can help overcome the physical obstacles that have held back the world’s poorer nations.

So while the geophysical conditions each country is dealt would seem relatively static, what these conditions mean for development is constantly changing, Sachs told us. For example, having mountains did not matter all that much for development before hyrdopower was developed. Likewise, access to renewable resources and the ability to withstand climate change will soon take on increased significance. Understanding how physical conditions have contributed to development, Sachs argues, is crucial to helping countries identify which obstacles need to be overcome and which development goals to prioritize.