Why the 2019 Nobel Prizes in STEM struggled with diversity

On Monday, Esther Duflo became the second woman to win a Nobel Prize in economics in the award’s 50-year history. The French economist, along with Americans Abhijit Banerjee, her husband, and Michael Kremer, were honored for their work to alleviate poverty.

While Duflo’s award is being hailed as a win for female scientists worldwide, she is the only woman to be awarded a Nobel Prize in the sciences this year. Out of the 12 prize winners in physics, chemistry, medicine and economics, all but three — including Banerjee, who was born in India — are white men from either North America or Europe.

If you tally all of the Nobel Prizes in the sciences in history, awards have been given to only 21 women.

If you tally all of the Nobel Prizes in the sciences in history, awards have been given to only 21 women, or 3 percent of the 700 laureates.

The lack of diversity in race, gender and geography among the prestigious international science award winners continues despite changes aimed at making the nomination process more inclusive. Last year, more women were elected to the Royal Swedish Academy of Sciences, which awards the Nobel Prizes in physics, chemistry and economics. By involving more women in the selection and nomination process, the organizations that award the Nobel Prizes hoped that female participants would promote the work of their female peers — steps that have proven effective for other organizations. The scientists who make the nominations were instructed to consider diversity for this year’s awards.

Göran Hansson, the secretary-general of the Royal Swedish Academy of Sciences, said there was a “modest increase” this year in the number of women nominated — but also that scientists are rarely selected the first time they are nominated.

Hansson told the PBS NewsHour in an email that the Academy will continue to instruct scholars “to make an extra effort to identify women scientists who they think should be considered for the Prize.”

The Nobels are far from the only awards that have come under scrutiny. In recent years, people have called on the Oscars, the Man Booker Prize and even Dubai’s Gender Balance Index Award to increase diversity. But while some of those honors have recognized a greater number of women and minorities in recent years, the Nobel has lagged, especially in the sciences.

Historically, the science, technology, engineering and math, or STEM fields, have been largely dominated by white men.

Only 30 percent of the world’s researchers are women, according to UNESCO. Colleges and universities in the U.S. have increasingly diverse faculty, but there are systemic barriers to promotion for women and minorities in higher education. Fewer tenure-track positions are filled by women and minorities, meaning many lack job security that would give them more freedom, status and time to pursue academic research.

That’s important for Nobel prizes, because the awards are typically granted to full professors at prestigious academic institutions. Critics think the Nobel selection process is too narrow.

“We need to think broadly about what it means to have a significant scholarly impact,” said Kimberly Griffin, an associate professor at the University of Maryland and the editor of the Journal of Diversity in Higher Education.

Who gets tenure-track jobs?

A 2016 study from the TIAA Institute tracked faculty diversity from 1993 to 2013. It found that while underrepresented minorities and women had made gains in faculty positions, they accounted for fewer tenured jobs:

Griffin said women and people of color often conduct research projects that directly relate to a specific community, and that that work can be more transformative than some of the scientific advances that generate international recognition.

Meanwhile, even as more women are being nominated for Nobel prizes, the Royal Swedish Academy of Sciences reports that so far its female nominators are no more likely to nominate women than are men.

One reason could be because women do not want to be accused of being biased in favor of other women.

“If you visibly support women, you may get the argument that you are compromising excellence,” said Marja Makarow, professor and director of Biocenter Finland and chair of the Academy of Finland, which awards the €1 million ($1.1 million) Millennium Technology Prize for ground-breaking innovations for a better quality of life. When the biannual prize was first awarded in 2004, only men sat on the selection committee. Now, three of the nine committee members are women, including its chair. Last year chemical engineer Frances Arnold became the first woman awarded the prize.

Overcoming those kinds of biases against women can be challenging, but researchers say award committees simply need to follow the scientific method they use every day in their work.

“When it comes to diversity in STEM studies, we act clueless. We don’t take our scientific mindset or approach to these issues,” said Angela Byars-Winston, the first black woman to become a professor of medicine at the University of Wisconsin–Madison.

Research has proven that good intentions are not enough, Byars-Winston said. Organizations that are serious about increasing diversity must implement well-thought-out strategies with set goals, as well as guardrails that allow women to assert themselves without being penalized, she said.

How the Nobels affect future scientists

Last year, Donna Strickland became the first woman to win the Nobel Prize in physics in 55 years. In an interview with the PBS NewsHour, Strickland recalled the low number of women in the field back when she was earning her Ph.D. and expressed hope that more women would be given the award in the future.

“Things keep changing, and for the better. I’m sure we will see more as time goes on,” she said. 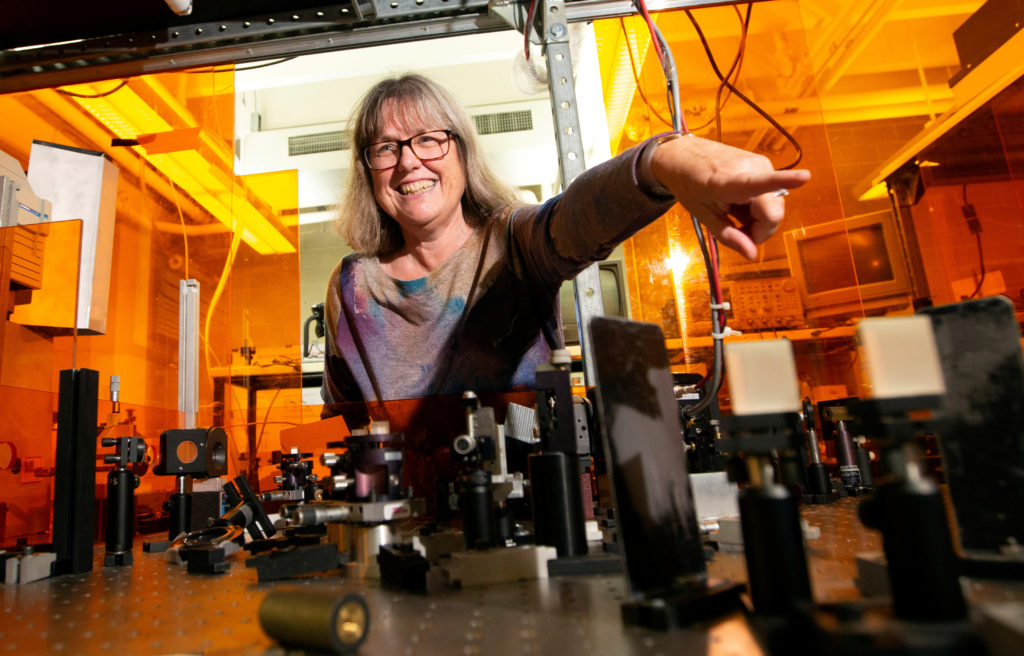 Donna Strickland, an associate professor at the University of Waterloo, is photographed in her lab following a news conference, after winning the Nobel Prize for Physics, at the university in Waterloo, Ontario, Canada, on Oct. 2, 2018. Photo by REUTERS/Peter Power

Scientific fields are changing. Half of all medical school applicants in the U.S. are women, and an increasing number of women and minorities are earning science-related degrees, according to the National Science Foundation.

Hansson, with the Royal Swedish Academy of Sciences, points out that there is a lag between the number of women in the sciences now and the number winning Nobel Prizes. Two decades ago, fewer women worked in the sciences. That’s also when the research was conducted that powered many of the discoveries now being recognized.

“Even with increasing numbers of women going into science today, it will take time before the pool of female Nobel Prize candidates is on par with males,” Hansson said. “However, that fact should not discourage anyone from working to improve the situation.”

“If you don’t see yourself reflected in those prizes, you might not think of yourself as a real scientist.”

Diversity advocates say groups awarding international prizes cannot simply wait for the field to become more diverse before they recognize more women and minorities. That’s because when prizes are awarded overwhelmingly to white men, it discourages women and minorities from entering the fields of science.

“Who wins the Nobel Prize is a way to determine who is a ‘real scientist,’ and if you don’t see yourself reflected in those prizes, you might not think of yourself as a real scientist,” Griffin said.

Last year a study from Microsoft found that when girls had a role model that inspired them, their interest in the STEM fields nearly doubled.

Duflo, this year’s Nobel winner in economics, could soon be that role model for girls and women around the world. At a news conference Monday, she said she hopes her award will “inspire many, many other women to continue working and many other men to give them the respect that they deserve.”

Left: Esther Duflo and Abhijit Banerjee, two of the three winners of the 2019 Nobel Prize in Economics, speak at news conference at the Massachusetts Institute of Technology in Cambridge, Massachusetts, on Oct. 14, 2019. Photo by REUTERS/Brian Snyder