Some good news for the holidays: shopping deals are unlikely to be hurt by the tariffs the U.S. has imposed on $200 billion worth of Chinese goods.

Retailers likely placed their orders with overseas manufacturers and determined the price they would charge their customers months ago, before the tariffs were put into place, according to experts who focus on the retail industry.

“Those are all basically ordered six to eight months in advance to accommodate the production cycle but also the shipping cycle,” said Jack Kleinhenz, the chief economist for the National Retail Federation.

Even if retailers are feeling the effects of the tariffs, they are likely to do everything they can to keep that cost from being passed on to the consumer for fear it could hurt their total sales or look like a political statement about the president’s policies.

Sheer competition is likely to hold down prices.

“It would be very difficult for them to say, ‘Hey this price is going to go up.’ It would be a highly politicized move, especially in the current environment,” said Shawn DuBravac, the president of the Avrio Institute, a research and consultancy firm that focuses on technological trends.

Sheer competition is also likely to hold down prices. Retailers are all striving to catch customers attention with the cheapest big screen television or two-for-one deals.

That’s where smaller businesses might be at a disadvantage because they cannot absorb costs as easily as big box stores, Kleinhenz said.

The news might not be so good next year

If the existing tariffs remain in place, businesses might decide to pass on some of the costs to consumers.

It’s easier for companies to do that when they release new products — or new models of existing products — because customers can’t as easily see the price change like they can with goods that are already on the market. 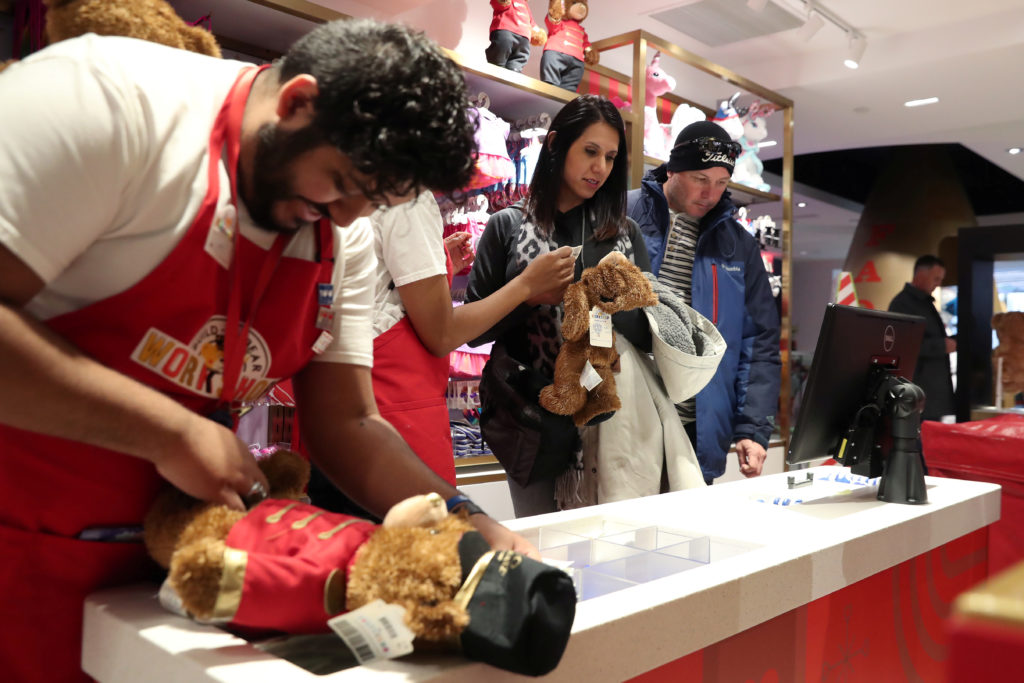 People shop at the new flagship FAO Schwarz store in Rockefeller Plaza in New York. Toys are not on the current list of Chinese goods subject to tariffs, but they could be included in the next round. Photo by Shannon Stapleton/Reuters

If the U.S. decides to impose a 25 percent tariff on all Chinese exports on Jan. 1, as President Donald Trump has threatened, consumers are much more likely to see the effects.

Products like Apple watches, bicycle helmets and children’s high chairs may no longer be exempt from the tariffs, and the sheer volume of taxes on Chinese exports will make them more tangible to the average consumer.

Companies are already taking steps to guard themselves against a price hike. Imports from China have ticked up as shippers try to bring in their products now so they won’t have to pay the tax in the new year.

What about holiday spending?

Americans are expected to spend at least $717 billion in November and December, 4.3 percent more than they did last year, according to the National Retail Federation’s forecasts.

On top of that, many Americans are seeing less of their paychecks going toward federal taxes because of the GOP tax overhaul. More money in Americans’ pockets means they are likely to spend more over the holiday season.

Left: People shop in Macy's Herald Square during early opening for the Black Friday sales in Manhattan last year. Americans are expected to spend more this year because of the improved economy. Photo by Andrew Kelly/Reuters