The two economists have not worked together, but the Nobel committee said their achievements are similar because they each built valuable economic models to study global problems.

“They are different in nature, but it’s the same type of recipe that they offer,” Per Krusell, a member of the prize committee said.

Romer, an economics professor at the New York University Stern School of Business, said during a news conference he was not expecting the prize — so much so that he did not answer the first two calls from the Nobel committee because he thought they were spam.

But both Romer and Nordhaus, an economics professor at Yale University, are well known in their fields and have been on the shortlist for the prize in previous years. 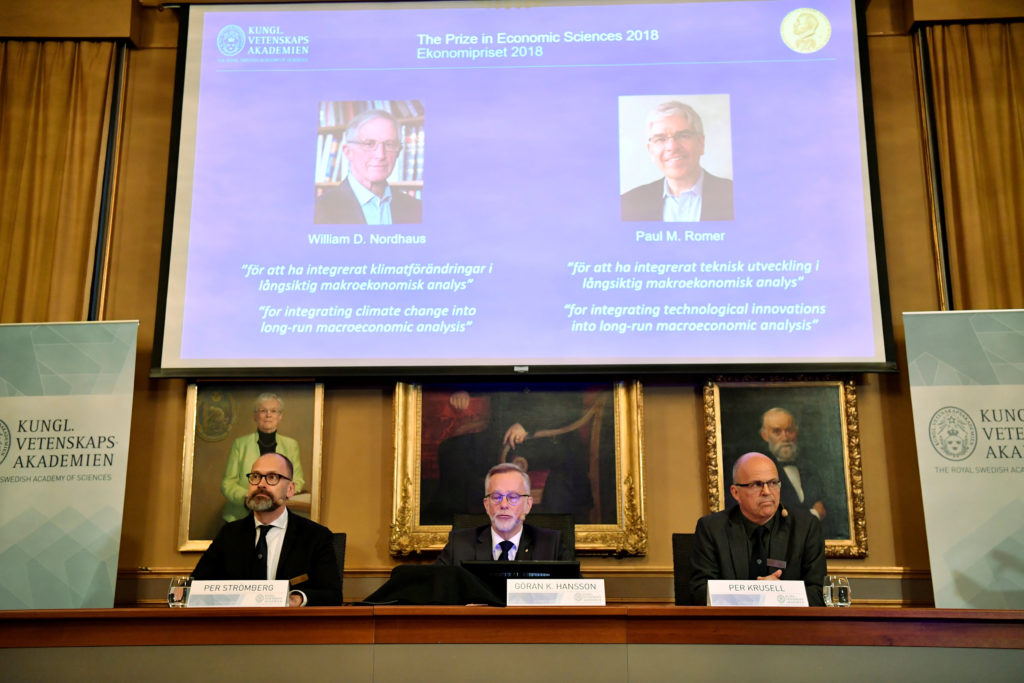 Per Stromberg, Goran K. Hansson and Per Krusell announce the laureates of the Nobel Prize in Economics during a press conference at the The Royal Swedish Academy of Sciences in Stockholm, Sweden. The prize was divided between William D. Nordhaus and Paul M. Romer. Photo by Henrik Montgomery/ TT News Agency/via Reuters

The Nobel committee said Nordhaus was the first person to create a “integrated assessment model,” or a quantitative model, that describes the interaction between the economy and the climate.

Nordhaus is best known for his DICE, Dynamic Integrated model of Climate and the Economy, model. At its most basic level, the model says the economy needs fuel to function, which in turn creates greenhouse gas emissions that lead to climate change. The climate then affects economic growth, and the cycle repeats. 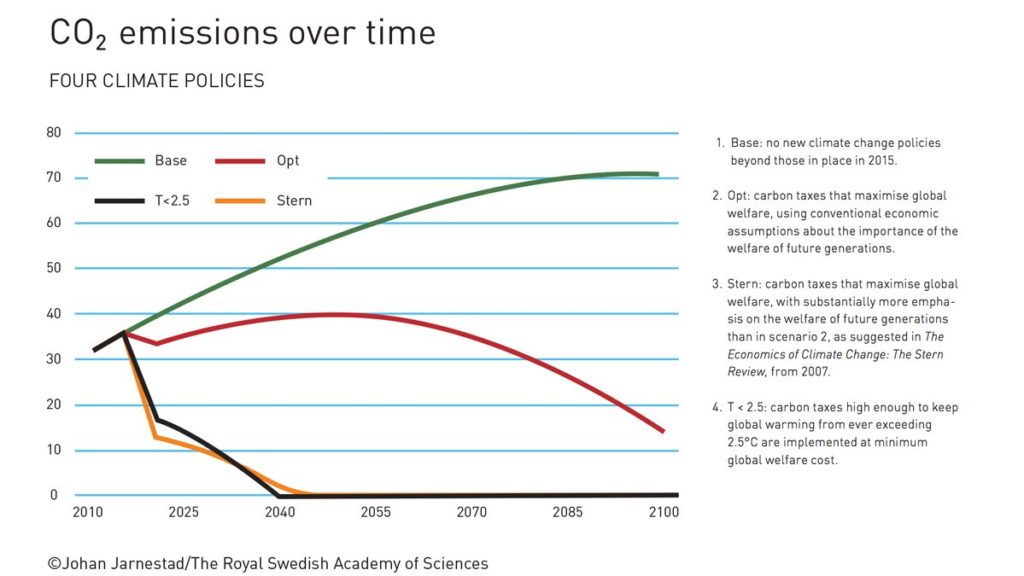 William Nordhaus’ model has been used to determine the economic effects of a carbon tax. Photo courtesy The Nobel Prize

This model could be used to predict a number of economic outcomes from climate policies such as carbon taxes. The model has been used by the Environmental Protection Agency and the Intergovernmental Panel on Climate Change, an international group of scientists who assess the global effects of climate change.

Romer’s work deals primarily with technological change and how innovation and economic growth can be encouraged by a strong patent system and investment in research and development.

Romer laid the foundation for “endogenous growth theory,” which predicts economic growth based on internal factors such as investment in human capital rather than solely on external factors, such as bringing in more advanced equipment and technology from the outside.

We can absolutely make substantial progress toward protecting the environment…without giving up the chance to sustain growth.”

New academic work is beginning to combine Romer’s and Nordhaus’ models by studying how investment in research and development can lead to new technologies that replace fossil fuels, for example.

“If we set about making the policy changes that are required here, we can absolutely make substantial progress toward protecting the environment and do it without giving up the chance to sustain growth,” Romer said via phone during a news conference.

Nordhaus was born in Albuquerque, New Mexico. He received his undergraduate degree from Yale University and a doctorate. in economics from the Massachusetts Institute of Technology before becoming joining the Yale faculty in 1967.

The Sveriges Riksbank Prize in Economic Sciences, as it is formally known, was created in memory of Alfred Nobel in 1968. A total of 81 laureates have been named over the prize’s 50 year history.

Only one woman, Elinor Ostrom, has won the prize, and Leonid Hurwicz is the oldest person to be awarded a Nobel prize. He was awarded the prize in economic sciences in 2007 when he was 90 years old.