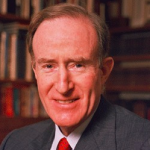 Column: What does it mean when the Fed says it should ‘normalize’?

Editor’s note: Cutting taxes while beefing up the military. That was Ronald Reagan’s economic policy, beginning in the early ‘80s, and one Cassandra-like economist warned of the consequences: massive budget deficits. There would be a “day of reckoning,” Harvard’s Ben Friedman said in, among other venues, a local PBS interview with me in Boston. Friedman proved prophetic, and his 1988 book, “Day of Reckoning: The Consequences of American Economic Policy,” became a go-to for understanding the economics of the Reagan era.

So Friedman has long been a macroeconomist who looks at the big picture. With this in mind, I wrote to him last week for his take on the Federal Reserve’s new policy of raising interest rates, emphasized by Fed Chair Janet Yellen again before Congress. Friedman’s punchline may seem wonky to some, but with all the ideological ranting about the Fed as “the creature from Jekyll Island,” “quantitative easing” as obvious tomfoolery and the Fed’s balance sheet as satanically bloated, the good professor is a valuable and reasonable antidote.

As Federal Reserve chair Janet Yellen made clear in testimony before Congress last week, America’s central bank is likely to move forward in withdrawing the massive monetary expansion that it deployed in the wake of the 2007 to 2009 financial crisis. The U.S. economy is continuing to grow, albeit somewhat slowly, but job creation remains rapid (typically averaging 200,000 net new jobs per month), and unemployed workers now represent as small a share of the country’s labor force as at any time in the last decade and a half. In keeping with the realization that the economy has returned to normal following the financial crisis and the unusually steep recession that it triggered, the Federal Reserve now represents its intended course as “normalizing” monetary policy.

In keeping with the realization that the economy has returned to normal following the financial crisis and the unusually steep recession that it triggered, the Federal Reserve now represents its intended course as “normalizing” monetary policy.

But what exactly is to be “normalized”? Prompted by the crisis and then the recession, the Federal Reserve took two distinct sets of very non-normal actions. It lowered short-term interest rates all the way to zero. And in a further attempt to reduce the interest rates at which most Americans borrow for purposes like buying a new house or a car, it purchased large amounts of bonds including both Treasury obligations and mortgage-backed securities. Numerous statements from the Federal Reserve now indicate the intention to both raise short-term rates — a process it has already begun — and to reduce its holdings of the securities that it bought.

“Normalizing” short-term interest rates seems straightforward, at least conceptually. Most economists conclude that for a variety of reasons, including slow trend growth as well as an enhanced aversion to risk following the last decade’s crisis, the economy’s underlying “real” interest rate on short-term, default-free obligations is now lower than in the past: probably no more than 1 percent, and maybe even as low as zero. The Federal Reserve’s chosen target for inflation is 2 percent. Adding the two together implies a “normal” short-term rate somewhere between 2 and 3 percent. With the Federal Reserve’s key benchmark rate now at 1 to 1.25 percent, the task ahead is therefore to raise rates by another 1.5 percent or so. Without being quite so specific, this is the plan that Chair Yellen and others have indicated.

By contrast, what does — what should — a “normal” central bank balance sheet look like now? Before the crisis, the Federal Reserve’s assets totaled $850 billion. Today, following successive waves of massive securities purchases, the Federal Reserve’s assets total $4.4 trillion. Does “normalizing” the balance sheet mean shrinking back to $850 billion (or, allowing for growth of the economy over the last decade, more like $1.2 trillion)? No one has said.

Some contraction of the central bank’s holdings is probably a good idea. A smaller balance sheet would reduce the Federal Reserve’s exposure to market risk as bond prices fluctuate. If the central bank takes a loss, so do U.S. taxpayers ultimately. But reducing its holdings to the pre-crisis level is not what policymakers should do. Instead, the Federal Reserve should continue to own a sizable quantity of assets, well above what used to be considered normal for a central bank.

There is a fundamental asymmetry in a central bank’s ability to use the two basic tools in its monetary policy arsenal. As long as the lower bound at zero (or something close to it) does not get in the way, a central bank is free to lower short-term interest rates when it seeks to encourage economic activity or raise them if it seeks to implement restraint as it sees fit. Movement in either direction is readily feasible.

By contrast, while the central bank can always buy bonds whenever it seeks to encourage economic activity by lowering long-term interest rates and raising asset prices, if it wants to sell bonds in order to restrain economic activity, it can do so only if it already owns the bonds to begin with. The market usually allows individual traders to go short in amounts that are meaningful for them. But the Federal Reserve cannot go short in amounts that are meaningful for influencing the American economy. It can’t sell what it it doesn’t own.

The U.S. experience in the years leading up to the financial crisis provides an apt example of circumstances under which the Federal Reserve would want to have this valuable tool at its disposal. Knowledgeable observers realized that speculation was driving an unsustainable upward spiral in home prices and that the country was therefore building far too many houses (nearly 2 million per year on average from 2003 through 2006, compared to ordinary absorption capacity, which was closer to 1.3 million). The excesses in the mortgage market that were soon to become the catalyst for the crisis were also readily apparent. As a result, many people called on the Federal Reserve to tighten monetary policy to arrest these potentially dangerous developments.

READ MORE: Column: Why the Fed may aggressively raise rates in 2017

Federal Reserve policymakers declined to do so. Their argument — in the words used by then-chair Alan Greenspan and repeated by his successor Ben Bernanke — was that raising short-term interest rates would be a “blunt instrument” with which to combat excesses in one particular financial market or one specific sector of the economy. Although there is room for disagreement, especially in hindsight, their argument, based on what everyone knew then, was probably right on the merits.

But if the Federal Reserve had then owned $1.8 trillion of mortgage-backed securities (the amount of its holdings today) that it could have sold into the market to drive up down the value of those bonds and thereby widen the spread between mortgage lending rates and default-free Treasury bond rates, the story would have been entirely different. That action would not have been a “blunt instrument” at all. Sales of mortgage-backs, in large quantity, would have reduced the speculative fervor in the mortgage market. Higher mortgage lending rates would have taken the top off of the housing boom.

The Federal Reserve should therefore be cautious as it turns to “normalizing” its balance sheet along with the level of short-term interest rates. Few people would recommend that a central bank that does not own large quantities of securities should go out and buy them merely to have a supply on hand in case future economic and financial conditions warrant selling them. But that is not today’s issue. Following the historical fact of the crisis and the recession and then the monetary response to those developments, the Federal Reserve already owns precisely such a supply.

The question now is how many of these securities to sell or allow to run off as they mature in order to return to a more “normal” balance sheet. The answer should be: far from all of them. Some day in the future — perhaps sooner that we think — policymakers may wish they had them.

Benjamin M. Friedman is the William Joseph Maier Professor of political economy at Harvard University. His best known book is "The Moral Consequences of Economic Growth."