Today we welcome once again our friend and monetary minstrel Jon Shayne, aka Merle Hazard, a Nashville investment manager. Shayne has written and sung such classics as “H-E-D-G-E,” “In the Hamptons,” “The Greek Debt Crisis” and “Inflation or Deflation?” He shared one of his latest hits, “Fiscal Cliff,” with us on Making Sense. You can access his entire oeuvre here.

Today, he conducts an interview with Andrew Smithers, a British economist. We’ll let him take it from here.

Jon Shayne: Late last year, Andrew Smithers answered questions on this page about how labor’s share of output in the U.S. has declined over the past thirty years. Judging from the comments received and other reader reaction, many of you would like to hear more about the topic. Andrew was kind enough to agree to answer another round of questions.

This graph of his, which we also used in the first interview, shows how much labor’s share has declined, in favor of capital’s: 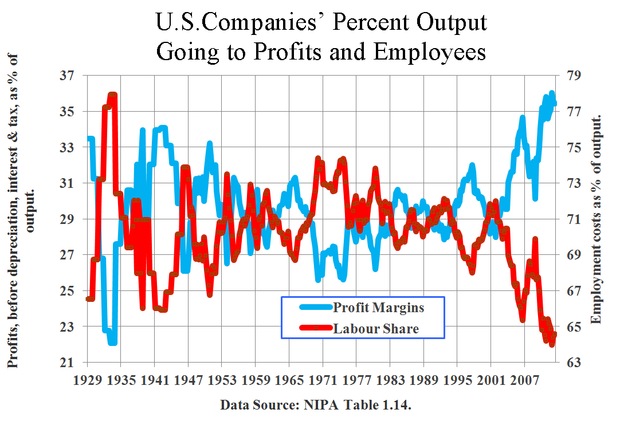 Andrew formerly ran the asset management business of S.G. Warburg, and now heads up his own consulting firm, Smithers & Co., in London. In our last interview, he explained his view that the movement toward a “bonus culture,” in which business managers get paid for short-term rather than long-term profits, is responsible for the diminishment in output going to labor.

Jon Shayne: Andrew, a reader asked whether the problem of labor’s lower share can be solved by higher income tax rates, at least on those with very high incomes. Can it?

Andrew Smithers: Yes, it would, I think, fix the problem, but it would probably cause a great deal of other damage — for example many of the best U.S. managers and entrepreneurs might choose to emigrate, as French ones are doing in response to high threatened French taxes. We need a solution to the perverse incentives of the modern bonus system, but a better one than very high marginal tax rates.

Jon Shayne: In our prior piece, you said that the respective shares of labor and capital are mean-reverting. In other words, you are saying that labor’s share will, in time, go back up to its average level, and capital’s share will go down. Why? Is the mechanism of reversion political, or more purely economic?

This is one of those all-too-rare economic theories which is supported by the evidence. Professor James Mitchell, of the University of Warwick, has done a statistical analysis of the US data from 1929-2011 that confirms the US profit margins are mean-reverting. I will put be putting some of the details of his research into the appendix of an upcoming book of mine.

Note from JS: In the background of Andrew’s answer is the idea that as technology, i.e. capital, improves, it produces more output per hour of labor. This actually makes workers more valuable to employers. All else equal, employers then bid up the price of labor. This is an economic explanation of why living standards have risen over time.

Jon Shayne: Paul Krugman has raised the possibility that labor’s current lower share could be a result of technological advances or looser antitrust enforcement. Or a combination of the two. You gave evidence in the prior interview that technology is not the real issue here, but what do you think about looser antitrust enforcement, which seems to have begun during Ronald Reagan’s presidency, as an explanation? All else equal, if a business gains some degree of monopoly power, it can make prices and profits go up, without raising wages.

Andrew Smithers: The argument for increased monopoly power is, next to the perverse impact of the bonus culture, the best available explanation that I have seen of the level of profit margins and cash flow surpluses of the business sector in the UK and U.S. In fact the two explanations have much in common.

Companies have a great deal of monopoly power in the short term. Unless spare capacity is massive, buyers cannot shift easily to new sources of supply. Managements are thus always making judgments when they make pricing decisions. The risk they take in keeping up margins is that they will increasingly lose market share over time. The risk they take if they allow margins to narrow is that they will make lower profits in the short term. They have to judge between similar risks when taking decisions on investment. The long-term risk of not investing is that they will have higher production costs than their competitors over time, and the risk of investing is that it will lower profits and, in addition, profits per share. (In the latter case because money spent on new investment cannot be used to buy back shares.)

The bonus system encourages management to play down the longer-term risks in order to maximize short term profits per share. It is in effect an encouragement to exploit short-term monopoly power more aggressively than before.

The effect of the bonus system and a rise in monopoly power are thus very similar in many ways. In both cases, profit margins will rise and investment will not rise proportionately, as the rise in monopoly will probably affect the return on existing capital rather than new.

There are, however, some points which make the bonus culture the better of the two explanations.

1) The evidence for an increase in monopoly power is, as far as I am aware, limited to the evidence that profit margins are unusually high and business cash flow unusually strong. But the evidence for the change in business incentives is independent. We don’t therefore need to assume that monopoly power has changed and the principle of parsimony (Ockham’s razor) suggests that the bonus culture should be the preferred explanation unless other evidence for rising monopoly is produced for both UK and the U.S.

2)The bonus culture encourages companies to report highly volatile profits, but this does not apply to an increase in monopoly. US reported profits have become much more volatile than the profits shown in the NIPA, as I show in the Chart below. (NIPA is the National Income Products Account series, published by a division of the US Dept. of Commerce.) 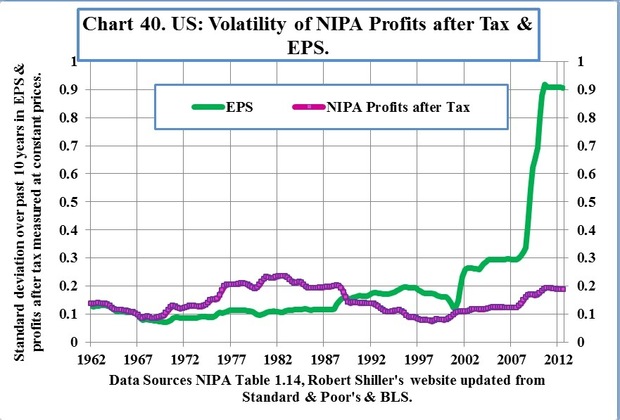 Jon Shayne: I believe you have written that Japan employs much more capital per unit of output than we do. Does the split between labor and capital there look much different than here? Could it be that as more of our output is produced by machines and computers, those who own capital actually deserve more of the pie? I mean, in my great-grandfather’s day, if you wanted to dig a ditch, you called in twenty workers with shovels; today, it is one worker with a backhoe. Should some of what used to be wages be going to the backhoe owner, as a reward for investing in the machinery?

Andrew Smithers: At least half of Japan’s capital stock was destroyed in WWII. Capital was therefore in short supply and returns on capital and profit margins were very high (as the chart above shows). High investment brought down the return and profit margins are now below the very high US ones. Looking ahead, average profit margins in both countries are likely to be similar and lower than they were in the year to Q3 2012.

We have no good data to compare the amount of capital currently being used in both countries. My guess is that Japan has been over investing, and the US under investing, for long enough for Japan’s capital stock to be greater (relative to GDP) than that of the US.

The person who provides the capital to buy the backhoe (whatever that is — you are too technical for me) will get a return for doing so. The return on equity has rotated around the same level (approximately 6 percent in real terms) for the past 210 years. As output rises with more equity capital, the return on that equity capital remains constant. Both labor and capital share in the improvement, and the proportion of output that goes to either remains constant. You can’t have a stable situation in which either labor or capital has a rising share of output, as one share would tend to zero and the other to 100%.

Jon Shayne: In the first graph above, you defined capital’s profits as being before depreciation, interest, and taxes. But owners of a business actually have to bear all of those expenses. Isn’t the net number more relevant than the gross? And, is the answer we get materially different when we look at net numbers rather than gross?

Second, there are two different definitions in the NIPA Table 1.14 for depreciation. You will get different answers depending on which definition you use.

Finally, depreciation depends on the future growth of real wages. We cannot therefore know the right value for depreciation until a long time has passed. Depreciation is probably the least accurate piece of data that is published in the national accounts. There are strong arguments for believing that it has been consistently understated in the national accounts. Unlike most other data it cannot be checked from the different estimates of GDP derived from the expenditure, output and income data.

Jon Shayne: Andrew, what do you mean when you say that depreciation depends on the growth of future wages? Is it that the cost of replacing machinery depends on what workers will receive for building that machinery in the future, at a wage level unknown at present?

Andrew Smithers: When a piece of equipment is purchased it embodies in it the technology of its time. You may learn to operate it a bit more efficiently, but in broad terms, improved efficiency requires new equipment. If you use old equipment, the output per person employed will not rise, but the costs of employing people does and as real wages rise the costs rise faster than selling prices. Over time, therefore, the equipment becomes uneconomic. The faster real wages rise, the shorter the lifetime of the equipment becomes, and the faster you should depreciate.

Jon Shayne: We have been discussing these matters mainly from the standpoint of citizens and policy makers. What about investors? If capital’s share is historically high now, and headed down, doesn’t it mean that normalized profits are lower than reported? And does that mean that an investor who fails to take this into account will be overvaluing the stock market?

Andrew Smithers: Yes. The valid measures of market value i.e. q and CAPE,which allow for current high profits, show that US equities are 40 to 50 percent overpriced.

Note from JS: “q” is a measurement of the fair value of the U.S. stock market based on net worth, as explained here. The other method Andrew mentions, CAPE, which is short for “cyclically-adjusted price/earnings ratio,” is based on earnings for the past decade. Robert Shiller, of Yale, publishes the CAPE measure, and The Economist explains it here.

Jon Shayne: Can you estimate for us the degree to which you believe the earnings of the S&P 500 are above trend?

Note from JS: As mentioned in our prior post, Andrew provides research to over 100 money managers around the world (including me), through his firm, Smithers & Co., in London. He is the author of the books “Japan’s Key Problems for the 21st Century” (with David Asher) (Diamond Press in Japanese 1999); “Valuing Wall Street” (with Stephen Wright) (McGraw-Hill, 2000); and “Wall Street Revalued — Imperfect Markets and Inept Central Bankers” (Wiley, 2009). He wrote a chapter entitled “Can We Identify Bubbles and Stabilize the System?” in “The Future of Finance: The LSE Report,” published by the London School of Economics and Political Science in September 2010.