Musician as Entrepreneur: How About Rossini’s Gambling Casino? 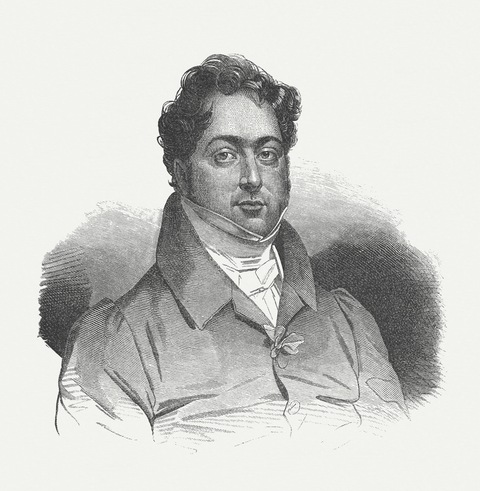 Italian composer Gioachino Antonio Rossini participated in what today would be considered an unorthodox business venture to support opera. Discover how contemporary artists are supporting their careers in our latest Making Sen$e report on Tuesday’s PBS NewsHour. Image courtesy of ZU_09/E+ via Getty Images.

Paul Solman: Greg Sandow is a noted music critic, teacher at Julliard and composer. Featured in our “Starving Artists” segment on PBS NewsHour last month, Sandow also told a favorite story of his about the famously successful composer of “The Barber of Seville” (and 38 other operas). We share the story here.

Greg Sandow: I hear people saying classical music has a thousand year history, and I’m saying, oh, yeah, right, in the 11th century people were dressing up in the fancier clothes. …That’s just not so. When you really study the history (of classical music), it turns out that things were really lively and raucous in the 18th and 19th centuries. The audience talked during performances, applauded and cried out when they heard something they liked or something they didn’t.

So I just read an account of how opera houses were financed in 19th century Italy. I think if you read back (in the history), our present notion — we talk about a field that’s supported by well-heeled donors, foundations, corporations — we think it was true in the past, too. But, in fact, not so.

Classical music was supported, to some extent, by the aristocracy, but it was also very entrepreneurial. So the most famous operatic impresario in Italy — the man charged with putting performances on, on a profit-making basis, or else he would lose his shirt, and the people who owned the actual building where the opera (was), would be really angry at him because they expected a profit — his big secret was to run a gambling casino in the opera house.

Greg Sandow: No, while the musicians were playing, of course. The casino was probably open more hours than the opera house (was) performing. But of course, you want it going while the opera is on because that’s when the most people are in the building, and since they are walking in and out of their boxes anyway and not listening in the way we listen now, he loves it if they go to the casino and they play.

So, his two innovations which guaranteed him a profit were running a gambling casino in the opera house while the opera was going on, and having the ballets that performed during intermissions of the opera danced by dancers wearing as little as possible. It is so 21st century, right? So 21st century and so disreputable.

Greg Sandow: Well, this was the man who made the huge reputation of (Gioachino Antonio) Rossini, who’s now one of the names in the classical music pantheon. And one of the lovely things of this story is when Rossini was famous enough to get invited to Naples, where all this happened, to write operas and have them produced, Rossini demanded a cut of the gambling profits before he would do it, and then was so impressed with the operation that he bought a share in it.

Paul Solman: And then Rossini retired from writing operas and writing classical music at a fairly young age, didn’t he?

Greg Sandow: He retired at age 35, having started, basically, in his teens. And at this moment, when he was prosperous enough to buy a share in gambling in the Naples opera house, he was all of 22. And he wrote several operas a year and by 35 he just said, what the hell — I did it. I have a lot of money. Never again.

Our first piece on artists trying to make it in a tough economy aired last month.

In our earlier Making Sen$e report on “Starving Artists,” above, the full transcript of which you can read here, we showed footage of Opera Southwest’s 2007 production of “La Bohème” in Albuquerque, New Mexico. Some of the artists who appeared in that production have begun their own entrepreneurial ventures to sustain their careers. When Baltimore Opera declared bankruptcy in 2007, Brendan Cooke, who played Colline in “La Bohème,” founded Baltimore Concert Opera, which seeks to engage new opera enthusiasts through affordable productions. Watch his explanation of why opera should be saved here. John Pickle stared as Rodolfo and Ron Loyd as Marcello in “La Bohème.” Anthony Barrese directed the production and has been preparing a critical edition of Franco Faccio’s little known opera “Amleto.”

To see more of Rossini’s talent, check out Opera Southwest’s production of “L’Italiana in Algeri” from 2011.

The NewsHour wants to hear from artists who have found creative ways to turn their artistic passions into means of financial support. Let us know your story here.