The Need for a Long-Term Budget Fix

I wrote yesterday about a chat with the former head of President Clinton’s Council of Economic Advisers, Martin Baily, now of the Brookings Institution.

Most striking to me, was his suggestion that there could conceivably be an upside to the threatened government shutdown. As he put it:

As it happens, we spoke to the esteemed Ms. Rivlin, a lifelong Democrat, the day after Ryan’s budget announcement.

“We’re facing a genuine crisis,” she said. “We have to have a workable plan. Domenici/Rivlin and Simpson/Bowles prove it can be done. I hope the next move is a bi-partisan, Senate resolution because we need radical, comprehensive budget reform.” 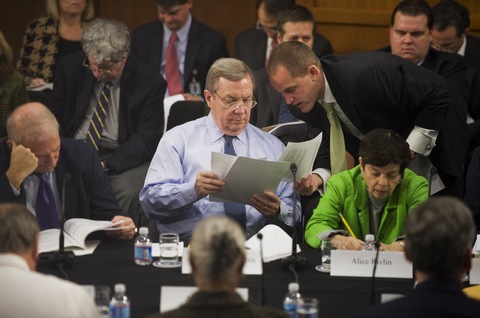 Alice Rivlin (seated in green) with Senate Majority Whip Richard Durbin, D-Ill., and Andy Stern, president of the Service Employees International Union, during a meeting of the National Commission on Fiscal Responsibility and Reform in late 2010. (Photo By Tom Williams/Roll Call)

But when Rivlin ran President Clinton’s Office of Management and Budget, I don’t remember her sounding this alarm.

“I was a deficit hawk in the Clinton Administration but I was not as revolutionary because it was 15 years ago,” said Rivlin, “and the demographic tsunami was not upon us. At the time, while we were concerned about entitlements, they weren’t causing the deficits. We had surpluses. The next move should not have been to cut taxes, for God’s sake, but to address entitlements.” Instead, she said, the Bush Administration cut taxes and added a prescription drug benefit. It should be noted, of course, that some Democrats voted for those measures too and President Obama recently supported an extension of the Bush era tax cuts.

What is the Domenici/Rivlin version of tax reform?

They would reduce the number of tax brackets from six to two. They propose a 27 percent top marginal rate (the only other bracket is 15 percent). The plan is very progressive because of the way in which deductions like home interest are eliminated or modified. A key difference with the Ryan proposal: Rivlin/Domenici suggest a broad-based national sales tax of 6 1/2 percent.

“The main problem with Ryan is that it’s revenue neutral,” said Rivlin. “That’s why the spending cuts are so deep. You have to have revenue increases as well.”

But on our program earlier this week Ryan insisted that increasing revenue with tax hikes is a bad idea. “Raising taxes on businesses at a time when they’re struggling to compete in the international economy doesn’t work.” He added, “we want to address the root cause of our problem – spending. And then, we want to reform the tax code so that it raises the same amount of revenue it does today but does it in a far more efficient way to get economic growth and job creation growing.”

So, I asked Rivlin, what’s going to happen?

“Over the next few months, with the urgency of the debt ceiling and other things, we should get a plan like Simpson/Bowles or Domenic/Rivlin or at least a plan to get a plan. If not, interest rates skyrocket, the dollar rockets, and we get a worse recession than the one we’ve experienced.”

These are the questions we explored at Nomura this morning. The answers should run on the NewsHour soon.