Despite Skeptics, Feinberg Enthusiastic to Put $20B Oil Disaster Fund to Work 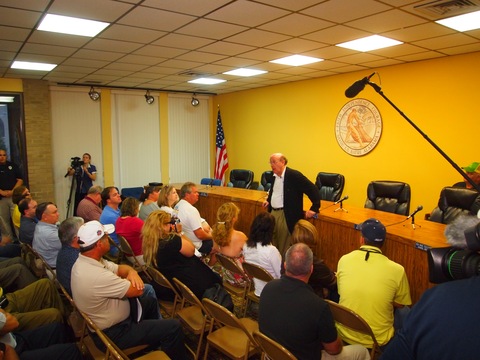 BAYOU LA BATRE, Ala. | At 7 a.m. Saturday, Kenneth Feinberg stood in front of a standing-room only crowd at the municipal building in Bayou La Batre, Ala., and told people “I am your lawyer.” He didn’t get much of a reaction.

Feinberg is the independent administrator of the $20 billion compensation fund that President Obama and BP agreed to establish to pay damage claims arising from the Macondo oil well disaster. Feinberg’s job is to decide who will collect money from that fund. Most of the people in the audience appeared to have already filed claims for such damages with BP before the fund was established.

Feinberg was enthusiastic. He said in a couple of weeks he would be taking over the dozens of claims offices that BP has set up, and that things were going to change. Instead of having to appear in person every month to collect a payment, people would be able to get six months worth of payments at one time. He said that by doing so they wouldn’t give up any rights to sue BP later. Finally, Feinberg said everyone would eventually be offered a lump sum payment for all of their damages. If they thought the offer was fair and accepted it, only then would they sign away their rights to further legal action. He emphasized repeatedly that the whole program was entirely voluntary.

Some people nodded as he said all that, but others were stone-faced. After a few minutes, Feinberg said he was there to listen, and started taking questions. There was no hesitation. Two brothers said they had suffered a total loss — that their seafood processing business would never reopen. Feinberg said that sounded like a legitimate claim to him — that anything directly related to fishing and clearly impacted by oil was eligible for damages. Another man said revenue from his gift shops was down by half because tourists were staying away. Feinberg said indirect claims like that were harder to decide, but that he was in the process of establishing guidelines that would both follow the law and also be fair.

We talked to several people afterwards, and with typical Southern courtesy they said they were “glad to see” Feinberg, and welcomed him to Alabama. But most also said “talk is cheap,” and “we heard all that from BP, too,” just before they started denying claims and reducing compensation.

In an interview with the NewsHour later, Feinberg said that without question, “eligible” claimants would be made whole by the compensation fund process he’s setting up. But it was also beyond question that he has an awful lot of skeptical people that are not entirely convinced that will turn out to be true.