Instead of ‘Fairness’ in the Tax System, Why Not Emphasize Results? 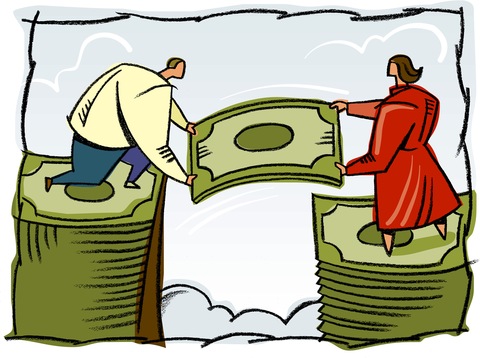 Question: Instead of discussing “fairness” in the income tax system, why not emphasize results? Does revenue increase with a rise in rates or with a decrease in rates? What is the REAL result of a change, plus or minus, in the total revenue following a change in the rates? Someone once said that taxes should be like goose down, the maximum amount of feathers with a minimum amount of hissing. The Laffer curve can be used to demonstrate that there is a point where a decrease in the rate must result in an increase in revenue — going from a rate of 100 percent to 80 percent WILL result in an increase in revenue if what we think we know of human nature has any validity.

Paul Solman: How do you leave “fairness” out of a discussion of income taxes? As to whether or not revenue increases, we just don’t know. And, I would add, we never will know. There are too many other factors at work to isolate tax rates as the causal variable. Laffer’s curve does indeed demonstrate that there is a point — or logically, that there must be — at which a decrease in rates will result in an increase in revenue. But what, pray tell, is that rate? Will going from 100 percent to 80 percent necessarily reduce revenue? Who says?

As it happens, we have a story on this very issue coming soon — maybe even this week. Laffer weighs in, as do Pulitzer Prize-winning tax journalist David Cay Johnston and Nobel laureate Peter Diamond. Stay tuned.

And speaking of fairness and taxes, here’s another recent email:

Question: I saw your piece and am amazed at how the obvious is ignored by economists and other professionals. You questioned whether the lowering of the marginal rates resulted in the booms after World Wars I and II, and even [[Columbia Law School Professor Alex](http://www.pbs.org/newshour/bb/business/july-dec11/makingsense_12-12.html) Raskolnikov expressed ignorance.] When we went to war ordinary Americans invested their money in war bonds, treasuries, etc., with 5-to-20-year maturities. What caused the booms after war was not the war itself, but the redistribution of wealth to the people. This, coupled with pent up demand due to rationing and the invention of new consumer goods, resulted in a spending spree from the bottom up, the 1920s and the 1950s. This spending reverberated throughout the economy as jobs were created to supply the new demand. After WWII the invention of credit cards and money entering the country from overseas as the global market developed extended the natural (trickle up NOT down) capitalist economic cycle of boom and bust until economic disparity reached a tipping point. If the top earners have most of the money, then the masses have no money and the system collapses. Simple. Tax rates are basically irrelevant as they are redistributive rather than creative economic effects. I offer 1929 and 2007 as evidence. What say you?

Paul Solman: Yes, graduated or “progressive” tax rates are indeed redistributive. That’s what makes them so controversial, isn’t it? I.e., that some people think redistribution is unfair, as well as arguably counterproductive by discouraging effort. When I interviewed the economic spokesperson for then-candidate George W. Bush in 2000, he admitted, though not on camera, that he thought an income tax rate of more than 30 percent was simply unfair, end of story.