Over 20 Percent Youth Joblessness and Still No Apprenticeships? 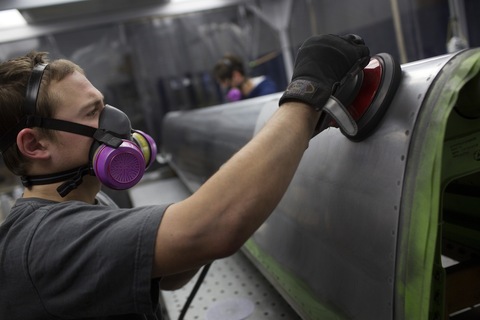 Paul Solman: Robert Lerman is a centrist economist whose first NewsHour appearance in 2011 generated real wrath. Many viewers and the organization Fairness & Accuracy In Reporting (FAIR) objected to his assertion that including Social Security and Medicare as tangible wealth made the U.S. economy look a lot more equal than we, Duke Psychology and Behavioral Economics Professor Dan Ariely and others suggested. You’re encouraged to watch the piece and make up your own mind.

He later appeared in a story of ours about the seemingly sterling school-to-work program Youthbuild, adding the economist’s cold-hearted cost-benefit perspective: “We have not had really serious research that proves that it’s highly effective…on balance [it] may not even capture its costs.”

I mention Lerman’s edgy appearances to give this post credibility — meaning, he is anything but a knee-jerk liberal. Yet he is advocating a government school-to-work program, one that he claims to have seen flourish the world over. I’ll let him explain it.

Robert Lerman: My last post for Making Sen$e argued for a way of reducing youth unemployment and underemployment, raising the skills and productivity of American workers, making young people productive earners as they learn, developing genuine mastery in an occupational field and increasing lifetime incomes substantially. In other words, expanding apprenticeship.

As a longtime and, as Paul Solman says, cold-hearted cost-benefit economist, I base my argument on the data – the evidence. And in this case, the evidence comes not only from European countries with robust apprenticeship systems, but also from studies of earnings gains for apprentices in the United States. Already, many Americans are using apprenticeships to achieve middle class incomes and too few people and policy makers seem aware of the fact.

And thus arises the question, and the motivation for this post: can the United States significantly expand apprenticeship training so that it becomes a viable alternative to college and/or the military for large numbers of young people?

At the moment, we are far behind other countries in offering apprenticeships. The United States is graduating more than 3 million students from high school each year, yet only about 125,000 apprenticeship slots open annually. That’s a measly 4 percent, compared to 40 to 80 percent in most other high income countries.

In other words, at a time when President Obama worries aloud that the United States is falling behind in college graduation rates, neither he nor other leaders point out that we lag woefully behind in generating apprenticeship opportunities, at a rate of somewhere between one-tenth and one-twentieth the opportunities offered by our economic rivals.

So, given the evidence, why can’t we replicate the success of such apprenticeship-oriented countries as Austria, Denmark, Germany and Austria? Many see the barriers as insurmountable.

1) In America, parents want their kids to go to college, not enroll in some work-based program that yields no college degree

3) A sound apprenticeship system requires a major role for unions, but unions make up only 6.6 percent of private sector wage and salary employment (not including the self-employed) and that number is falling

4) The United States lacks a tradition of apprenticeship.

At first glance, these arguments sound compelling. But in fact they are just an excuse for inaction. Let’s examine them, one excuse at a time.

1) While most parents may indeed envision college for their children as the sine qua non for gainful employment in 21st century America, high quality apprenticeships are actually oversubscribed here. Top apprenticeships, such as those provided by Germany’s Siemens Corporation in North Carolina, are attracting students with A- averages.

2) U.S. companies already spend tens of billions of dollars on training and more than 20,000 of them offer apprenticeships. Many more could be encouraged to do so if the programs were in place.

3) While unions play a major role in the German system, they are far less important in Switzerland and England, where apprenticeships play an increasingly important role.

4) Finally, the loss of an apprenticeship tradition has not stopped England from expanding its program from 50,000 in the early 1990s to more than 500,000 today.

The simple fact is that the United States has lacked national leadership and funding to expand apprenticeships. The federal and state governments combined spend a measly $25-40 million per year to encourage apprenticeship. That is a trivial amount relative to what even England spends – equivalent, given the relative sizes of our two economies, to $10 billion per year in the United States — and to what federal and state governments spend on other postsecondary education alternatives (well over $200 billion).

I’m anything but a romantic, so I understand that making apprenticeship into a mainstream alternative will not be easy; if it were, it would have happened long since. But we can learn a lot from recent developments in England and South Carolina, both of which I’ve visited recently.

There are not enough jobs for young people: it’s a problem the world over. Another problem: the cost of college compared to the job opportunities a degree doesn’t guarantee. Apprenticeship can be, and in some countries already is, an obvious alternative. The head of the Rolls Royce apprenticeship program in England told me it is now harder to be accepted into their program than to get into Oxford or Cambridge, and that one of his apprentices is a former first year Oxford student in physics.

Even the tony BBC is on board. The head of the Westminster-Kingsway apprenticeship program told me how the BBC and the college have jointly developed digital media positions.

England’s top political leadership in all parties embraces the expansion of apprenticeship. During Apprenticeship Week in mid-March, Prime Minister David Cameron gave a strong speech, stating, “There’s no better way to back people’s aspirations than to invest in apprenticeships, to invest in the skills that can make a difference to your careers.”

Attractive posters plastered on London subway walls show employers proudly announcing, “I hired an apprentice.” Some apprenticeships in the UK are not at the high standards of the German and Swiss program. But spurring 100,000 employers to offer apprenticeships is a stirring start. England is now moving to upgrade the quality of many apprenticeships.

The initiative’s small, but the business-savvy group’s staff has marketed apprenticeship as a way for businesses to solve human resource problems. A $1,000 state tax credit per apprentice helped the staff get in the door with firms to have serious discussions about training. The result: a jump in apprenticeship slots from under 800 to well over 4,000 in just four years.

So, what is really holding us back as a country? A lack of leadership, minimal funding and knowledge about apprenticeships all play a role. But grassroots and state efforts, along with the influence of international organizations and even the German Embassy in Washington, are beginning to gain the attention of policymakers. A few members of Congress are developing new bills on apprenticeship.

To increase the momentum, I incorporated the American Institute for Innovative Apprenticeship (AIIA) with a new website and Facebook page. Although it will take years to expand to a high-quality, large-scale U.S. apprenticeship system, the task is feasible once a national consensus and high level leadership emerge. With the increasing talk of too much college, at too high a cost, for too few jobs, it’s high time we invested in a proven alternative.

This story was first broadcast Feb. 8, 2012. Watch the video above or read a full transcript of the report.