Editor’s Note: As the fire over collective bargaining and public worker benefits burns across the country, on Thursday’s broadcast we’re looking at perhaps the issue behind it all: public pensions and how to pay for them.

Our story takes place in tiny, tired Rhode Island. The nation’s very smallest state has made $5 billion worth of pension promises it can’t possibly pay for and is shouldering the largest unfunded public pension liability per capita of any state in the country. It may prove a bellwether for larger states like Illinois, New Jersey, and California, each of which has an unfunded liability in the tens of billions of dollars.

How’s your own state handling the problem? We’ve drawn up a map based on data from a 2010 Pew Center on the States report. 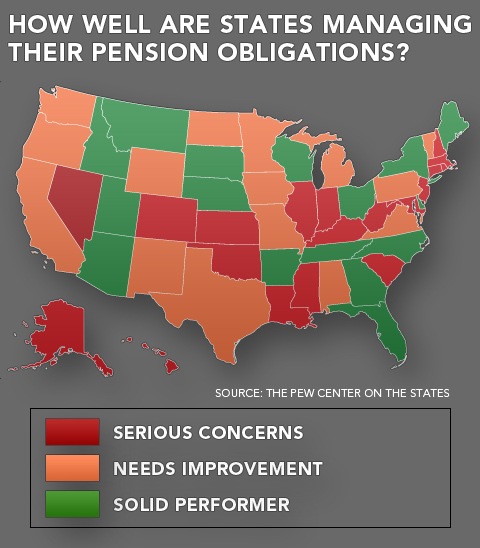 Pew awarded state pension systems up to a maximum of four points – we’ll call that pension perfection, relatively speaking – according to the following criteria: 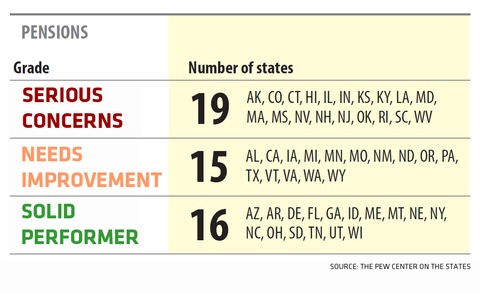 Who’s to blame? The states themselves, Pew unsurprisingly concludes:

“[M]any states shortchanged their pension plans in both good times and bad. Meanwhile, a majority of states have set aside little to no money to pay for the burgeoning costs of retiree health care and other non-pension benefits.”

And for a glimpse at what happens when a government simply can’t deliver on its pension promises, see the recent story about Prichard, Ala. in the New York Times, which we mentioned last month on the Business Desk.

Our second report on the pension crisis in Rhode Island featuring, among others, characters like Providence legend Buddy Cianci and the deposed mayor of Central Falls, Chuck Moreau, should run soon.