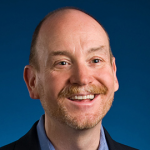 Column: The rise and fall of the U.S. corporation

Editor’s Note: For the latest Making Sen$e report, economics correspondent Paul Solman traveled to Detroit, home of two iconic U.S. corporations: Ford and General Motors. There, he spoke with with University of Michigan’s Gerald Davis about the disappearing American corporation and what it means for the economy going forward.

Below, we have one of a series of excerpts we’ll be publishing from Davis’s new book, “The Vanishing American Corporation: Navigating the Hazards of a New Economy,” on the rise and fall of the American corporation. For more on the topic, tune in to tonight’s Making Sen$e report, which airs every Thursday on the PBS NewsHour.

To a greater degree than almost any other country, the United States has had a corporatized economy for generations. From early on in the 20th century, corporations controlled most of the nation’s economic assets and employed the bulk of the labor force.

By 1930, a mere 200 corporations controlled half of the nation’s corporate assets.

Individual corporations dwarfed the size of other social institutions. In 1910, U.S. Steel’s assets were far larger than the federal government’s annual budget. By 1930, a mere 200 corporations controlled half of the nation’s corporate assets. Commentators at the time stated that corporations were more similar to nation-states than to traditional family-owned businesses. When General Motors’s CEO (and later secretary of defense) told Congress in 1953 that “what was good for the country was good for General Motors, and vice versa,” it was not meant arrogantly or sarcastically. The health of the economy and the health of the largest corporations were inextricably tied. To a great extent, particularly after the Second World War, the largest corporations were the economy.

But if the corporation is the foundation of the American economy, we need to be concerned. GM had about as many employees in 2015 as it did in 1928, which was just one-fourth of its size in the 1980s. Its total North American workforce today is about as large as the number employed at Ford’s famous River Rouge plant in the 1930s. 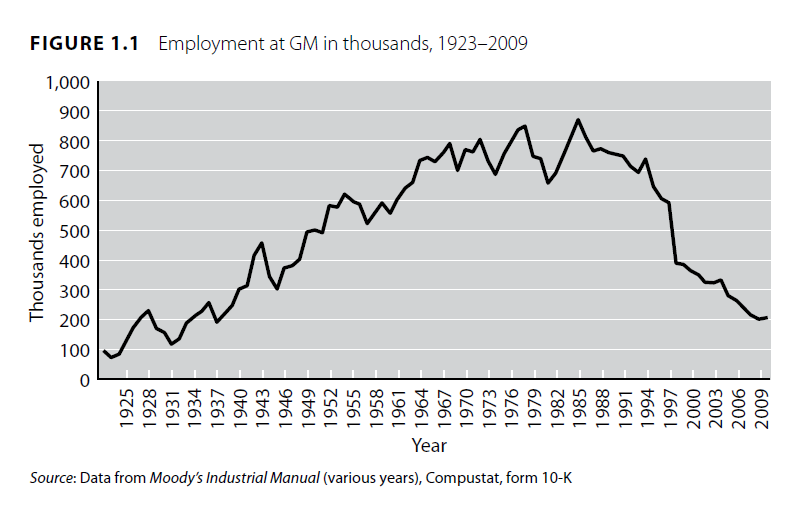 An optimist might suggest that those jobs have simply shifted to other, growing industries, such as computers and electronics. Yet according to the Bureau of Labor Statistics, employment in the computer and electronics industry has actually shrunk dramatically since 2000, dropping 750,000 American jobs. And how about telecommunications and information services? Nope. There is about 1 million fewer jobs in that sector in 2013 than in 2000. 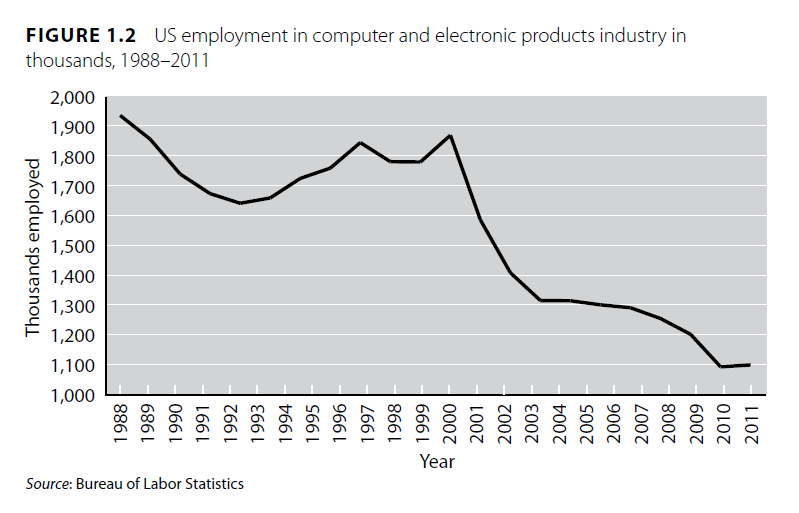 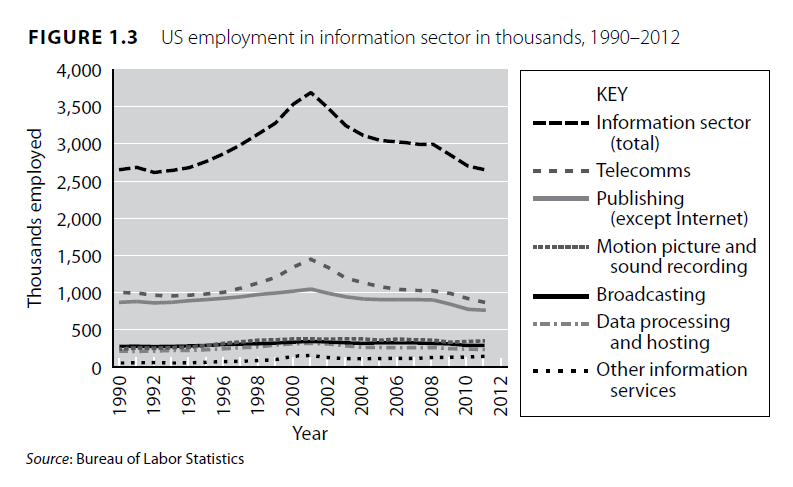 In fact, the number of public corporations has collapsed in recent years, as shown below. The U.S. in 2012 had less than half as many public corporations as it did in 1997. As we will see, this is not simply due to consolidation and mergers. Westinghouse, ITT, Eastman Kodak, Circuit City, Blockbuster, Borders, Lehman Brothers, Washington Mutual and many other household names are gone (or mere stubs of their former selves), and they are not coming back. 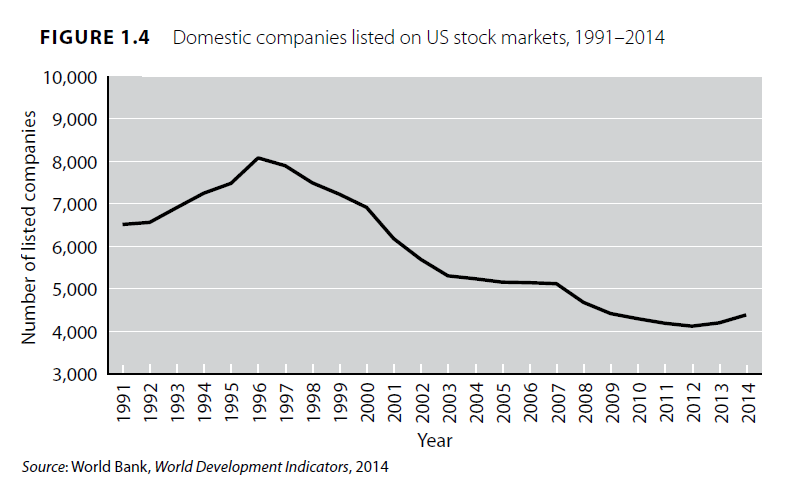 The corporation is not an eternal institution, but a transient one, at least in the long sweep of history. Corporations survive if they have an economic rationale and their revenues can cover their expenses. They are not supernatural beings like vampires (their unlimited lifespan notwithstanding). If they can’t cover their costs, and there are better ways of doing what corporations did, they will eventually die. If Netflix, with 3,700 employees, can provide videos more cost effectively than Blockbuster, which had over 80,000 employees in 2004, then Blockbuster will perish. As we will see, the winner need not be a corporation, or even a for-profit business: If Wikipedia does a better job than Encyclopedia Britannica, then the 240-year-old institution will close (unless it finds a sugar daddy indifferent to profit). There is no crying in baseball, and there is no sentimentality in the corporate world.

The corporation is primarily an economic institution, one whose time — at least in many domains of economic life — may have passed.

The major claim of “The Vanishing American Corporation” is that the public corporation fit well with the requirements for doing business in the 20th century, but is an increasingly bad fit for 21st century business. Corporations are tools for getting things done under particular circumstances, like monarchies, or diesel trucks. Although we might treat the corporation with reverence as a social institution, like the church or the family, it is primarily an economic institution, and one whose time — at least in many domains of economic life — may have passed.

Left: The dirty outline where the sign hung for a Blockbuster movie rental store. Photo by Rick Wilking/ Reuters

Jerry Davis is the Wilbur K. Pierpont Collegiate Professor of Management at the Ross School of Business and Professor of Sociology at the University of Michigan. Davis’s research is broadly concerned with corporate governance, finance and society, and new forms of organizations. He is the author of "The Vanishing American Corporation: Navigating the Hazards of a New Economy."