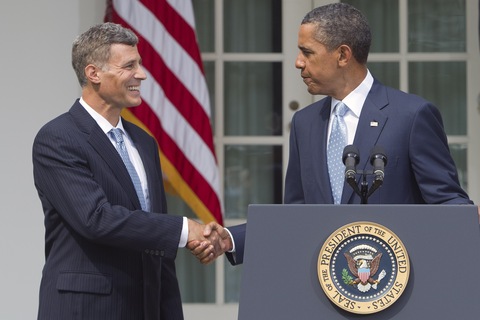 What can the music industry teach us about America’s economic inequality and the state of upward mobility?

Alan Krueger, outgoing chair of President Barack Obama’s Council of Economic Advisers, spoke at the Rock and Roll Hall of Fame in Cleveland, Ohio, last month about inequality in America and ways that the president’s economic policies are supposedly strengthening the middle class.

The setting for his speech wasn’t coincidental. Krueger drew on his 25 years of teaching to explain how U.S. economic inequality, with wealth concentrated among the lucky few, mirrors the rock ‘n’ roll industry. Below are some excerpted portions of “Land of Hope and Dreams: Rock and Roll, Economics and Rebuilding the Middle Class.” For the full speech and accompanying graphs in PDF form, click here, or you can read it on the White House website.

This is the first in a series of three posts examining economic inequality in America. Next, we’ll hear a very different perspective from Greg Mankiw, a chair of the Council of Economic Advisers under George W. Bush.

First, Krueger introduces his take on how persistent economic inequality reduces upward mobility with an explanation of the music industry:

The music industry is a microcosm of what is happening in the U.S. economy at large. We are increasingly becoming a “winner-take-all economy,” a phenomenon that the music industry has long experienced. Over recent decades, technological change, globalization and an erosion of the institutions and practices that support shared prosperity in the U.S. have put the middle class under increasing stress. The lucky and the talented — and it is often hard to tell the difference — have been doing better and better, while the vast majority has struggled to keep up.

The music industry has undergone a profound shift over the last 30 years. The price of the average concert ticket increased by nearly 400 percent from 1981 to 2012, much faster than the 150 percent rise in overall consumer price inflation.

At the same time, the share of concert revenue taken home by the top 1 percent of performers has more than doubled, rising from 26 percent in 1982 to 56 percent in 2003.

This is an extreme version of what has happened to the U.S. income distribution as a whole. The top 1 percent of families doubled their share of income from 1979 to 2011.

In 1979, the top 1 percent took home 10 percent of national income, and in 2011 they took home 20 percent. By this measure, incomes in the entire U.S. economy today are almost as skewed as they were in the rock ‘n’ roll industry when Bruce Springsteen cut “Born in the U.S.A.”

In my talk, I will focus on why these dramatic changes are taking place and explore their consequences. I will also describe President Obama’s vision for providing more opportunities for middle class families and those struggling to get into the middle class.

I should be clear about my overall theme: while the U.S. economy is recovering from the worst financial and economic crisis since the Great Depression, we must also take steps to strengthen the middle class and provide more opportunities for those born to less fortunate circumstances. If we don’t, we will fail to live up to our promise as a nation and be susceptible to the kinds of forces that created economic instability in the past.

To rebuild the economy from the middle out, the private sector will have to step up and reinvigorate the norms and institutions that have supported inclusive growth in the past. The government has an important role to play as well, but with severe budget constraints and limited political will, the government can only set the conditions for the private sector to grow, and provide more jobs and opportunities for middle class families. It is, to a considerable extent, up to private sector businesses, organizations and communities to ensure that economic growth leads to widely shared prosperity and a decent living for the vast majority of our people.

As Krueger demonstrates with the music industry, luck can have a lot to do with who rises to the top, and the same is sometimes true of who pulls in the big bucks in our economy, he argues. And just as in the music industry, where the norm for what people are willing to pay for concert tickets has changed, there’s been an evolving norm of fairness that, he explains, has skewed the way wealth is distributed in the workplace, therefore exacerbating economic inequality:

The notion that profitable companies should share some of their success with their workforce used to be ingrained in U.S. companies. Earlier studies have found that companies and industries that are profitable tend to pay all of their workers relatively well, the managers as well as the janitors. In economics we call this “rent sharing.” While this is still the case, the practice has been eroded.
…

It is not hard to find reasons why the institutions and practices that long enforced norms of fairness in the labor market have been eroded. At a time when market forces were pushing an increasing share of before-tax income toward the wealthiest Americans, the previous administration cut taxes disproportionately for the well off.
…

…(T)he three-decades’ long stagnation in real income for the bottom half of families threatens our long cherished goal of equality of opportunity. In a winner-take-all society, children born to disadvantaged circumstances have much longer odds of climbing the economic ladder of success. Indeed, research has found that countries that have a high degree of inequality also tend to have less economic mobility across generations.

This is shown in the next chart, which displays a plot of the degree of income mobility across generations in a country on the Y-axis (the intergenerational income elasticity) against a measure of the extent of inequality in that country in the mid-1980s (the Gini coefficient for after-tax income) on the X-axis. 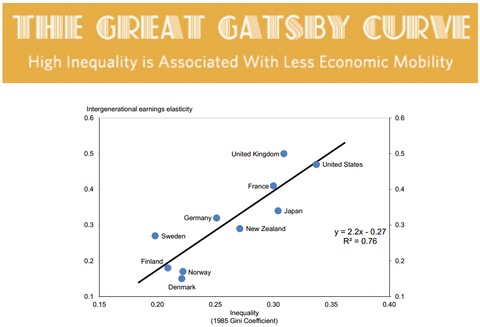 A little over a year ago, I called this relationship “the Great Gatsby curve” because F. Scott Fitzgerald’s novel highlighted the inequality of the Roaring ’20s and class distinctions — I had no idea they would remake the movie as a result!

Each point in the graph represents a country. Higher values along the X-axis reflect greater inequality in family resources roughly around the time that the children were growing up. Higher values on the Y-axis indicate a lower degree of economic mobility across generations. The points cluster around an upward sloping line, indicating that countries that had more inequality across households also had more persistence in income from one generation to the next. Note that the U.S. is on the upper right of the line, indicating that we have both high inequality and low mobility.

The rise in inequality since the 1980s is likely to move us further out on the Great Gatsby Curve.

You can read Krueger’s defense of how Mr. Obama’s policies are rebuilding the middle class, and how a robust middle class strengthens the economy, at the end of his full speech.