Save the Pensions: Tax the Rich

EDITOR’S NOTE: We received a number of responses from viewers like you regarding last week’s broadcast story, “In Tiny Rhode Island, a Massive Public Pension Crisis Looms” and the Making Sen$e web piece, “Paying For Public Pensions.” So, over the next few days, Paul will be answering some of the questions and notes we received via Twitter, email and in the comments sections on our site.

Please instruct Mr. Solman to step up and meet the News Hour level of rigor that we all have come to expect. This is not very difficult, he must look at the actual causes of the shortfalls experienced by the states. He simply blames the state’s pension systems. Why doesn’t he consider the possibility that at some point we must stop cutting taxes for the rich and have them pay their fair share?

Not addressing other possibilities to resolve this monumental problem converts him into the right’s mouth piece. Every time I see his pieces discussing this issue I feel compelled to check the channel I am watching to make sure my TV did not accidentally drift into Fox News.

Paul Solman: There’s only so much one can cover in an 8 – 10 minute news story, Mr. Populin. We were simply trying to sketch the issue of pension underfunding in Rhode Island. But it’s true: taxes there have been cut for high earners on both income and capital gains in recent years. Restoring taxes to prior levels would make a sizable dent in the state’s deficit, at least in the short run. Tax cuts weren’t mentioned by any of our interviewees, but we ought to have included wealthy taxpayers as a separate constituency among those pitted against one another in this battle: state employees (and their retirement benefits); state programs; state taxpayers.

Question: I have the greatest respect for those working so hard at the PBS NewsHour to bring an unbiased view of the day’s news stories. However, I thought you really missed the mark in tonight’s story of Rhode Island and public pensions. I’m going to guess that Rhode Island, like many other states, including Wisconsin, has been handing out tax cuts, giving both the wealthy and corporations all sorts of subsidies and borrowing to pay for today’s services so the “no new taxes” pledge can be kept — no matter what the cost to our children or our current society.

Why didn’t you interview three wealthy individuals and have them justify why they received/deserved those tax cuts and what they thought the costs of those tax cuts were to Rhode Island’s education, social services, etc.? Or, how about three CEOs telling us why their corporations deserved the subsidies they received and relate that to cuts for those living in poverty. Then, perhaps you could interview the individual in the home for boys that was shut down, and ask her to address how tax cuts for the wealthy and corporate subsidies are responsible for taking money from education, human services, etc.

Why is it that the pension issue in Rhode Island was framed in the way that it was? I really expect a deeper, more complex, and more complete view from the PBS NewsHour than simply accepting a framework advanced by the very sectors of our society that have helped run us into this ditch.

I count on all of you to bring me new ways to think about the most pressing issues of our day. Please rethink this one.

Paul Solman: Looking into the Rhode Island tax cuts a bit more deeply, I came upon a report from “The Poverty Institute of the Rhode Island College School of Social Work.” It estimates the cost of recent tax cuts for the state’s wealthy that, if I read the numbers right, are somewhere around $80 million dollars for Fiscal Year 2011. That’s hardly small change, especially for the nation’s smallest state. But Treasurer Gina Raimondo, who seems like anything but an ideologue, reports a budget deficit of $300 million. In short, tax cuts don’t seem to be the main problem.

Question: Paul Solman’s piece on state budget problems immediately took raising taxes off the table. After reading the headline on USA Today Monday, Feb. 21, 2011, “For the Wealthy, Luxury is Back,” I wonder why increasing taxes, or getting rid of the Bush tax cut for the wealthy, is immediately assumed to be a no-go? The article states that wealthy Americans seem to have decided that it is OK to splurge again. The only people left who can withstand any more cuts are the wealthy. Continuing to cut benefits from the middle class, poor and elderly is unsustainable. Each cut in health care, salaries and pensions means more people will need the very social programs the Republicans are also trying to cut.

I would love to know what the tax situation is now. How much are the wealthy and corporations paying in taxes to the states and the Feds to help alleviate the horrendous problems facing our country? Where is the media coverage on this story?

Paul Solman: Your point about the unsustainability of benefit cuts is a good one, Ms. Harris, and an example of what economists often call the law of unintended consequences. Take people off Medicaid and they’re less likely to go to the doctor, meaning less preventive care, worse health, overcrowded ERs — greater costs in the end. That has long been the economics argument for covering the uninsured.

As to the issue of “cutting taxes for the rich,” it is, well, a rich one. I can’t find the data you ask for about states, but I’ve found a chart from the non-partisan Tax Policy Center that may be of some interest. It looks at the top marginal federal (not state) income tax rate for individuals. 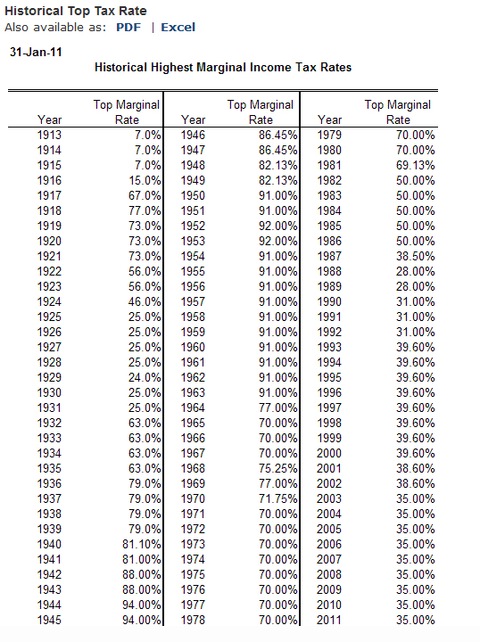 For a more graphic visualization, try this, through 2003. To bring it up-to-date, just extend the line at 35 percent. 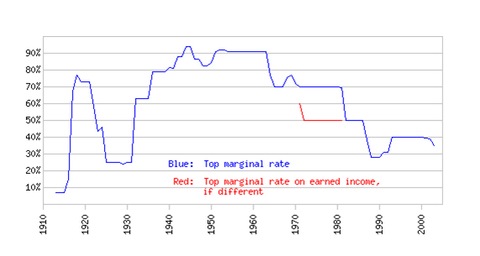 I notice, just eyeballing the data, that higher rates seem to prevail in the period of greatest (and most equal) economic growth (1940-1970) while lower rates coincide with slower, less equal growth. The first thing you learn in statistics class is worth remembering in this case: correlation does not mean causation. That is, just because income tax rates were high in the good times, it doesn’t mean they caused the good times, any more than lower rates necessarily caused an economic slowdown. Maybe, in fact, it was the other way round: a slowdown leading to desperation leading to lower rates.

Question: Paul, how can you do a report on public pensions and not discuss the fact that the economy is in abyss because of reckless behavior on Wall Street? Is the venture capitalist Rhode Island treasurer going to have a problem with her pension, or did she profit from the housing bubble economy? Everyone says “Where are we going to get the money?” Why not get the money back from the masters of the universe that profited from the system they deregulated? Why not audit the incomes of all who made over $500,000 in the last ten years and if their money came from companies involved in the reckless behavior, recover the money from them? Liquidate their assets and return them to the treasury. This would help solve the deficit problem and it would encourage these people to behave more responsibly in the future.

Why should working-class and middle-class people pay for the mistakes of the financial elite?

Paul Solman: Ah, “clawbacks:” Recovering false profits from those who took the money and ran. Emotionally appealing idea, perhaps, but exactly how do you go about it? Or even approximately? Look how much trouble the Madoff trustee is having with profits that were completely fake. Which profits were real? Who knew what when? Dick Fuld of Lehman made terrible bets on housing, believing they were good bets. How much are you going to claw back from him? Suppose I made $600,000 as the head of Human Resources at Goldman Sachs? Was the CEO of GM involved in “reckless behavior”?

You might check out our story on clawbacks and AIG from April of 2009, however, in which your argument was made by a lawyer for the AFL-CIOs.