Why seasonal businesses depend on foreign workers

Editor’s note: Restauranter Mac Hay employs about 70 Jamaican workers to be the dishwashers and cooks in his three restaurants and three seafood markets on Cape Cod. And to do so, he relies on H-2B visas — temporary work visas that grant employers permission to supplement their American workforce with a limited number of international workers. But this summer, businesses on the Cape are struggling with a dearth of workers after Congress restricted the number of these visas. There simply aren’t enough American workers, Provincetown business owners say, pointing to an unemployment rate of 4.2 percent and a year-round population of just 3,000.

Economics correspondent Paul Solman met Hay in Provincetown, Massachusetts, where H-2B visas are popular among business owners. Hay says the visas keep the seasonal economy there afloat. Hay has become politically active on the issue, building a coalition of small business owners in Cape Cod and New England to lobby Washington to support the program.

“It’s become so important not just for the season, but for the future of Cape Cod. For the future of families like mine that depend on these businesses,” he told Paul.
The shortage of H-2B visas has hurt not just Cape Cod but also Maryland’s crab-picking and oyster-shucking houses, Texas’s shrimpers and Michigan’s tourist destinations. Below, Paul and Hay discuss the importance of the H-2B visa program and why so many business owners opt to hire foreign rather than American workers.  Read their conversation below, and tune in to tonight’s Making Sen$e report, which airs every Thursday on the PBS NewsHour.

The following conversation has been lightly edited for clarity and length. 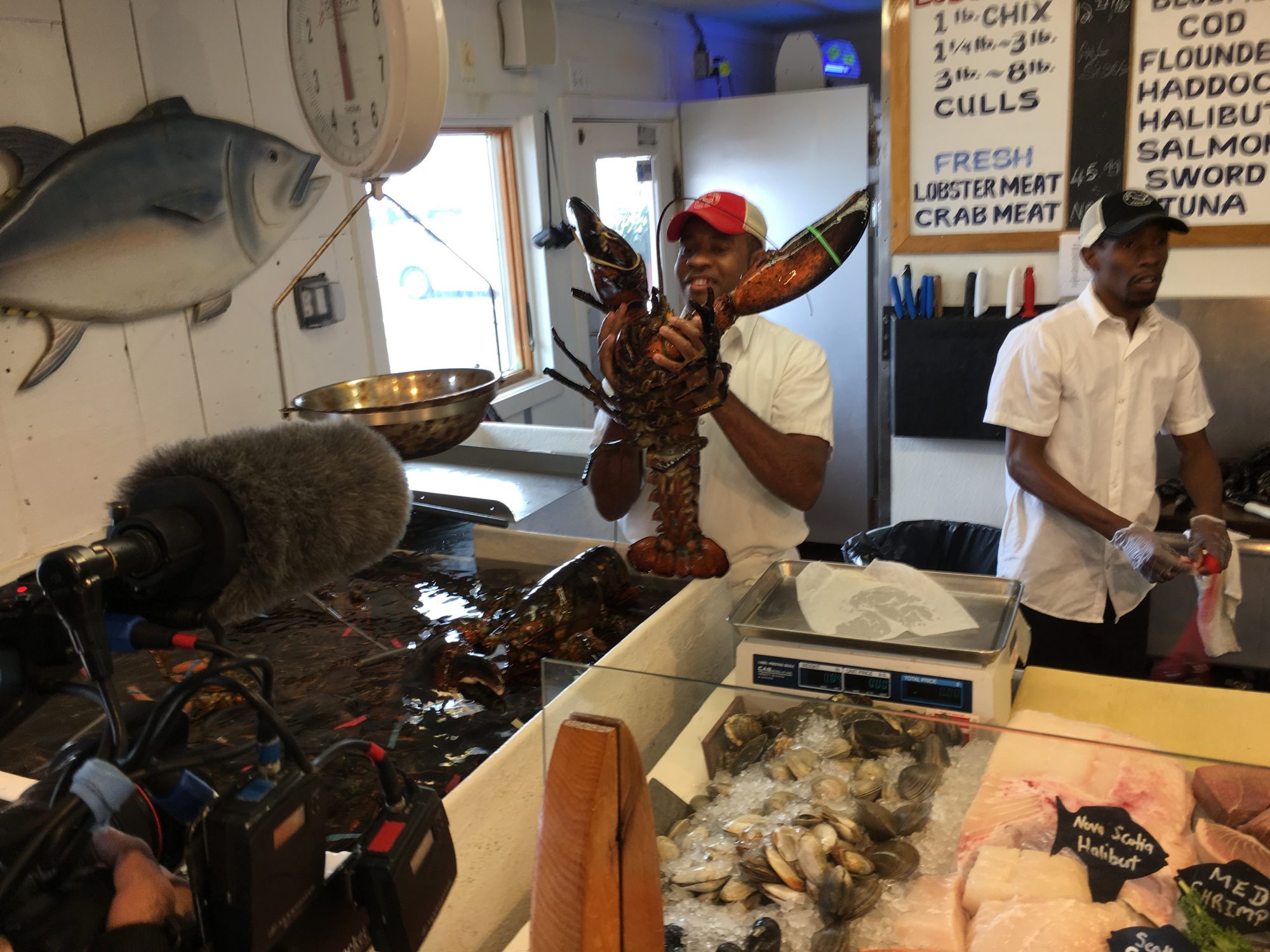 A worker holds up an 18-pound lobster. Photo by Sarah Clune

PAUL SOLMAN: So why is this program important to you?

MAC HAY: The H-2B program is the spark that basically feeds our economy. The workers that come in on this program do the jobs that we can’t find American workers for — cooks, dishwashers, prep cooks. That doesn’t mean that these jobs are necessarily low-skilled; we need our cooks to have skills. But finding the American workers to fill those positions is virtually impossible.

Trying to bring workers from Jamaica or Mexico is incredibly challenging, incredibly expensive and time-consuming. And now because of the way that the government has treated this program, it’s incredibly stressful.

PAUL SOLMAN: But there are brokers, right?

“The H-2B program is the spark that basically feeds our economy. The workers that come in on this program do the jobs that we can’t find American workers for — cooks, dishwashers, prep cooks.”

MAC HAY:  Well, there are firms you can use to help recruit. We now have been bringing back the same workers year after year, so essentially, we don’t need any of the recruiting firms. So we go directly to the workers.

Originally, our workers were already in Provincetown or Wellfleet [on Cape Cod] and they came to us. They were working for someone else on an H-2B visa, and they said, “We’d like to come back next year and work for you.” So I started with four or five H-2Bs 12 years ago, and now we have up to 65, 70 workers through the program.

PAUL SOLMAN: Is that because they’re referring their friends?

MAC HAY:  Their family members, their friends. If you want to build a legitimate business, you can’t be grabbing people from random places that may or may not work out, that may or may not have the skills that we’re looking for. We’re trying to establish real businesses on the Cape. We’re not trying to be this two-month just get in, grab as much money as you can and get out. We’re trying to be a sustainable business that creates jobs year-round. And that’s what the H-2B program does. Like I said before, the economy is an engine. The seasonal economy is an engine that gears up extremely quickly. And if you don’t have that core staff, that spark that ignites the economy, the rest of it isn’t going to function.

PAUL SOLMAN: But why shouldn’t you, business owners like you, make an effort in places like Franklin, Canton, Foxborough – nearby towns – and see if you can find American workers who then will refer their friends year after year and come back?

MAC HAY: We’ve tried programs reaching out into other communities. It’s just not realistic. Workers from New Bedford are looking at a 2.5 to 3 hour commute each way in the middle of the summer.

PAUL SOLMAN: But you put up the foreign workers, right?

MAC HAY:  Sure, if they’re willing to relocate and stay down here. But from our experience, the reality is Americans don’t want to relocate their life for six months. Some will, but not enough. And like I said, if they’re willing to do it, I’m more than happy to hire them. But the issue is longevity. Are they committed to us for not just one season but two or three or four or beyond? Are they actually willing to relocate, to move down here for what amounts to a good paying job? It’s not a front of house position where you make $30, $40, $50 an hour. Pay ranges from a dishwasher at $12.50 to a cook who can make $17, $18 an hour plus overtime. So they’re making legitimate wages. We’re not talking about $8 an hour wages. 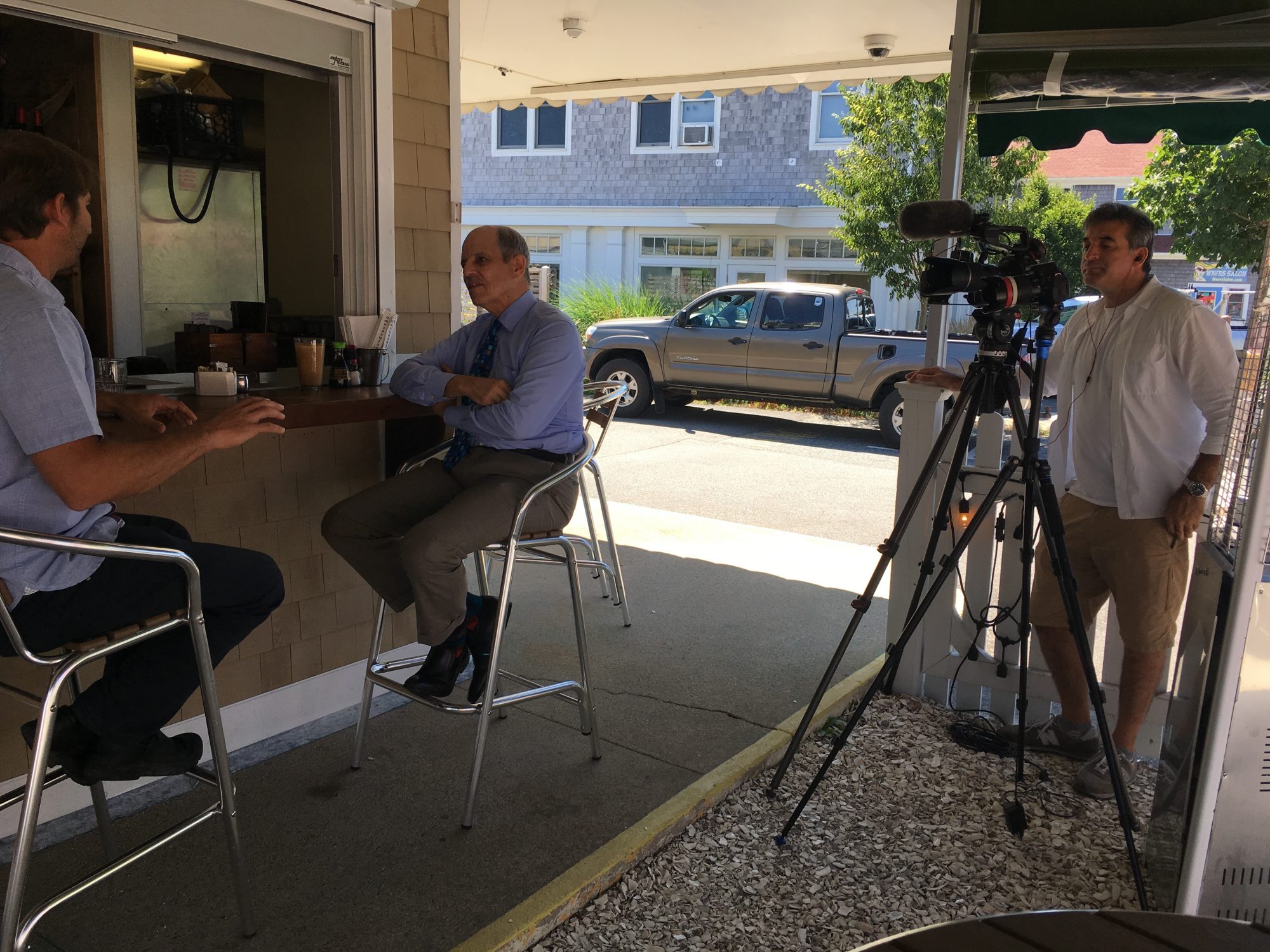 PAUL SOLMAN: So then what’s the disconnect here? Are you saying there just isn’t a way for people like you to connect with Americans who would want that wage?

MAC HAY:  It is extremely difficult. The recruiting process that we go through, we have to advertise these positions on the job banks in Massachusetts. We advertise in newspapers. They have to be in our region, in our local newspapers in the Cape Cod area. We have to advertise on the job bank in Massachusetts. So an American could have gone on the Massachusetts workforce job site and looked at all of these vacancies – and believe me, every other business that uses the program on the Cape is advertising for these positions.

PAUL SOLMAN: Because you have to.

MAC HAY:  Because we have to. And not just we have to; we want to. We want to see who’s going to apply for these jobs. And I can tell you this. In the 12 years that I’ve been using this program, I’ve advertised over 50 job postings. Four or five people in 12 years have responded to the advertisements. And they run for two weeks at a time.

“They want to work hard, they want to make money. They send the money either back to their families or to build a house at home, to put their kids through school, to better their lives. Those are the workers that I want, whether they’re American or foreign.”

So the labor shortage down here is real. This is not a program to circumvent paying higher wages. This is not a program to circumvent not trying to hire American. If you take a look at the history of immigration labor in the United States, this goes back before the visas were required to work in the United States. Back when Mexicans used to come up into the farms and the fields for the season and then return. So the H-2B visa was born out of necessity to keep an immigrant or a non-immigrant labor program going, to help fuel the businesses that need that program.

PAUL SOLMAN:  What do you mean?

MAC HAY: They come here because they respect the opportunity. They want to work hard, they want to make money. They send the money either back to their families or to build a house at home, to put their kids through school, to better their lives. Those are the workers that I want, whether they’re American or foreign. I don’t really care.

I want people who are invested in making themselves better. And if I can find them here in the United States, that’s great, but we don’t have them here. We just don’t have them. We have some, we have a few, but where we are in a seasonal environment, where our population in the winter is 2,000, and it goes to 30,000 in the summer. Where does the workforce come from to fuel the businesses that service those people?

Watch Making Sen$e’s broadcast report on H-2B visas and the impact they have on Cape Cod’s seasonal economy.

Left: Cape Cod businesses are struggling with a dearth of workers this summer after Congress restricted the number of H-2B visas -- temporary work visas that grant employers permission to supplement their American workforce with a limited number of international workers. Photo by Lisa Quinones/Reuters