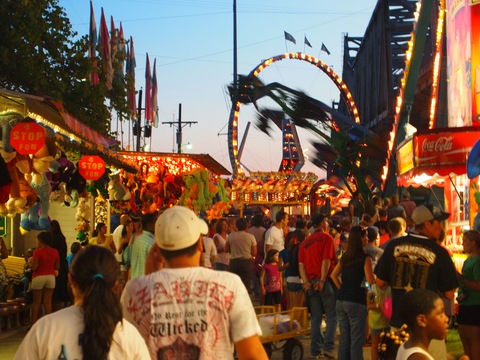 MORGAN CITY, La. | Some people might find it odd that this city near Louisiana’s southern coast has a Shrimp and Petroleum Festival. Somehow the two don’t seem to go together.

But some local citizens get a bit testy if you ask them about that juxtaposition. They say it’s really a harvest festival, and that people here “harvest” oil from the sea in the same way that they harvest shrimp.

It started out as just the Shrimp Festival 75 years ago. But after oil companies began drilling wells offshore in 1947, the oil business gradually overtook shrimping as the area’s main economic engine. So the festival’s name was changed to Shrimp and Petroleum in 1967.

The celebration is getting a lot of unusual attention from the national and international press, primarily because of the BP oil disaster. Local newspaper editor Steve Shirley told us he’s been getting a lot of questions about why shrimpers and other fishermen aren’t angry with people in the oil business. He patiently explains that they’re often the same people. They work on the well platforms and fish on their days off.

Although the Macondo well oil never fouled Morgan City’s beaches — the blown-out well was too far east — it’s still having a major impact on the town’s economy. Shrimper Matt Tune has docked his boat until October because nobody’s been catching anything. In fact, it’s been so bad that Tune says the shrimp that people will be eating during the festival are coming from the East Coast, and he’s somewhat embarrassed by that.

The prospects for the oil business aren’t much better. Bill New runs a business that turns flat steel plates into pressure vessels — large tanks — that are used in offshore installations and also on barges. He’s worried that the ongoing federal moratorium on deepwater-drilling operations will eventually lead to a lot of people losing jobs, because he thinks the companies can’t afford to wait very long before having to move their rigs elsewhere.

The production platform fire Thursday threw a lot of people for a loop — at least until more information started to come in. Some told us they were afraid the incident would provide more ammunition for those who support continuing the moratorium, which is scheduled to end in November. Many here had hoped it would be lifted this month. 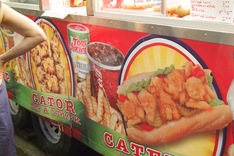 The festival opened Thursday night and really gets underway in earnest Friday. Mayor Tim Matte says they’re going to put all those worries aside and “kind of just enjoy each other’s company, enjoy the music, enjoy the food.” That includes the “Alligator on a Stick” being sold on the carnival midway.

Tom Bearden will have more from the Shrimp and Petroleum Festival on Friday’s NewsHour.