The economy grew at an annual rate of 1.45 percent in the first half of this year according to newly released data. However, this estimate is somewhat misleading, because — let’s not forget — population has been growing in the meantime as well at an annual rate of about 0.75 percent. So this means that on a per capita basis the growth was closer to 0.7 percent, and that’s not a very reassuring result; surely not enough to make itself felt on Main Street.

In any event, such short-term fluctuations are not very meaningful for interpreting what is really going on in the economy. There are obviously too many possibilities for error and random events to sneak in and skew the results in unknown ways. Hence, it is much better to focus on the long-run trends. Former Treasury Secretary and Harvard economist Larry Summers has been doing just that. One of the most prominent of the public intellectuals, he has been arguing for well over a year that we should recognize that the economy has morphed into one that is no longer capable of growing in the way that it did during the second half of the 20th century and that it won’t again unless we happen to be in a financial bubble.

We were growing decently between the mid-1990s and the turn of the century, but, let’s face it, it was essentially a bubble economy that ended in the famous dot-com fiasco and was followed by a short recession in 2001. When the recession was over the economy was bustling once more, but again, it was fueled by unsustainable finance with easy money, loose underwriting standards, irresponsible lending and careless borrowing that — as we well know — ended dreadfully in 2008. And the economy has been sputtering along ever since.

In America, inequality begins in the womb

Crucial to Summers’s argument is the observation that during the years prior to the meltdown of 2008 the economy was by no means overheating as one would expect in a boom. In spite of the easy-money policy of the Federal Reserve, the explosion of debt as people withdrew their savings from their house equity, the trillions of dollars worth of subprime lending, and consumers living in a fantasy world giddy from a false impression of wealth, inflation was moderate and so was wage growth. All of these factors should have fueled aggregate demand. However, as Summers explained, “Capacity utilization wasn’t under any great pressure. Unemployment wasn’t under any remarkably low level. Inflation was entirely quiescent. So somehow, even a great bubble wasn’t enough to produce any excess in aggregate demand.” In short, something had gone wrong.

Summers’s thesis was a “radical manifesto,” according to Nobel Prize winning economist and New York Times columnist Paul Krugman, noting that, “we may be in an economy that needs bubbles just to achieve something near full employment.” In the absence of bubbles the economy will continue to meander along but without any spectacular results of the bygone century. And that is exactly what we had in the first half of 2015.

So we should not focus on the quarterly fluctuations and instead note that it has been fully two decades since the economy grew at a decent clip supported by sustainable finance. That is what secular stagnation looks and feels like.

Summers is not alone: Northwestern University economist Robert Gordon’s research supports his thesis. Gordon’s analysis of the empirical evidence indicates that productivity growth has slowed considerably. He calculates that productivity per worker has been growing at a rate of 0.76 percent per year between 2004 and 2013, which is nearly a third of the 20th century average of about 2 percent per year. As a consequence of this productivity slowdown, he forecasts that the real disposable per capita income of the bottom 99 percent of the income distribution will grow at a negligible rate of 0.2 percent. That is to say, it will be difficult to distinguish it from utter stagnation.

Gordon cites a number of “headwinds” giving rise to this slowdown including an inferior elementary and high school educational system and an extremely skewed distribution of income, which keeps purchasing power out of the hands of those who would like to spend and into the hands of those who have nothing more to spend it on. With such structural problems and slow productivity growth, we should not expect GDP to grow like it did in the prior century.

A corollary of Gordon’s finding is that innovation has run out of steam. No use expecting rapid growth from the kind of innovations that we’ve been getting for the last ten years or so. And there is nothing on the horizon that will likely reverse that pattern. The great innovations associated with discoveries like the steam engines, airplanes, and automobiles are a thing of the past. Many of these breakthroughs brought forth new products and new industries and had substantial impacts on the productivity gains in other sectors, ripping through the economy like a whirlwind.

There are no such low-hanging fruit left anymore. Sure we have some innovation, but the Apple watch will not increase productivity in a meaningful way nor will it create more than a handful of jobs in the U.S. (It’s produced in Asia after all.) The increasingly popular ridesharing/taxi company Uber will grow and profit, but at the expense of low-wage taxi drivers making a meager living. Don’t expect such innovations to bounce the economy out of its slothful mood to flourish.

So although the recession technically ended in June 2009, it sure still feels like recession for a good many of us and for good reason. We are still producing $1 trillion less than what our GDP was projected to be before the recession hit. And we should expect a recession again soon since the average elapsed time between the last three recessions (reckoning from trough to peak) was eight years, but the last one lasted only six years. Given that it has now been six years since the end of the last recession, I’d say it is a fair bet that we ought to start thinking about what we would do if a recession does rear its ugly head.

That will be a challenge, in part, because of ex-Fed chairman Ben Bernanke pumped some $3.6 trillion into the financial sector with little if anything to show for it on Main Street, but it did increase asset prices on Wall Street. Even his successor, Janet Yellen said that asset prices are “quite high.” Unfortunately, Bernanke’s legacy is that the Fed is now out of ammunition if a recession were to strike.

Normally under such circumstances, such as in 2001 and 2008, the Fed would step on the accelerator by lowering interest rates which, in turn, would make auto loans cheaper and mortgages more affordable, and the economy would get back on track. But the interest rate that the Fed charges member banks is already near zero — and has been so for six years — so it cannot get any lower for all practical purposes.

So what are the other options? A fiscal stimulus? The likelihood of this Republican-led Congress voting for such a stimulus is slim to none. When the next recession hits we will likely be floating without a Keynesian rudder — not at all a pleasant prospect.

So what is one to make of the 0.7 percent per capita real GDP growth rate in the first half of 2015? I’d say that this is what secular stagnation looks like. That is what a sour economy looks like. You can forget the annual growth rates of real GDP of 4 percent or above like we were used to in the 1970s, 1980s, and 1990s. The last time we had one of those was fifteen years ago and it was accompanied by bubble finance.

Now, one does not have to be a sophisticated statistician to figure out that if during the final three decades of the 20th century, we had real GDP growth rates above 4 percent every other year, but in the first 15 years of the 21st century we had just one single such episode, then the economic processes generating such outcomes must have changed. Such dramatic shift is not likely to have been merely a random occurrence.

Shifting to a per capita basis, note that between 1970 and 2000 the growth rate in real GDP per capita averaged 2.4 percent per year, while even during the run up to the subprime mortgage crisis when consumers were delirious from their capital gains and easy access to loans, growth still slowed to 1.6 percent per year. And even if one leaves the downswing of the Great Recession out of consideration, the growth during the so-called “recovery” was slower still at 1.4 percent per year, just 60 percent of what it was during the three decades of the late 20th century. 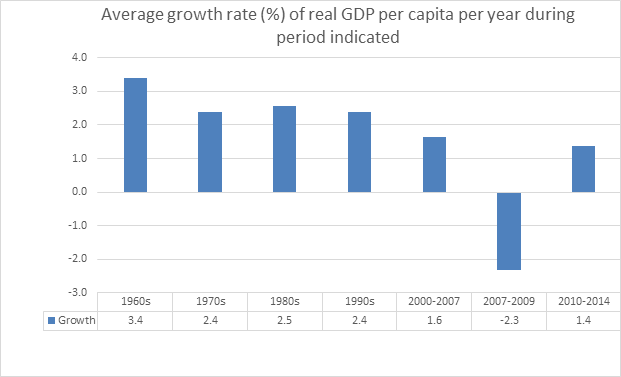 In short, as Summers and Gordon argue, the new normal is nowhere near the halcyon days of the late twentieth century. Moreover, the baseline three decades also had its recessions: four to be precise, and in spite of including those in the calculation, baseline growth rates seem head and shoulders above the new normal.

The pundits are claiming that we are recovering, but six years after the end of the last recession, I think we need a new vocabulary to describe the economic situation. The recovery euphemisms won’t do. Krugman’s description of it as a “sour economy” comes close to describing today’s real existing economy. Robert Skidelsky, the foremost authority on Keynes suggests that, “With depressed profit expectations, an economy could remain in a semi-slump for years. There would be alternating periods of recovery and collapse, but this oscillation would occur around an anemic average level of activity.”

In other words, the epoch of the Industrial Revolution that started some quarter of a millennium ago is over. Forget it, today’s economy is an entirely new ballgame. That’s a brutal realization, but the sooner we can get used to it the sooner we can respond to the new challenges in a rational fashion.

We should accept that secular stagnation has become the new normal. We should also ponder the implications of Gordon’s thesis of the productivity slowdown. We need to recognize that we’ve mutated into a new type of economy and come to terms with the slow growth that such an economy is likely to produce. Until we do that, we won’t be able to think creatively about how to respond to the new normal with new ideas. If we cannot bring ourselves to do that the American Dream will remain just a mirage for so many of our compatriots. Waiting for the golden age of the post-World War II 20th century to return, quarter after quarter, makes about as much sense as waiting for Godot.

Left: We need to recognize that we’ve mutated into a new type of economy and come to terms with the slow growth that such an economy is likely to produce. Until then, the American Dream will remain just a mirage, argues John Komlos. Photo by Bob Chamberlin/Los Angeles Times via Getty Images