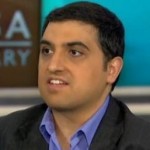 Editor’s Note: When Sree Sreenivasan lost his job as the chief digital officer at the Metropolitan Museum of Art, he turned to Facebook. In a post, he explained his departure from the Met (the museum was undergoing “financial restructuring”), his plans for what would come next, and a form for friends to fill out to tell him what to do next, adding “If you want to invite me to anything, I now have time, including for meaningful cups of coffee and drinks.”

The response was overwhelming with more than 1,000 reactions and nearly 500 comments, and for the next month, Sreenivasan embarked on a public display of his job search and networking. For Making Sen$e’s latest report, special correspondent Roben Farzad traveled to New York City to meet with Sreenivasan and see what other job seekers could learn from him.

And it’s worth adding that Sreenivasan now has a new job: He was hired by Mayor Bill DeBlasio as the city’s third Chief Digital Officer on Aug. 1. Read Roben’s conversation with Sreenivasan below, and tune in to tonight’s Making Sen$e, which airs every Thursday on the PBS NewsHour.

ROBEN FARZAD: What is the takeaway of all of this?

SREE SREENIVASAN: We forget that if this happened 10, 15 years earlier, I would have had a handful of friends that I could turn to, and my network would be very limited. And now I have the world to help me, and my message to people watching is that they could have a version of this. Some may be bigger, some may be smaller, but you have a version of this if you understand the internet, if you understand technology.

“It’s important to have control of your narrative.”

Another point is that when anyone says, “Oh, you know so much about this. You’ll easily get a job,” I can give you a couple examples where I thought I was a shoe-in in my own mind, and I didn’t get the job, and that tells you that it’s not easy for anyone.

ROBEN FARZAD: Did you write this Facebook dispatch at a kind of emotionally sober moment, or did you write it in a moment of pique? I know you were hurt, blindsided by what happened. When you look back on it, is this what you intended?

SREE SREENIVASAN: I knew that anything I write would get attention because of my work, and hey, if you have taught 200 journalists a year for 20 years, as I did at Columbia, there are going to be a lot of people out there who will be paying attention. I wasn’t the first to share my news. As soon as the original note was written, sent internally, a reporter had already published it on her blog. So that’s how fast these things happen. But it’s important to have control of your narrative.

Thursday am saying goodbye to @metmuseum, ending my 3yrs there. Sharing via #sree3oh. Here, me on penultimate day. pic.twitter.com/jyLI1a22jL

I knew that this was going to get out there, and I wanted to get some help. I wasn’t happy in any way, in any sense of the word, but I tried to be gracious at a moment when grace isn’t the first thing that comes to you, and I really was worried how people would interpret this. But so far it’s been very positive, and I keep telling anybody I talk to, including clients or companies, “Ignore the trolls, and amplify your fans.”

ROBEN FARZAD: Well, a hater’s gonna hate! But truth be told, you are not truly unemployed, you still have a kind of potluck existence. You still consult, you still lecture at Columbia every now and then, and you have board positions. Are these not paying gigs? Or are they things that you do to keep you out there in the firmament?

“I tried to be gracious at a moment when grace isn’t the first thing that comes to you.”

SREE SREENIVASAN: I am very aware that I am enormously blessed and lucky because of what my network is, what I have done, what my skills are, that I am not like millions and millions of people every day who have lost their jobs and have to struggle to put food on the table the next day. But now I have a sense of what people are going through, though I know that I’m really lucky in what I have in comparison to a lot of people. I do have a network. I have a wonderful family and people are supporting me.

And even within my own industry, I have friends who have been out of work for a long time, and they are now contacting me, saying, “How can we work together? What can we do?” And I would love to find ways to use this moment to help other people. One of the nice things that I’ve been able to do is that because people have reached out to me about jobs, I have been able to hook up some people for job interviews by saying, “Well, this position isn’t for me, but you’ve got to talk to this guy or this gal.”

ROBEN FARZAD: At your most vulnerable, you shared this with the world. It seemed to engender some empathy out there.

SREE SREENIVASAN: For the last few days, I’ve been in this global digital hug, people who I haven’t heard from in years, have said, “I want to help you.”

One of my colleagues said to me that, “One thing you are displaying for your children, the most important lesson, is that resiliency matters, and life isn’t going from one success to another.” In a world where everyone is on Facebook and watching these wonderful vacations and beautiful meals and all this great travel everybody is doing, you get the feeling that everything is perfect, and your own life is perfect. It’s only when you go through something like this and your kids see you in this moment, they understand that their lives aren’t to going to be one set of successes to another. Teaching them that you can, in fact, talk about your problems, is a worthy thing, though I would not have wanted it if I could have avoided it at all.

ROBEN FARZAD: What you have learned so far? What might have you done differently, what didn’t you expect going into this, what things that have blindsided you?

SREE SREENIVASAN: I think that what I have learned is that you have to build your network when you don’t need it, then people can be there for you when you do need it. You have to learn to tell people what you need, and they have to be there for you, and they won’t be there unless you’ve built that network. I tell people that it’s too late to figure out Twitter when a plane has just landed on the Hudson, because you won’t know how it works or anything like that, or I tell people it’s too late to figure out LinkedIn when your company starts having layoffs. I’ve been saying this for years, and luckily, I’ve been using my LinkedIn and building it and building it and building it.

“You have to build your network when you don’t need it, then people can be there for you when you do need it.”

ROBEN FARZAD: What is a LinkedIn connection worth? It’s very different than just as recently as 10 years ago where you’d have to meet people in the flesh and present them with a resume. Now you can call on a person with the hit of a button.

ROBEN FARZAD: What advice do you have so far, especially for people who haven’t availed themselves of the contacts and network that you have?

SREE SREENIVASAN: If you are working right now, don’t be complacent. You need to build out your network, to continue to build the digital skills that are relevant to your industry, to your kind of work now. Like, today, I hope this will prompt you to get on LinkedIn. I think most people think you go on LinkedIn to hunt for a job, which you do, but it’s really a career management tool. But even if you don’t want to do LinkedIn, think about just your email. Reach out to a mentor today, reach out to a former protege of yours or a current protege of yours and drop them note and say, “This is what I’m working on, and I just wanted to say hello.” Because the day you reach out because you’ve lost your job, it’s very hard to reach out to people. So reach out today is a piece of advice I’d give everyone, no matter how comfortable they are in their job or how set they are, because one of the things we’ve learned is that jobs come and go, but your network never leaves.

I hear from my former students often after a long gap, when they need a recommendation for a fellowship or a job recommendation, and that’s too late. That moment when you’ve lost your job, when you reach out, it’s too late. You should be building that network up. And I, of course, want to help anyone I can, but there’s not so much you can do at the moment. So reach out to a mentor, say thank you, and also tell them what you’re up to. And ask yourself: Who are three, four people I want to add in the next month to my network? Go out and meet people, go to networking events.

Left: Sree Sreenivasan showed how a public use of social media and networking can land you on your feet again after losing a job. Photo by Tanya Malott

NewsHour special correspondent Roben Farzad hosts Full Disclosure on NPR One. He was previously a senior writer for Bloomberg Businessweek, where he covered international finance and markets. Follow him on Twitter @RobenFarzad and on Facebook at Facebook.com/FullDRadio.